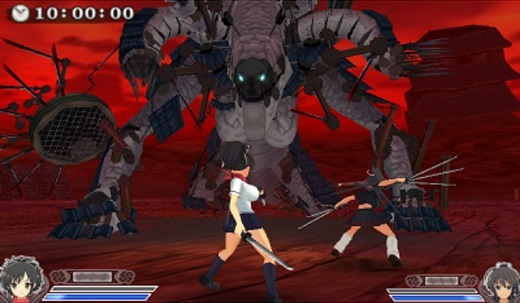 HIGH The new movesets and animations are great.

LOW The enemy AI is way too aggressive.

WTF Why does this seem so sparse compared to what the Vita got?

The bustiest ninjas in video games are back, and they're up to their usual antics in Senran Kagura 2: Deep Crimson. However, this latest installment gives with one hand while it takes away with the other—great new tweaks in formula are offset by basic issues and a lack of content.

For those who aren't familiar with the Senran Kagura series, it's probably best-known for its cast of ridiculously well-endowed female ninjas. While Deep Crimson doesn't make any changes to that aesthetic, there's a lot more to it than just T&A. (Although to be fair, there's loads.)

The game is split into two parts; the real-time combat and the story segments.

When it comes to the fighting, Deep Crimson is a weird beast. The first installment on 3DS, Senran Kagura Burst, was a side-scrolling 2D with a heavy beat-‘em-up flavor. Now comes Deep Crimson. I'd say it's technically in 3D, but the camera is low enough to simulate a side view, so it closely resembles the older 2D predecessor for the majority of play.

Each ninja has a normal and a powered-up mode, in addition to a frenzied status. It changes the way they handle, and the entire cast has new, unique movesets—Katsuragi's energy roller skates handle differently than Homura and her seven swords, Mirai is a sniper with a futa-like special attack, Yagyu fights with giant squid, and Haruka employs a robotic puppet, just to name a few. The variety is great and the animation is excellent.

Also good is the new ability to go into battle with a teammate. Building synergy between frequent cooperators improves their performance, and it's possible to switch between either character at will during a mission. There are also high-powered team-up attacks that deliver big chunks of damage while playing out like brief skits. Teaming is neat.

Before going on with this review, I think it's important context to acknowledge that another Senran Kagura game exists—Shinovi Versus on the Vita. That game came out in 2014 and offered a larger cast, a deeper storyline, better pacing in the campaign, and combat that took full advantage of the third dimension. It was one of my top games of the year, so another Senran Kagura coming after it would have a lot to live up to. Deep Crimson doesn't, and it feels quite strange to get a newer release that offers a lot less content than we got last time.

(…And before Senran fans write me an email explaining that the 3DS and Vita games aren't really in the same series, both versions have the same title, the same characters, the same type of combat, and are the same kind of game. I think a comparison here is fair.)

So where does Deep Crimson fall down? For starters, the combat runs at blinding speed and the AI is extremely aggressive, meaning that the best (and usually only) strategy is to cheese and juggle enemies relentlessly. This undercuts how diverse the characters are, and prevents players from appreciating their nuances in combat. Trying anything other than one or two reliable combos is asking for punishment, and that's a shame.

Apart from the bonkers AI, the story mode stars different characters in each level. This is a fine idea, but Deep Crimson doesn't give enough experience via story missions alone. Shinovi Versus had interesting side missions that got each character up to speed while giving insight into their backstories. Their absence in Deep Crimson is missed, and players who don't want to grind through some of its combat-focused extra modes will frequently hit brick walls in the campaign.

Exacerbating things is the 3DS hardware itself. The screen isn't big enough to give a full view of the battlefield, meaning that enemies are frequently out of sight and it's up to the player to guess where they are. I also had problems using the 3DS shoulder buttons. They trigger a follow-up move that's constantly used, but the buttons just didn't feel responsive enough for this fast action.

Taking all that into account, I have to say that playing Deep Crimson can be a fairly unpleasant experience. On the other hand, it's tough to not be a fan of these ninja girls. The chuckle-rich plot is told in visual novel style with lots of text and minor animation during cut-scenes. The ninjas in the game are divided into two rival schools, and they play it light with jokes and silly moments between bits about demons and a superninja reincarnated to stop them. It's scattered and doesn't deliver much at the end, but I appreciated the goofy tone and cheery, likable cast.

Despite my complaints, I'm definitely a fan of these characters and I'm always happy to get another Senran Kagura. The new moves and team-up mechanics are great, and things that don't take themselves too seriously are in short supply these days. On the other hand, Deep Crimson feels like a big step backwards after Shinovi Versus in most respects, and I just wasn't satisfied with it. It's decent in short bursts, but I have a feeling that it will be quickly forgotten once the Vita's upcoming Senran Kagura: Estival Versus hits. Rating: 5.5 out of 10.


Disclosures: This game was obtained via publisher and reviewed on the 3DS. Approximately 12 hours of play were devoted to the single-player mode, and the game was not completed. Less than 1 hour was spent in multiplayer modes.

Parents: According to the ESRB, this game contains: partial nudity, sexual themes, strong language and violence. Female ninjas fight, but the violence is pretty cartoonish and stylized. Pretty harmless. On the other hand, this game's T&A factor is off the charts. Every character is amply endowed and they all get nearly naked on a very regular basis. Not for little ones!

Deaf & Hard of Hearing Gamers: All dialogue is subtitled, and there are no auditory cues needed to successful gameplay. I spent the majority of my playtime with the sound completely off and had no problems at all. It's totally accessible.