A Million Bullets. A Billion Words. 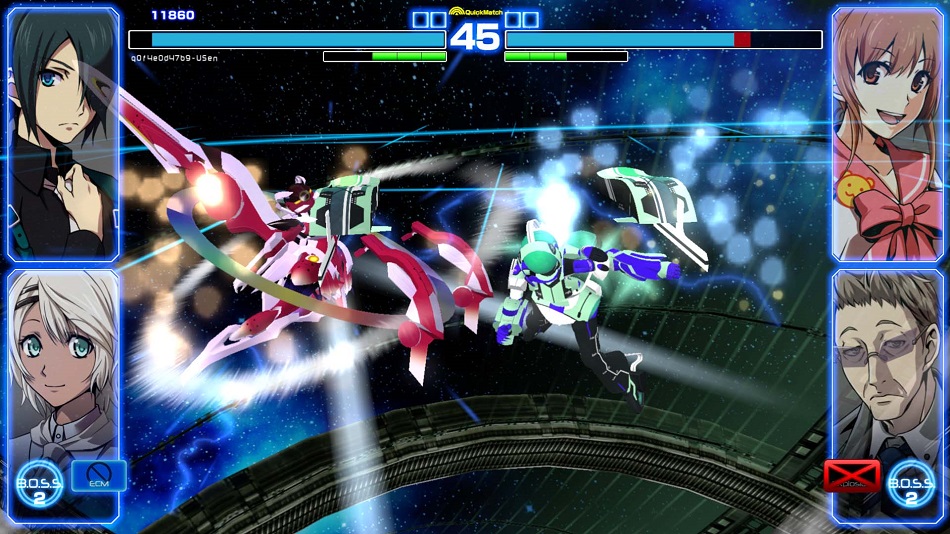 Senko no Ronde 2 is something that’s not easily described, but it’s best described as an unusual cross-pollination resulting in something that’s equal parts bullet-hell shoot-‘em-up and one-on-one fighting game with some incomprehensible anime-flavored story elements sprinkled on top. It’s about as far from mainstream fare as one can get, but that’s not necessarily a bad thing.

I wish I could start this review off by first explaining the story and premise, but I’m at a loss. The arcade mode features random talking heads saying lines that mean nothing without context, and the story mode is actually cut and pasted from a 2010 release. Why it’s included here, I have no idea. And what it’s about? Dunno. It seems like a Visual Novel with too much chatter and too little relevance to the gameplay.

So, about that gameplay… Senko no Ronde 2 fares much better here than it does with its script and characters. While it seems like total chaos at first, what’s underneath all of the flash and distraction is a pretty well-tuned melding of two wildly different things. 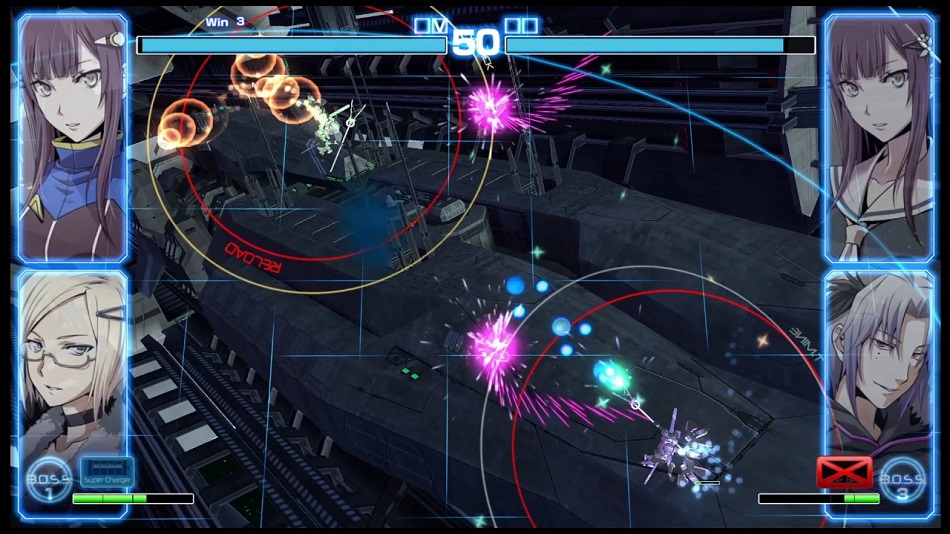 Essentially, players pick a character out of a wide variety of pilots, each with their own mecha suit. Naturally, each one comes equipped with their own unique attacks, special moves, and special-special moves. Once a match begins, combat is top-down rather than side-on, and it’s all about positioning, managing energy, and firing off as many bullets, lasers and missiles as possible. Trying to avoid eating all of those bullets, lasers and missiles is important, too.

The action is fast and frantic, and it can be overwhelming until a few matches go by and the player begins to see the cues and tells that communicate what’s happening underneath the explosions, colored patterns and flashes. Duking out was fairly satisfying once I found a few characters that suited my taste and got the hang of things — it’s a lot deeper than it appears on the surface, and the mechanics are smart. Of course, the game’s tutorials only scratch the surface so tracking down some additional info online would be wise…

In a title that sports heavy mecha and anime influence, it should be no surprise that Senko no Ronde 2 is certainly not short on spectacle. Every character has an ultimate move which basically expands their robot in size until it fills up a huge portion of the screen before unleashing various flavors of hell on their opponent. To the game’s credit, having to deal with one of these attacks is not an instant loss — with skill and a little practice, any given onslaught can usually be dodged or countered, and nothing feels better than unleashing a super after an enemy’s has failed to do its job.

While the last boss is unnecessarily cheap (come on, we all saw that coming) and the graphics are nothing to write home about, I was happy to find that there were plenty of nuances to the fighting, and there was clearly much thought given to its design. Senko no Ronde 2 is an oddball title that’s not for everyone and the story mode is a complete waste, but for those who find themselves in the Venn diagram intersection of fighting games, anime, giant robots, and shmups, there’s nothing else on the market like it. Rating: 7 out of 10

Disclosures: This game is developed by G.Rev and published by Degica Games. It is currently available on PS4 and PC. This copy of the game was obtained via publisher and reviewed on the PS4. Approximately 6 hours of play were devoted to the single-player mode, and the game was completed multiple times. No time was spent in multiplayer modes.

Parents: According to the ESRB, this game is rated T and contains Fantasy Violence and Suggestive Themes. Nothing to be worried about here, it seems like pretty standard anime stuff — I don’t recall any strong language or any sexual content. It’s as mild as can be. If your kid can figure out how to play, they’ll be fine with the rest of it.

Deaf & Hard of Hearing Gamers: All dialogue comes subtitled, and there are no audio cues needed for gameplay. It’s fully accessible.

Senko no Ronde was one of those weird games that came out on the X360, priced at 60 dollars that no wanted to touch. Ubisoft released it as ‘Wartech’ and it vanished without a trace. I had a friend who dedicated 3 months towards unlocking every one of the Multiplayer achievements… I introduced a bunch of fighting game fans to the title and they all admitted that there was a depth and breadth to the game that made it commendable. I am a little heart-broken that G.Rev have not seen fit to bring the title to Xbox One, I’d love… Read more »