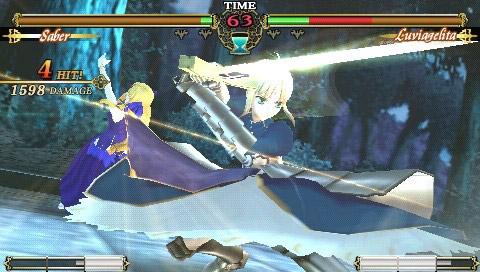 It's that time of year again.

A heartfelt Merry Christmas and/or Happy Holidays to anyone and everyone who takes the time to read my ramblings. I'm looking forward to a new year that will be better than the last, and I hope the same is true for you as well—and again, thanks for coming by.

(…And by the way, is it just me or does it feel completely bizarre to even imagine writing "2010" in any context other than a futuristic science fiction story?)

I've been spending the last few days hopping back and forth between tons of different games, not settling on any one for long. Brace for impact.

In the PSP I have Fate/Unlimited Codes, a download-only fighting game that I know very little about.

Apparently, it's based on an anime or something along those lines, but I've never heard of it before and the game itself makes practically no effort whatsoever to give the player any context.

From what I gather, there's some kind of "war" over a "holy grail" and some people are "masters", while others are "servants". I heard people saying that the story mode was great, but I have to call bullshit on that… it might be great if you already knew everything about the source material, but as someone who came to the game with a clean slate, it's incomprehensible.

Luckily, the actual fighting itself is pretty good. So far I've seen an above-average variety of moves and although some of the characters are a little too generic-looking for my taste, the controls and engine are satisfactory for the PSP. It would never fly on an actual console, but it feels like a good fit here.

Spent a little time with Kahoots, one of the Minis available on PSN. It's fairly simple, but well put-together and has a nice style.

It's vaguely Lemmings-ish, sort of, but saying that is lazy shorthand on my part and doesn't really capture the essence of what it's about. (It's late and it's Christmas Eve, so just take my word that it's one of the best Minis available at the moment.) 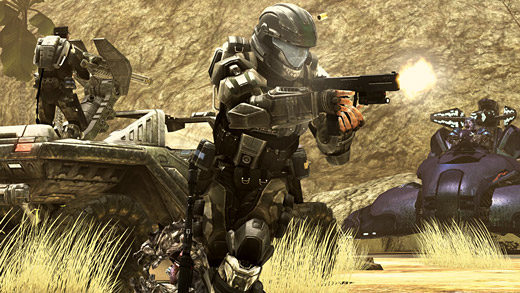 Besides those, I thought I'd give Halo 3: ODST a whirl since GameFly had sent it and it was just sitting here. I am definitely not the world's biggest Halo fan, but I'm always up for trying something new. That said, I spun the disc for a little over an hour before ejecting it and dropping it back in the mail.

I'm not going to review it and I'm not going to spend a lot of time going into detail on it, but I will say that the graphics were terrible, level design left a lot to be desired, and the weapons felt extremely underpowered (even after ratcheting it down to the easiest difficulty.) No thanks.

Moving on from there, I downloaded the new "Big Pack" add-on for Trials HD on the 360. If you've played Trials, then you know what an intense love/hate relationship that is. But, like so many matches made in places other than heaven, there's just something about it that you can't quit even though you know it's not good for you. It's worse than a drug, really. Completing the first release nearly sent me spiraling off into madness, so seeing that there are new "Extreme" difficulty tracks is an irresistible challenge—and also something so frightening that I am compelled to run screaming from the room.

(We're almost to the end here…)

I put Ratchet & Clank Future: A Crack in Time through its paces and walked away extremely dissatisfied. Contemplating doing a review so I won't shoot my load here, but I will say that this is probably my least favorite game in the series, except perhaps for Deadlocked or that absolutely craptastic Secret Agent Clank offshoot. If I wasn't pre-playing it before letting my son have a go, I would've seriously considered just walking away.

Last but not least, since there is a little over a month until Mass Effect 2 (WOOOOO!!!!) I figured I had enough time to slip in one more "big" game. I had a few different things to choose from, but ended up settling on Final Fantasy XII for PS2.

I've heard several different takes on the game from people who have played it, but after three hours my impressions are very positive. It certainly doesn't feel like the usual Final Fantasy, and I like the art style. The graphics are still quite impressive, and look better than some 360/PS3 titles I've seen.

My only concerns at this point are that I have a feeling that I may end up completely screwing myself over by biffing the License Boards (the system that grants abilities and equipment for each character) and that the voice actor for street urchin Vaan is one of the most irritating and unlikable that I've heard in quite some time. Seriously, did no one at Squeenix realize that he comes off as a whiny, petulant punk? Whoever chose this particular voice actor for the game needs to be beat.

I am glad that you are enjoying Final Fantasy XII. It is one of my favorites.

I’ve played Final Fantasy XII for around 30 hours, and honestly, I don’t have a huge desire to finish it. It’s definitely not a bad game, but it doesn’t quite do it for me. I find it odd that I say this, since I could hardly set the game down during the first ten or so hours. I enjoyed the characters and story at the beginning, but as the game went on, the story just seemed to become less important. The large, MMO-style areas and the pacing didn’t really help, and neither did the fact that I spent about eight… Read more »

It just wasn’t a game really made for “us” – it was a spin off title for a place where people are well aware of Fate/Stay. It’s a blockbuster property with a theatrical anime movie, Unlimited Blade Works, due out soon. This is no different than all the Capcom Marvel fighters that were made back in the 90s and early 2000s. All of them assumed we knew who Hulk, Iron Man and Spidey were. It isn’t like the stuff is incredibly obscure here, the anime is commercially available in a cheap collected box set and the manga can be found… Read more »

You did warn me, that’s true. It’s just too bad that the devs didn’t go all the way. A little polish and fleshing-out, and it’s be the total package. it’s still good play-wise, but the story parts are just so… bleagh. could’ve (should’ve) been better.

When you asked my opinion of Fate, I warned you that it doesn’t bother explaining what everything is about – it suffers the “Blue Seed” syndrome, assuming you already knew everything, when they could have easily taken two paragraphs to explain the setting. The jist is that the “Holy Grail War” is a tournament of modern day Magi to gain the power of the Holy Grail, and with it, a wish of their heart’s desire. It’s a team battle, with one mage (called a Master) and a spirit of a legendary hero from across time (called the “Servant”) who also… Read more »

Malkav> Thanks for th einfo. it’s too bad the game doens’t try to tell the story because it seems like it should be cool… i just have no idea WTF is happening. = P

Fate/Unlimited Codes would be based on a visual novel series that started with Fate/stay night and has apparently had at least one (pre/)sequel, Fate/hollow ataraxia. And, yeah. Something about a holy grail war. I think it’s possible they may have made an anime based on it – they often do. But both Fate visual novels I know of have only ever been released in Japan (the first one has a pretty decent fan translation, but your options for actually -playing- it are piracy or import), so only the few and hardcore are likely to know anything meaningful about the story… Read more »

I think I’m having a very different experience than you with Rachet & Clank (review forthcoming), but my least favorite installment so far was probably the first PS3 iteration. That said, I’d really like to see Insomniac try their hand at something else-the R & C series is definitely getting into its “played out” phase. Based on what I’ve seen so far in Crack in Time, they have a better understanding of what made Sonic the Hedgehog good than Sega does, so maybe take a crack at saving the franchise? Granted, it’ll never happen for legal reasons, but a guy… Read more »