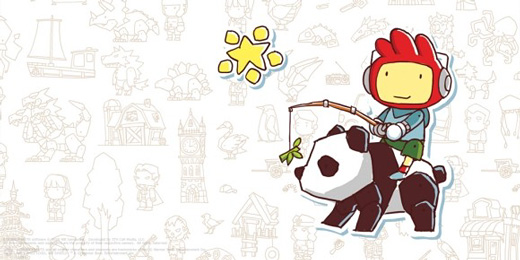 I finally got my hands on Scribblenauts and I have to say, I'm quite divided on it.

On the one hand, it's an absolutely fantastic idea. Write any word and the game will produce that object to be placed at the player's discretion anywhere in the level. I mean, how brilliant is that? Need a flyswatter? Write FLYSWATTER and you've got one. Want to summon the dread god Cthulhu? You can do that too, and he actually shows up. Major brownie points there. The downside to the game is that I think the developers kind of bit off more than they can chew, especially in regard to the level of production that's possible on the DS.

Basically, I think the level of freedom and interaction that most people expected based on the promises of the game before its release were far above what was actually delivered. Many times objects don't function the way they think they would (or should)—summoning Cthulhu is fantastic… until he gets pwned by a wolf? It also becomes obvious in a hurry that there are a few words that can be used to get around the vast majority of puzzles the developers came up with. For example, BLACK HOLE gets rid of a lot of problems, and I'm sure most players will be calling on PEGASUS or JETPACK nearly every level.

Those things are fairly forgivable in relation to how many contingencies the developers would have had to take into account, but the thing that really killed the experience for me was that the physics and interaction of the objects with each other is totally janky, and not at all as solid or predictable as it should be.

In one level, all I had to do was push a simple button, yet no matter what object I produced, I couldn't get the button to stay pushed. It was incredibly frustrating to say the least, and the fact that I passed it thanks to a random happenstance of physics was not at all the way a game like this should be implemented.

In general, the game feels like it barely holds itself together, and too many of the situations feel like hit-or-miss affairs based on whether the physics feel like cooperating or not. Like I said—fantastic concept, but it's definitely not dialed-in.

I finished Professor Layton and the Diabolical Box a few days ago. If you played the first one (Curious Village) then you know exactly what to expect since it's more of the same, but in this particular case that's a very good thing.

In fact, it's actually better since the slightly absurd difficulty of the puzzles has been brought down to non-MENSA levels and this series does a great job of actually integrating the puzzles with the storyline. So many casual games fail to do this elementary step, so it's quite pleasant to see that someone out there actually gets it.

The music is fantastic, the gameplay is satisfying, and it's basically a class act, all-around. Definitely looking forward to the next game in the series.

Last but not least, my 360's still in the shop. Kinda frustrating since we're entering the busiest time of the year for critics, but there's not a lot I can do. In the meantime, I decided to start a brand-new character in Demon's Souls.

For those of you that know me, you know that I replay games so infrequently that you might as well say I never do it, yet I haven't been able to get the game out of my mind. The very fact that I even entertained the notion of going through a 40-hour game again (let alone actually started it) is a testament to the quality of FromSoft's work. Forgive me for sounding like a broken record (scratched CD?) but it gets my Highest Possible Recommendation!

The system specs aren’t all that high, and you can plug in a wired Xbox controller to your USB port and use that if you wish.

If you’re like me, however, you’ll be reaching for the keyboard ever now and then for the form switch hotkeys and some other conveniences. The only knock on the game I could’ve given it was that the controls were a little awkward, and that’s really the only reason it didn’t get a 10 from me.

You should email ’em and suggest it.

I’ve started a new playthrough of Aquaria ti see if I can get all the extras this time. Not sure if I’ll finish, but like you said it’s rare for me to even be replaying a game at all these days.

I think we can all agree, that without the dictionary, this is a not a good game. The controls, the scope of the levels, the problematic physics… Outside of the dictionary novelty, Scribblenaunts has almost no redeeming qualities. So the only real question is, does the dictionary tool alone make the game worthwhile? I dont think so. Its a very dull and shallow game. Built around one big novelty. I can see how this might seem impressive for 5 minutes. But I have no idea how so many reviewers can spend hours with it, and call it great. Where it… Read more »

I personally thought that there was too much hype surrounding Scribblenauts. The concept is cool, but the gameplay videos of Scribblenauts sucked. It looked like sometime that I would pick up and play for a few minute, say “oh neat”, and then never pick up again.