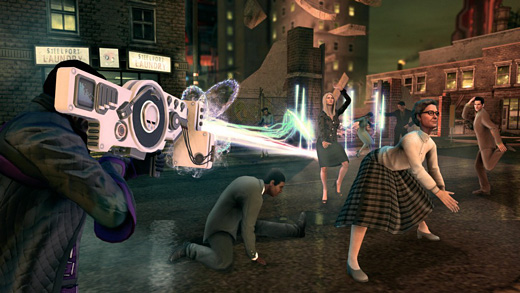 In case you missed it, here's my full review of Saints Row IV and the Second Opinion from my good fellow, @SparkyClarkson.

Personally, I had a blast with it and it more than made up for the nonsensical patchwork that SR3 was. However, I've been hearing some grumbling from others (a good number who came aboard the series with SR3) who didn't find it the same enjoyable experience that I did. Tastes certainly vary, but I think in this case it seems that a person's expectations are somewhat defined by what their first experience with SR was.

As for me, I played all four of the games in sequence and because of that, I think my appreciation for what SRIV brought to the table was certainly increased—I was quite tired of the same old GTA-inspired formula, and I loved that the writers took time to deepen characterization and make connections to the older titles. However, if SR3 had been my first taste, I can understand how the massive change in play style and story that actually gives a damn would seem like a huge left turn away from the previous.

So with that review in the can, what am I playing now?

I had been considering BioShock Infinite since I figured it would be one of those "must-plays" that will inevitably come up during GOTY discussions in a few months, but I never managed to get excited about it before and after watching my wife play for a couple of hours tonight, I decided to scratch it off my list.

Basically, I got my fill of the "Bio" experience with BioShock 1 & 2 (as well as the superb Minerva's Den) and I didn't feel like there was much more to say there. The story elements introduced at the beginning of Infinite didn't grab me, and seeing the wife fall immediately into scrounging for food and money while blasting oncoming waves of enemies was a big turn-off. 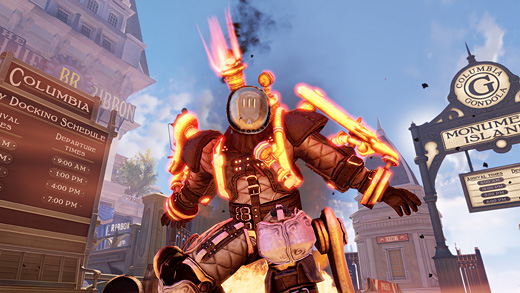 Interestingly, I mentioned my plan to give it a miss on Twitter and I was met with a surprising number of responses who told me not to bother with it, or that I wasn't missing much. Apparently, the tidal wave of love Infinite received earlier in the year has now receded, and it's… not seeming like such a great experience to more and more people?

I ended up deciding on Mars War Logs since the XBLA version recently became available and includes the re-done voiceovers that the PC version received.

I've been a fan of the developer (the unfortunately-named Spiders) ever since I reviewed Faery on XBLA, and I've been eagerly awaiting something else from these folks for a while. After jumping in, I haven't been disappointed with it so far.

What I like most about the work from Spiders is that they take Western-style RPGs and do some really interesting things with them.

In Faery, the player had nearly unlimited flight which could be used to explore a giant-sized world, and a simplified combat system which still managed to entertain. Also, the artwork was quite stylish.

In War Logs, the action is now real-time, and the game is set inside a prison which just happens to be on Mars. Once again, the art team comes through with some attractive visuals and I appreciate the tone—starting a prison-based experience off with a rape attempt in the showers certainly lets you know what sort of content you can expect.

Something common to both Faery and War Logs that I looooove is that the developers don't waste your time. The actions needed to advance the plot are clearly marked (although there are limited sidequests for those who want them) and the territory is small. Although I still call myself an RPG fan, I definitely don't have the time to sink 50, 60 (or more!) hours into something that's expressly designed for extended periods of play. The games from Spiders scratch the same itch and get it done in a tiny fraction of the time—These are RPGs that can easily fit into a busy schedule.

I think I may have forgotten to mention it (heh) but I finished the most recent draft of my book Speaking In Forked Tongues and sent it off to my publisher a week or two ago. It feels pretty awesome to get that off my plate, and fingers crossed that there won't be any more edits requested. Hopefully some more news soon!

As a huge fan of the first BioShock, I can tell you that Infinite was such a disappointment. The story was fine, but every thing else was a step down from the original: maps are more linear, guns can no longer be upgraded with different effects, fewer vigors to use, very limited strategy during battle scenes. As you said, the constant search for food and ammo got on my nerves pretty quickly, and definitely inflated my overall playtime. I had already bought the season pass, so I will play through the last 2 dlcs (which look somewhat intriguing) when they… Read more »

[quote=Matt]As a huge fan of the first BioShock, I can tell you that Infinite was such a disappointment. The story was fine, but every thing else was a step down from the original: maps are more linear, guns can no longer be upgraded with different effects, fewer vigors to use, very limited strategy during battle scenes. As you said, the constant search for food and ammo got on my nerves pretty quickly, and definitely inflated my overall playtime. I had already bought the season pass, so I will play through the last 2 dlcs (which look somewhat intriguing) when they… Read more »