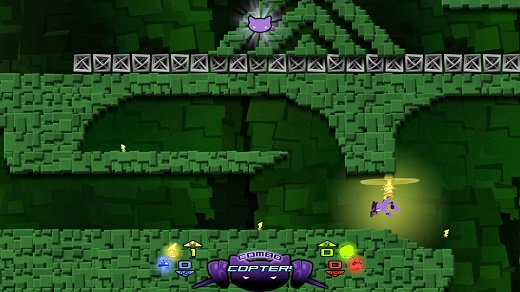 LOW Feels like doing extra steps for no real reason.

It's been said that there's nothing new under the sun, and in the world of game design I think this is largely true. Although I'm not a developer, I can certainly imagine how tough it might be to come up with an idea that no one has done before. On the other hand, I question the value of moving ahead on a project without a good idea behind it. Schrodinger's Cat And The Raiders Of The Lost Quark strikes me as an effort from developers who meant well, but they lack a strong take on well-worn material, and it shows.

In Schrodinger's Cat, the player takes control of the titular feline, and he's tasked with cleaning up some sort of subatomic zoo. The premise didn't make a whole lot of sense to me, and despite the excessive amount of dialogue, the thin story is just an excuse to get a player into the action.

In terms of gameplay, the cat will go through incredibly bland, platform-oriented levels while collecting four colors of particles along the way. While the cat can only jump or punch, he gains extra abilities by combining these particles to produce various effects—mix a certain number and color, and a shield appears to protect the cat from damage. Another combo produces a platform that acts as a stepping stone in midair, another creates a helicopter for vertical lift, there's a missile to shoot, and so forth.

While this mix-and-match might seem like a good idea at first blush, the novelty wore off immediately. More than anything else, this system complicates things that should be simple. There's nothing intrinsically interesting about climbing to a tall place or breaking through a weak barrier, so playing a game where extra steps are needed to perform simple tasks comes off as a lot of work for nothing but the sake of doing it.

Making an already-annoying thing worse, it was difficult to remember which combinations made what, so frequently pausing to look at the combination chart choked the action, and the action isn't great to begin with. This kind of simplistic hop-and-bop has been done too many times to count, and with no hook other than combining particles there's little to keep a player's attention.

Schrodinger's Cat And The Raiders Of The Lost Quark seems like it set out to do overly-familiar things just a bit differently, and that's not enough to cut it. There's nothing particularly broken or wrong here, but without a fresh, new idea driving it, it's got precious little to offer. Rating: 4 out of 10


Disclosures: This game was obtained via publisher and reviewed on the PS4. Approximately 2 hours of play were devoted to the single-player mode, and the game was not completed. There are no multiplayer modes.

Parents: According to the ESRB, this game contains: mild fantasy violence. It's a cartoon cat whapping gooshy aliens. Pretty harmless any way you slice it. No sexual content, no salty language.

Deaf & Hard of Hearing: The dialogue is subtitled and no audio cues are needed for play. Fully accessible.