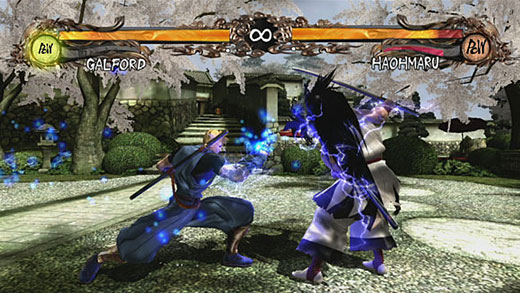 HIGH Unexpectedly cutting my enemy in half, blood cascading to the ground.

LOW The wretched music in the Wild West stage.

WTF The Engrish of "The Crimson Murderousness" and "Handing Sword Princess."

Back in the days when going to an arcade was still popular (and possible,) Samurai Shodown commanded much respect with the peers in my crowd. Of course Street Fighter was the undisputed king, but Samurai Shodown had a niche all its own due to the lethally quick matches and previously-unseen use of weaponry. Samurai Shodown II in particular was a complete quarter-muncher, and I can remember many close matches being won thanks to the long reach of Ukyo Tachibana's shining katana. Good times, indeed. Samurai Shodown Sen? Not so much.

Featuring twenty-four initially selectable characters and a range of modes to choose from, Sen might seem like a worthwhile entry for fighting game fans, particularly those who have history with the series. However, don't be fooled. Out of all the fighters that I've laid hands on in the last few years, Sen is easily the worst.

Graphically, it's quite ugly and crude. Most of the charm and personality present in the old 2D sprites has been sucked out and replaced with awkwardly-modeled characters that just don't look right. The areas where combat takes place are lackluster and forgettable, and even the hand-drawn art is not up to the series' former standards.

Technically, there is not much to praise. The controls don't feel as tuned or as tight as they need to be in a top-tier fighter, and that's got nothing to do with the 360 controller. The situation is compounded by moves that are difficult to perform under optimal cirumstances, let alone in a pinch. To be honest, it's been quite a while since I spent time with a Samurai Shodown game, and I admit I've gotten rusty. However, I'm not that rusty. Even on the easiest setting, certain characters are brick walls of difficulty (damn you, anyone in Stage 5!) and getting parts of my anatomy handed to me repeatedly after just a few seconds wasn't much incentive to get better.

Worse, unlike others in the genre, Sen lacks a competent practice mode. What's available gives no help whatsoever towards learning the characters or their timing, and with inputs this obtuse, the developers should really be bending over backwards to walk players into the action. Between the sadistically cheap AI and lack of in-game assistance, I don't expect that any but the hardest of the hardcore will stick around for more than a few minutes.

Speaking of players sticking around, although the game does offer online versus functionality via Live, I was not able to test it out. Trying three separate times to locate a match—any match —there was never anyone online to play against. No one. Not even one person. To be clear, my attempts at finding opponents weren't done with a pre-release review copy prior to embargo, I was witnessing this player vacuum two weeks after retail release. Any way you look at it, the situation doesn't bode well for the game's future.

Although I still hold a warm place in my heart for Samurai Shodown II and all the good times I had with it, I have no such affection for Samurai Shodown Sen. A miserable, frustrating, and graceless experience, I can't recommend this game to anyone but the most dedicated Samurai Shodown fans—and even those players should be well-warned to stay away. Rating: 3.0 out of 10.

Parents: According to the ESRB, this game contains blood and gore, mild sexual themes, and violence. Although the usual caveats associated with fighting games apply, it must be mentioned that the game includes brutal "fatalities" that depict decapitations, mutilations, and even people being cut completely in half under certain circumstances. I was actually taken a bit aback the first few times I saw them, and I would definitely say that the level of violence in this game is far beyond what's appropriate for children.

Deaf & Hard of Hearing Gamers: You won't have any problems. There are no significant audio cues whatsoever, and the little bit of dialogue in the game is presented through text.