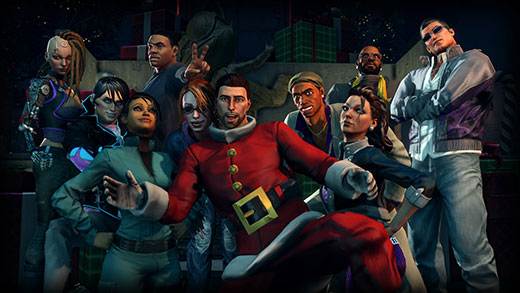 HIGH THe film ‘A Christmas Story' gets much love.

LOW Clawz should have been more developed.

The next piece of DLC continuing the misadventures of the Third Street Saints is now here, and this time they're… saving Christmas?

This add-on mission begins aboard the ship, prior to the end of the main game.  The Saints are in the process of decorating for the holidays, but the Boss (the player's character) is acting like a grinch, and won't be swayed.  Before long, a surprise guest from the future appears and tells the crew that Santa Claus has been trapped inside the matrix, right along with the rest of humanity.  After a little ‘persuasion', the Boss decides to go to Santa's rescue. Of course, things get a little bit crazy in typical Saints fashion.

Honestly though, the gameplay isn't the reason to check out How The Saints Save Christmas

– it's the writing.  There are several genuine laugh-out-loud moments over the course of the mission, and even more for people who are familiar with the Christmas movies that get spoofed, nodded to, and parodied along the way.  While the classic "A Christmas story" gets the most love, the references to various movies and TV specials are pretty thick overall.  This is not a bad thing, and jibes perfectly with the clever irreverence found in the main game.

After Christmas is saved and Santa is freed, a whole pile of extras are unlocked for use in the main game – everything from new Homies and holiday outfits, to my own personal favorite:  a flying, rocket-powered reindeer.  While people pinching every penny might want to hold off since this DLC such a quick play, those in the mood for a little eggnog with the Saints would do well to ring in this holiday Third Street style. Rating: 7 out of 10


Disclosures: This game was obtained via publisher and reviewed on the Xbox 360. Approximately 1 hour of play was devoted to the single-player mode, and the content was completed. No time was spent in multiplayer modes.

Parents: According to the ESRB, this game contains: Blood, Intense Violence, Partial Nudity, Sexual Content, Strong Language and Use of Drugs.  While I sometimes think the ESRB overreacts to certain things, that's not the case here.  This game is absolutely, positively not meant for kids.  There's salty language in every cutscene, tons of shooting and beat-downs, plenty of blood, loads of characters in skimpy clothing (sometimes nothing at all, with blurry pixel boxes over their bits), and the characters smoke drugs out of a broken level at one point.  So…  Not for kids.

Deaf & Hard of Hearing Gamers: all dialogue can be accompanied by subtitles, and all pertinent gameplay information is displayed on-screen with a mini-map that highlights enemies and directional indicators showing where damage is coming from.  I did not notice any significant auditory cues during game play, so I'm calling this one accessible for everyone.