Poppin' A Cap In Satan's Face 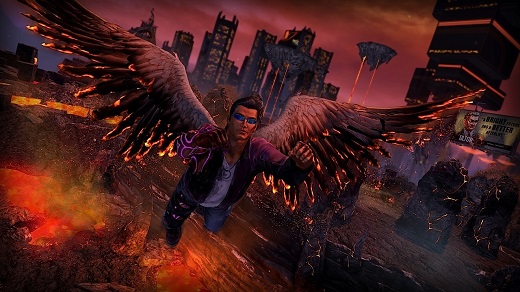 HIGH The musical number is fantastic.

Over the course of the Saints Row series, the Third Street Saints have taken over their town, become adored energy drink magnates, witnessed the destruction of Earth, become superheroes in the Matrix, saved Santa Claus and more… It only stands to reason that shooting Satan in the face wouldn't be much of a leap.

Gat Out Of Hell picks up right after the end of SRIV, and sees the player's character kidnapped by the devil during a birthday party. Naturally, Johnny Gat and Kinsey jump into action, cross the dimensional barrier, and head out to save them.

To clarify exactly what Gat Out Of Hell is, it's a stand-alone expansion that does not require the original Saints Row IV to play. However, fair warning: people starting without a SRIV save will see the default Boss—incredibly disconcerting for me since I always roll with a big, bold lady Boss rather than the generic dudebro that comes stock. Be prepared.

In any event, despite the fact that Gat gets top billing and the cut-scenes feature him as the main character, Kinzie is playable through the entire game. The pair (or both at the same time, in the game's co-op mode) will storm through Hell's open world, a smaller, retooled and slightly twisted version of the city seen in Saints Row IV.

Soon after starting, the player unlocks a number of abilities, the foremost of which is a pair of angel wings which enable flight. After upgrading the wings a few times (quickly done thanks to the nine billion power-up orbs scattered throughout the city) flying is an effective and suitably awesome way to get around. It might seem like a simple thing, but making traversal more interesting than stealing a car or parkour-ing over small boxes is a great thing.

The story bits that pop up during the campaign are great, though they're in short supply. I've always felt that the Row series is at its best when it's focusing on humor, and despite not being the biggest fan of Johnny or Kinsey, they each have some good lines. Best of all was the musical number that comes in the middle of the content. Everyone breaks into song, and it's both fantastic, and fantastically bizarre. 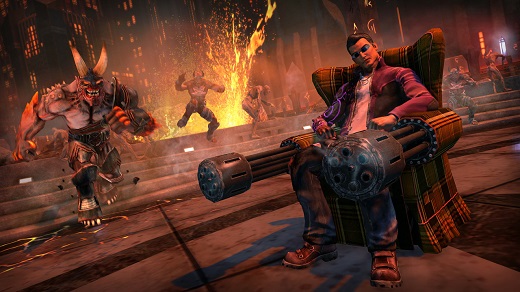 However, players going through the campaign's required missions will find that it takes about four hours, and of that four hours, only about half of it is quality stuff. It's a shame because there's lots of potential for interesting story missions, but they never materialize. One example is that Gat offers a group of notable supporting characters, each with a loyalty quest. However, they have barely any dialogue, their tasks aren't unique, and completing the ‘questlines' does exactly nothing. It feels like there's a huge hole where the funny should be.

Otherwise, there are a ridiculous number of activities and side-jobs to perform, most of which were taken from Saints Row IV. But aside from having slight tweaks to fit the new hellish theme, they're mostly just repeated content—entertaining once or twice (especially if it's been a while since dipping into SRIV) but without more of a narrative reason to go through them, it just feels like a lot of filler. In fact, there's even a cut-scene where Johnny complains to the developers about the content before the end, and they say outright it's because the game would be too short otherwise.

Technically, the content feels rough. I played it on the PS4, and the graphics are nothing to write home about. I also noticed that my triangle button would occasionally stop working for some reason, and worse, my abilities kept resetting themselves back to default at random. For example, I'd try to summon a big "tower" creature for defense, only to find that imps would appear instead. Other times, I'd try to draw my machine gun, only to see Johnny pull out a pair of knives no matter how many times I went into the menu to make sure the right things were equipped. This kind of stuff just shouldn't happen.

On a more meta level, despite the fact that everyone's a demon and there's lava and fire all over the place, I found the Saints version of Hell to be pretty tame. There's almost no T&A (lust is one of the deadly sins, after all!) and nothing's really gruesome or gross. In a series that's known for taking things to the extreme, it's a too-sedate version of what should be an infernal nightmare.

Overall, it was great to spend a little more time with the Saints crew and when the series pops, it really pops. I enjoyed some of the situations and one-liners, that musical number was a true classic, and being able to fly across the city on a pair of wings was fantastic. Unfortunately, without more of the comedy and writing that makes Saints Row great, Gat Out Of Hell is too much busywork and not enough good time. Rating: 6.5 out of 10.


Disclosures: This game was obtained via publisher and reviewed on the PS4. Approximately 5 hours of play were devoted to the single-player mode, and the game was completed. 30 minutes of play were spent in multiplayer mode.

Parents: According to the ESRB, this game contains: blood, intense violence, partial nudity, sexual content, strong language and use of drugs. While those caveats may apply to the main game, this content is pretty tame. Apart from some salty language and a lot of shooting, there's basically no sex and the violence isn't particularly graphic.

Deaf & Hard of Hearing: All dialogue can be accompanied by subtitles, and all pertinent gameplay information is displayed on-screen with a mini-map that highlights enemies and directional indicators showing where damage is coming from. That said, an audio cue follows missiles that shoot the player out of the air. These missiles are on the mini-map and a prompt sometimes comes up (not always) but it's tough to dodge them without sound. A minor issue, though.