Everybody Walk The Dinosaur 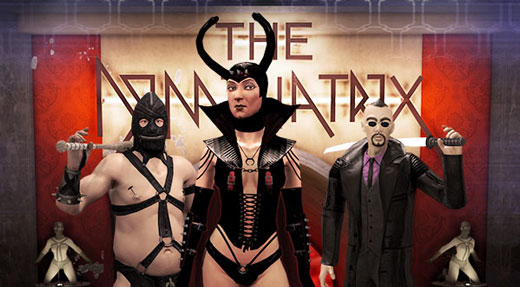 HIGH The ‘deleted scenes’ premise and the stellar ending.

LOW The gameplay in the missions is kinda lame.

While the Saints Row franchise has always been irreverent and over-the-top, those who only see it as crazy are selling the series (and its developers) short.

To be fair, anyone whose first experience was Saints Row: The Third can be excused for thinking that it’s nothing but completely mental. Personally, I’m of the opinion that The Third is the worst of the series because it lost the underlying foundation upon which outrageousness must sit. There must be method to madness. Saints Row 4 was a course correction of heroic proportions, and its first DLC shows that the people behind it are keenly aware of what they’re doing now, and they’re doing it well.

Although the details are a bit hazy, Enter The Dominatrix was originally planned as a DLC for The Third, but was eventually scrapped and overhauled into becoming what we know now as Saints Row 4. In a bit of a mind twist, the developers have now released a new piece of DLC which shows what the old DLC would have been if the developers had never put the brakes on. Trying to explain it is a bit confusing, but actually sitting through it reveals it to be one of the most clever add-ons I’ve ever seen. It may not be especially enjoyable to play, but it is appreciably meta on multiple levels.

The most interesting thing about Dominatrix is that it’s presented to like the sort of bonus feature that would be found on a collector’s edition of a DVD. An interviewer asks the cast of the game about the “deleted scenes” that didn’t make it into what became the final version of 4. The crew is only too happy to express their distaste for the original plan, and their commentary keeps on running even after the cut-scenes end. It’s a treat to hear them disparaging the “filler missions” that players were almost subjected to, and they frequently scoff at how nonsensical the old concept was.

While this add-on earns top marks for creativity in its premise and how it’s presented to the player, actually doing the missions is a bit of a drag. There are only five included, and most of these are simple “kill everything” missions that don’t even rate on the interesting scale. On one hand, it’s neat to see what the developers almost went with because, honestly, it’s kind of terrible. On the other, knowing it’s bad doesn’t make it any better to play. Thankfully, the entire experience only clocks in at about an hour, so there’s no chance of Dominatrix getting old before it stops being amusing.

Gamers looking for a sizable chunk of new content to burn through should probably steer clear since it’s over in the blink of an eye, but fans of the Saints experience can look forward to something that’s totally bizarre, yet still completely in line with the smart new slant of the series. Also, there are dinosaurs. Rating: 7 out of 10


Disclosures: This game was obtained via publisher and reviewed on the Xbox 360. Approximately 1 hour of play was devoted to the content, and it was completed.

Parents: According to the ESRB, this game contains: blood, intense violence, partial nudity, sexual content, strong language and use of drugs. While I sometimes think the ESRB overreacts to certain things, that’s not the case here. This game is absolutely, positively not meant for kids. There’s salty language in every cutscene, tons of shooting and beat-downs, plenty of blood, loads of characters in skimpy clothing (sometimes nothing at all, with blurry pixel boxes over their bits), and the characters smoke drugs out of a broken level at one point. So… Not for kids.

Deaf & Hard of Hearing: all dialogue can be accompanied by subtitles, and all pertinent gameplay information is displayed on-screen with a mini-map that highlights enemies and directional indicators showing where damage is coming from. I did not notice any significant auditory cues during game play, so I’m calling this one accessible for everyone.