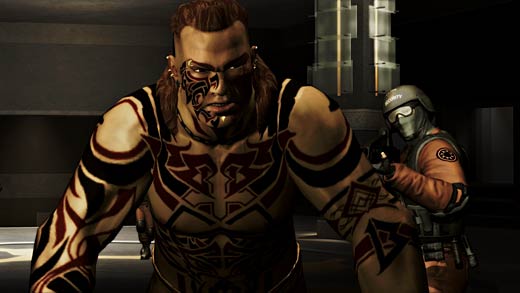 HIGH Jumping out of a plane to discover that there's a minigame associated with the landing.

LOW Finishing a stressful mission only to have my 360 lock up before I had a chance to save.

WTF Not being able to adjust the bust and hip size of female characters.

In a disappointing case of "the same thing we did before, plus one" development, Saints Row 2 has arrived, although I'm not quite sure why it's here. The game's technical side is even buggier and more erratic than the first, the story and characters are flatter, and outside of a few small bits, there's not a lot to differentiate the current game from its predecessor.

For those who missed it, the original Saints Row was an open-world game chronicling the rise of a gang called the Third Street Saints and their attempts to take over the city of Stilwater. The game cribbed most of its identity from Grand Theft Auto: San Andreas; spending time driving like a maniac and causing urban mayhem with the Saints felt like going home again—and doubly so in comparison to the misguided, morose direction taken by Rockstar's GTA IV. However, as much as I enjoyed my first go-round with the Saints (and I really, really did) I have to say that getting jumped-in again wasn't nearly as great the second time around.

Before anything else, I do want to say that Saints Row 2 does deliver what is probably the most balls-out open-world experience to be had this season. For players who like to roam an environment and see what it's got to offer, Stilwater is a very rich place to be set loose. Volition has included the widest array of peripheral, optional, and hidden activities I've seen in a game of this sort, and the types of story-related tasks are quite diverse. Although shooting enemies is a core part of just about every mission, I appreciated that it could be done from air and sea, as well as on foot, in a car, on a scooter, or just about anywhere else. Fans of the open-world genre and those who missed the first game won't be disappointed with the width or breadth available in Saints Row 2.

…Now with that said, there are a number of things to address.

First and foremost, the plain truth is that there is very little to differentiate this entry from the last. The graphics aren't appreciably better, the mission structure is identical, and the feeling that I had done this exact thing before permeated the entire experience. Quite honestly, I don't feel as though anything significant has been added to the formula. The new character creation options are nice and the addition of easily-accessible helicopters and extra side events are in the plus column, but they're minor value-adds that don't significantly improve the title. In fact, I think it could be said that Saints Row 2 actually loses ground in some regards. 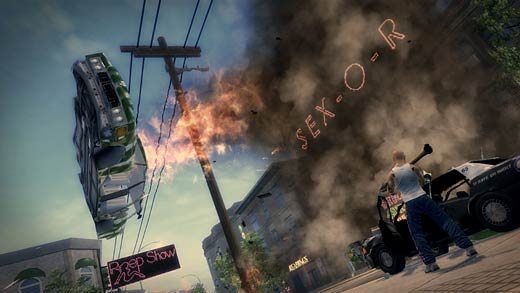 For example, I ran into bugs and glitches just a few moments after starting the first mission, and I kept on seeing them until credits rolled. Just off the top of my head: characters often clip through architecture and objects, I was sometimes unable to switch between weapons when needed, I fell through the sidewalk and under Stilwater several times, I was inexplicably ejected from a truck and suspended upside down to float on my head, I killed a character by breaking his neck despite the fact that my arms were empty and his body was three feet away, and for some reason, the gang members who accompanied me on my exploits would often be stuck behind walls, corners, or doors when there was a clear path right next to them. I could go on, but the point is that there's still a lot of housekeeping to be done here.

Though those things were irritating, even worse was the fact that the game completely locked up on several occasions, totally freezing my 360 and involuntarily bringing my play sessions to several unwelcome halts. Although the first Saints Row had a few well-known programming quirks, they were fairly inconsequential and easy to forgive. This time around, the level of technical production has actually nosedived, just the opposite of what I would expect in a sequel.

Besides the lackluster technical side, the creative side is in need of some work too. Although many outrageous things happen, the tone and scripting aren't as light and farcical as they were in the original, taking itself a little too seriously this time around. In fact, there seems to be something of a mean streak on display, especially in regard to the main character. Straddling an awkward middle ground, the story isn't a full-on parody of gang tropes, but it's not quite earnest enough to make some of its sadism palatable by being straight drama. By attempting to play both sides, it satisfies neither.

Saints Row 2 certainly fulfills all the requirements that a good open-world game needs to succeed, but I wouldn't say that it thrives. With so much time passing since the first game was released, I expected a much higher level of technical polish and more significant forward movement. As it stands, there's not much to recommend it when a nearly-identical (and in some ways, better) experience can be had by picking up a copy of the first game instead. With the intense competition this holiday season from so many blistering top-shelf efforts, a minor iteration on a formula that needed a little work in the first place doesn't quite cut it. Rating: 7 out of 10. 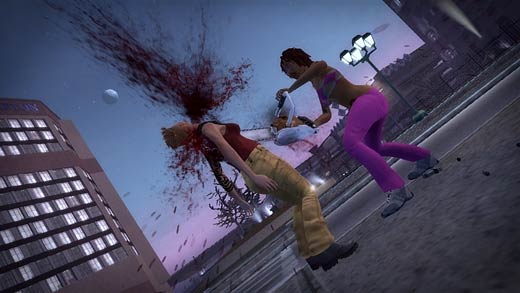 Disclosures: This game was obtained via retail store and reviewed on the Xbox 360. Approximately 22 hours of play were devoted to the single-player mode (completed 1 time). No time was spent in multiplayer modes.

Parents: According to the ESRB, this game contains blood and gore, intense violence, sexual content, strong language, and use of drugs. I don't say this too often, but please take me seriously when I say that this game is highly inappropriate for children. The action can be brutal and quite violent at times, there are tons of references and other sexual content, and there's a vast amount of salty language. It's nothing that I object to as a discerning adult, but I absolutely would not want my son playing this game and I'm sure that most concerned parents would feel the same.

Deaf & Hard of Hearing Gamers: You should be aware that it can be sometimes quite difficult to gauge how much danger the player is in without being able to hear gunshots and enemy sounds. There is an on-screen display for incoming fire, but I didn't find it to be nearly as effective as simply listening to what was going on in the environment. Be prepared to die a little more often during heated shootouts, but the good news is that all dialogue can be accompanied by text and the game is accessible in all other aspects.

[quote=Brad Gallaway]thanks for your comment… Anyway, if you played the first SR, I’d be curious to hear your opinion on how the two games compare?[/quote] Yes I did play the first SR. I also had a great time with it. Comparing the two will be difficult for me as I haven’t played the original in many moons. They are similar in many ways and I understand that this caused the game to lose points in various reviews. What really sets SR2 apart is the deep customization options, especially character. Being able to create a female lead was new to the… Read more »

So if you don’t read biographies, then I guess you should just stop reading books. And hey, if you don’t watch reality tv, then just toss your set out. Don’t like sedans? Sell your car and invest in a really good pair of walking shoes. Hell, why quit there? If you’re not a fish fan, then just stop eating altogether.

Makes perfect sense to me.

Maybe you shouldnt be reviewing modern day games if you are not into multi and coop. Wake up ffs… You cant ignore multiplayer in any game anymore… Maybe you should just start reviewing retro games..

thanks for your comment. I’ve never been one for multi, so that never really factors into my reviews. (I don’t give points for it, but I don’t take points away, either.) Anyway, if you played the first SR, I’d be curious to hear your opinion on how the two games compare? i *LOVED* SR1… had a total blast with it. SR2 was just too close to what SR1 was for me, especially since I don’t do multi, and that in addition to all the bugs is really what held it back. (and i agree that GTA4 is boring as hell,… Read more »

I completely disagree with this review. SR2 is by far the most fun I’ve had with a sandbox game in years.(GTA Bore included) The fact that you didn’t play multi. or Co-op and STILL said “I don’t feel as though anything significant has been added to the formula.” WOW. Co-op is significant in a game of this type, something the “innovative” GTA4 didn’t do. It’s implemented well and most importantly it’s fun. In respect to all the bugs and glitches, most have been fixed with the latest patch. I’m not really sure what you expected from this game, but for… Read more »

I believe the phrase is “much zanier”.

This review is ass, the game is much more zanier and over the top than the first game. If you don’t like the game, then go play that piece of shit GTAIV. Saint Row 2 is a fun sandbox experiance. Zero Punctuation review was much better than this.