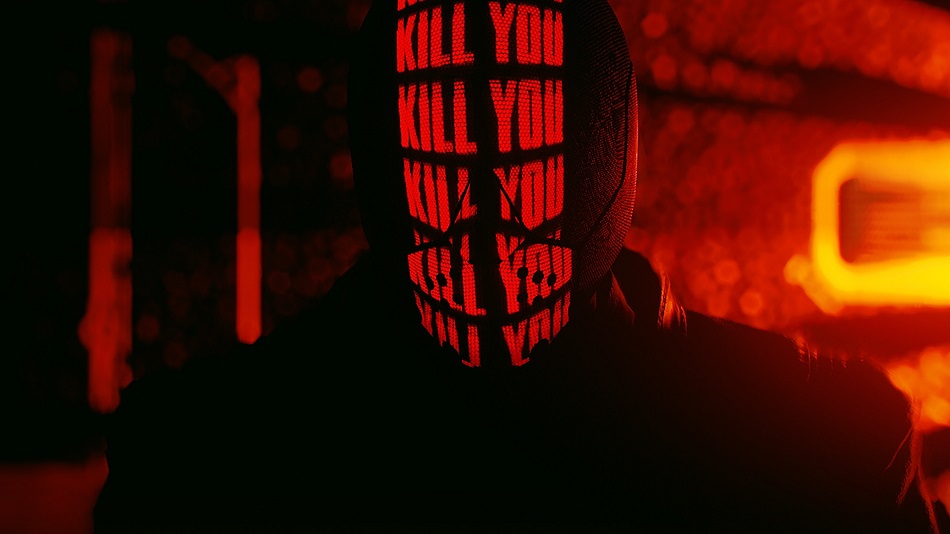 HIGH The aesthetics and style are on point.

LOW It runs out of interesting content halfway through the campaign.

WTF Explosive barrels fly towards me when shot??

In my book, style counts for a lot. It can smooth over rough patches in design, it can elevate material that might not be otherwise notable, and it can make a project stand out in a market flooded with competition. Style is important. However, style alone isn’t enough to make a game great, and despite all its flash, Ruiner doesn’t measure up.

This isometric twin-stick shooter (with melee in equal measure) puts the player in the role of a man who’s locked into a mask that flashes slogans and pictures across its LED surface. His brain has been hacked, and he’s been commanded to kill “the boss”. Before the deed is done, he’s hacked again and redirected by a mysterious woman known only as Her.

So, about that style. Ruiner has it in spades. The enigmatic main character is eye-catching thanks to his electronic billboard of a face, and the entire game is drenched in oversaturated red hues and techno-nihilism. Every character is some sort of decrepit cyborg that can’t afford upgrades, and some people gain employment (or are they prisoners?) by becoming flesh-puppets for the virtual entertainment of those who jack into them. What’s presented here is the worst possible sort of future by way of Gibson and Scott, and it works wonders for tone-setting.

Ruiner’s gameplay starts with a strong first impression. The top-down combat is as fast and brutal as one might expect in a post-Hotline Miami world, and can even be a little overwhelming at first. Coming to grips with four shoulder buttons that need to quickly managed while also keeping an eye on bad guys entering the battlefield and constantly repositioning via lightning-fast dashes is all made tougher by the significant amount of visual noise happening onscreen. Expect to die quite a bit.

However, after a few sections of toughing it out and earning points to put into the abilities, things stabilize. New powers also help tilt things in the player’s favor like life regain, supply drones, charge attacks and more, and there’s no penalty for experimentation. Players can add or remove points from any ability at any time, and it was a smart decision to avoid locking players into upgrade paths and making them grind for more resources in case a choice didn’t pan out. 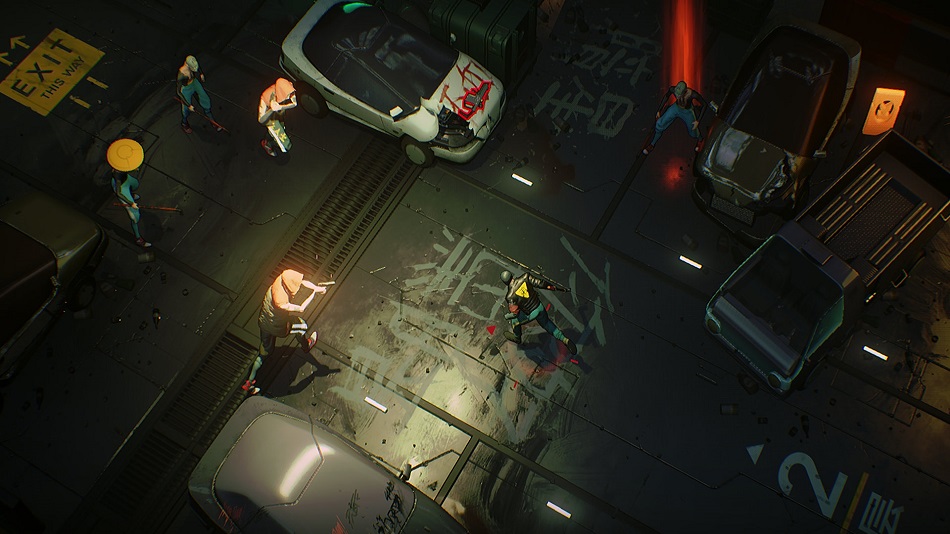 For me, Ruiner remained largely about abilities that the character has from the very beginning — a dash and a small shield which protects him from the front. While neither of these are required to use, it was incredibly effective to upgrade both and stun people I crashed into before slicing or bludgeoning them. However, after a short session of beating up thugs, it became clear that Ruiner doesn’t have a lot of meat on its bones. Players will see nearly everything it has to offer before it reaches the halfway point, and then it’s just a matter of repeating sequences over and over until the end.

The levels are all bland industrial hallways that look alike with nearly no interactivity, and it’s easy to get lost or walk in circles because there’s no map.  Ruiner does give a pointer as to which general direction to head in, but it’s not always immediately apparent how to get there. With so few landmarks or notable features, the game might as well have been a linear series of encounters.

While heading towards the next objective, players will enter a room, get swarmed by a number of enemies, dispatch them all, collect EXP, and then do it again. And again. And again. It’s fine for a while as the systems are being learned, but it doesn’t evolve or go anywhere with its formula. Worse, boss encounters are repeated and the number of enemy types are limited. There aren’t any twists or turns, and it doesn’t get more interesting as time goes on.

It’s also worth noting that there were a few issues that cropped up for me. For example, I found melee far more effective than firearms. The handling of guns felt too loose, and considering how fast the action moves, it was often difficult to hit targets.  Ruiner also includes an ability to chain dashes together by holding a button and slowing time down, but like the guns, it was too loose and tough to use in tight situations. With a little tweaking, it might have given the proceedings a bit more strategic value.

There are some non-combat elements in Ruiner that seem to hint at depth, but they don’t deliver on the potential. Between levels, the character can roam a small township, take in some sights and talk to a few characters. Sadly, the dialogue choices that pop up don’t seem to matter and there are no notable activities or events to be found in town. It’s like the ideas were there and a cursory attempt was made, but there isn’t any content to dig into.

This feeling of style over substance largely describes Ruiner in total — the aesthetics are on point, but style alone can’t carry a game. It’s a shame that it fizzles out so soon after starting, but I’m left with the sense that this studio will be turning out great things in the future… they’re just not quite there yet. If their next project manages to bring gameplay as rich as their visuals, it’ll be a real crackerjack. Rating: 6 out of 10

Disclosures: This game is developed by Reikon Games and published by Devolver Digital. It is currently available on PS4, XBO and PC. This copy of the game was obtained via publisher and reviewed on the PS4. Approximately 6 hours of play were devoted to the single-player mode, and the game was completed. There are no multiplayer modes.

Parents: According to the ESRB, this game is rated M and contains Violence, Blood, and Strong Language. It’s a visually overwhelming display of harsh colors, flashing lights and bloody violence. It’s absolutely on-point for the style it’s going for, but this style is not for kids… it feels a bit soul-staining. Keep the little ones away.

Deaf & Hard of Hearing Gamers: All dialogue is subtitled and there are no auditory cues needed for gameplay. It’s fully accessible.