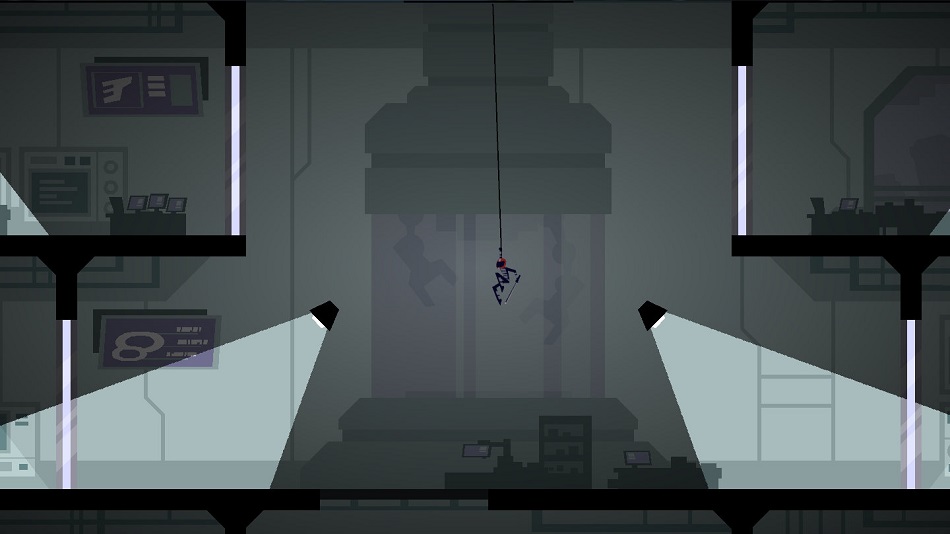 HIGH Killing a guard by recalling my sword in mid-air.

LOW Failing to see a ceiling I could grapple for way, way too long.

WTF No checkpoints in the final level?

I picked up Ronin for a song during the last PSN sale.  I’d had my eye on it for a while but wasn’t sure it would be my thing, so I was waiting for a low-risk opportunity to give it a shot. Once I did, it took about four minutes for me to realize it was fantastic. After spreading the word on Twitter, I had dozens of people ask me if it was like Gunpoint. I’ve heard of Gunpoint but never played it, so I couldn’t answer that question. But what I can say is that I wish I’d played Ronin sooner.

This tiny indie by Tomasz Waclawek shares only the merest scrap of a revenge tale to get things rolling, but it’s ultimately of no consequence – no, the real reason to play Ronin is for its fascinating blend of 2D platform action and turn-based combat.

Each level is a series of buildings and rooms populated with different types of guards – some are generic thugs, some have machine guns, and occasionally the player will come up against what appear to be cybernetically-enhanced samurai. Where most games with graphics and design like this would be content to deliver fast, reflex-based fighting, Ronin goes in the opposite direction – When bloodshed begins, everything freezes and combat plays out in turn-based fashion.

Ronin’s protagonist has a variety of unlockable techniques but their primary ability is superhuman jumping and sticking to walls. In nearly every scenario, the most important thing the player can do is to look for the best place to leap to in order to avoid incoming bullets and prepare their next strike.

With their heightened mobility, the player can be nearly anywhere in the environment, and all enemies have visible markers which show where they’re about to fire. The game then becomes chess-like in nature — as the player scans for momentary safe zones on the floor, walls or ceiling, enemies sweep the room and don’t spare bullets. When played well, guards will constantly be shooting one step behind the player as they dash from one guard to the next, leaving no one breathing.

This gameplay is already fantastically entertaining in and of itself, but after unlocking the special abilities, even more incredible sequences are possible – teleporting across a room to slice a far-away guard, throwing a sword to impale someone down below, leaping across a gap to knock out another, and then recalling the sword to stab someone on its return arc (and more!) can all be done. 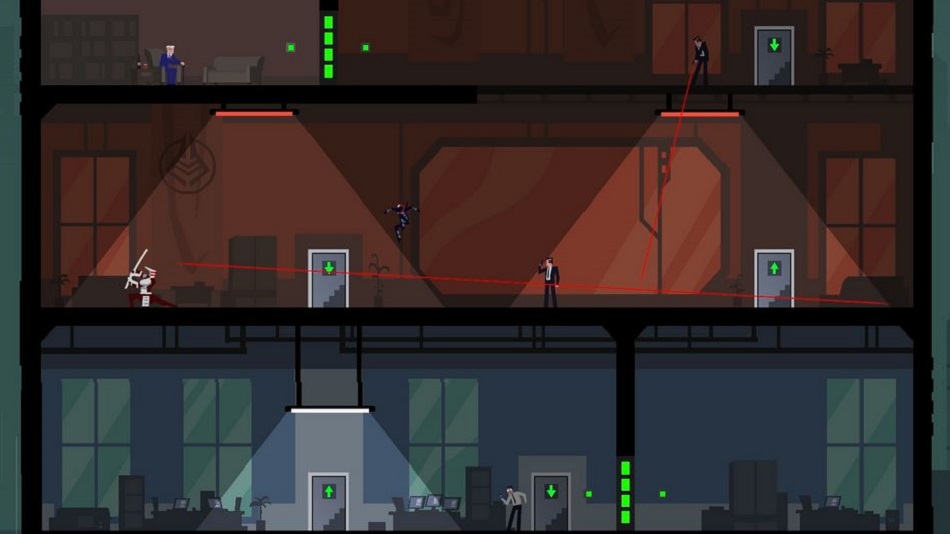 While some rooms in Ronin can be quite challenging and may require multiple attempts in order to find a string of leaps and attacks that can get the job done, the checkpoints are quite generous – one pops nearly every time a room is cleared and there’s a moment of quiet. Since the protagonist dies with only one hit, the game would be intensely frustrating if the player had to repeat long stretches of assassination, so breaking it up into small chunks was a wise move.

I enjoyed nearly every minute of my time with Ronin, and I see it as an elegant masterclass in design and production — if there are any criticisms to be made, they’re extremely minor.

One potential issue is that the game leaves it to players to discover certain truths or traits that might not be immediately understood, and overlooking or misreading them can lead to some sections being much harder than they really are.

For example, ending a leap mid-air and waiting for the next turn is a great way to kill an enemy below while also dodging bullets — a clutch technique that I didn’t suss until nearly the end of the campaign. Similarly, some civilians react to sound, and can be kited out of harm’s way once this is revealed. However, it’s not something the game outright explains, instead relying on the player’s powers of observation to put two and two together.

I’m fine with chalking things like that up to my own assumptions and errors, so my only real complaint against Ronin is that the game is absolutely consistent in applying its rules during the campaign until the final level. At this point, the script gets flipped and the checkpoints that make it so eminently playable are removed – although it was done to ratchet up the dramatic tension, it was ill-advised choice that made finishing an already-challenging game incredibly tough.

As someone who enjoys both action and strategy titles, Ronin strikes a perfect balance between the two styles. The implementation, cleverness, design and restraint are basically perfect, and I enjoyed nearly every minute from start to finish – I wouldn’t hesitate for even a heartbeat before recommending it to anyone who likes a little thinking mixed in with their swordplay.

Now, I suppose I should probably check out Gunpoint… Rating: 9 out of 10

Disclosures: This game is developed by Tomasz Waclawek and published by Devolver Digital. It is currently available on PS4 and PC. This copy of the game was obtained via paid download and reviewed on the PS4. Approximately 8 hours of play were devoted to the single-player mode, and the game was completed. There are no multiplayer modes.

Parents: According to the ESRB, this game is rated M and contains Violence, Blood, Sexual Content, Partial Nudity, and Strong Language. While the graphics are simple and not very explicit, blood is spilled and humans are clearly getting killed. I am not aware of any sexual content or any strong language – no idea what those disclaimers are referring to. It feels like a stretch to all this an M, I’d rate it closer to a T.

Deaf & Hard of Hearing Gamers: All dialogue is subtitled and there are no significant auditory cues. It is fully accessible.

Awesome Art Style. Will buy also, purely based on a Gallaway 9 score. (and Art style;-)

Aww, no Robert De Niro or car chases? Still, you make it sound good fun (apart from the final level).