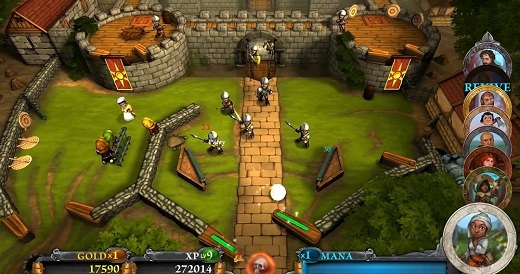 HIGH It's a great concept ripe for hybridization.

WTF Am I really supposed to read text this small?

I'm not really much of a traditional pinball fan, but I do enjoy the kind of pinball that's only possible in video games—titles with crazy, physics-defying boards, weird special features, and animated characters hopping across the playfield. That kind of stuff is great, and that little bit of fantasy is what sells me. As such, I'm a big fan of the "pinball plus" genre, if that's even a thing. (It is now.) Alien Crush, Devil's Crush, Metroid Prime Pinball, Mario Pinball Land, and a lot of what Zen Pinball has been doing lately, for example. When I heard about Rollers of the Realm, it seemed tailor-made for me, and the first hour or so was fantastic.

Then, I kept playing…

Rollers of the Realm takes traditional pinball and marries it to a full-on fantasy RPG setting. The player's balls are actually characters in spherical form, each with their own attack strength, special abilities, and characteristics. For example, the Hunter can activate a special ‘hawk pet' which acts as a multi-ball that shoots in from the side of the playfield. The barmaid is able to throw pots and pans as projectile weapons while she's careening around the board. The healer can revive lost balls, and so on. The player is free to use any of the available characters as they see fit (some must be unlocked) and it's great to have special abilities to spice things up.

Following this concept, each pinball board is one area that would normally be found in fantasy RPG. There's a village, crypts, a forest, an enemy castle, and more. Each area has a slightly different goal such as "collect 500 gold and then escape" or "free the prisoner from the dungeon", not to mention the various features that can activate—some have multiple levels, some have little tunnels or passageways, and in general, there's something interesting about each area.

On the surface, what I've described so far sounds like pure win to someone like me, but the thrill started to dissipate once I found that production of the boards wasn't quite as good as the concept it's built on.

The first two sections of the campaign were just fine and things were going swimmingly, although I did notice a few weird physics glitches—pretty much the one thing that absolutely shouldn't be in a pinball game. A few times I saw my ball pass directly through the flipper, other times my ball got hopelessly trapped behind some geometry. There were other little things too, like the ball not quite bouncing the way it seems like it should. None of it was major, especially considering the fact that when the gutter is lit green, the player can lose as many balls as they want with no penalty. However, when the gutter turns red in the presence of enemies, lost balls are gone. If the player runs out, it's game over.

This green/red system seems like a good way to balance exploration with combat when enemies are on the field, but the level design just doesn't hold up. The space between the flippers is quite large, and there were too many times when my ball sailed straight through without any chance of hitting one. In another level, bumpers on the side of the field break away after the ball touches them a few times, and then there are three gutters to contend with in a very small area. However, the real killer for me was that enemies on the field can strike the ball and make it go shooting towards the gutter, and in certain levels it happens so fast that there's practically no time to react. I lost patience for Rollers when I replayed the same enemy-heavy board 20 or 25 times and just couldn't make any progress.

I absolutely love the premise of Rollers of the Realm and I think there's a lot to like about it… The art is cute, the RPG elements are well done, I love the ball variety, and taking these characters through this ‘world' of pinball boards holds much appeal for me. On the other hand, it's a pinball game at its core, and if the pinball isn't nailed down, then the entire experience suffers. With some redesign of the boards and a bit of physics polish, this would be an easy recommend. As it is, it doesn't feel quite ready for prime time. Rating: 4 out of 10.


Disclosures: This game was obtained via publisher and reviewed on the Vita. Approximately 3.5 hours of play were devoted to the single-player mode, and the game was not completed. There are no multiplayer modes.

Parents: According to the ESRB, this game contains: fantasy violence, use of alcohol. It's pinball with a wee bit of balls bumping into cartoony knights, rats, or other various fantasy-themed enemies. Pretty harmless stuff. I think the barmaid mentions grog or somesuch once or twice, in reference to the Alcohol warning—it's nothing heavier than that.

Deaf & Hard of Hearing: No problems here, it's fully accessible and does not rely on audio cues to advance.

I haven’t really been interested in pinball for a while, but this definitely seems like a creative spin on the concept. Pity that it wasn’t polished enough to deliver. Hopefully they’ll patch the problems soon and work on ironing out the kinks if they make a future title.