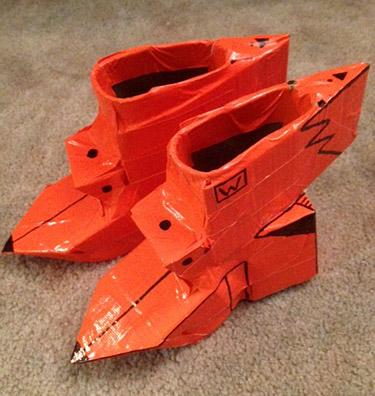 Both of my kids are really into costumes and such, and today my youngest asked me for some rocket boots. I didn't have anything immediately on hand besides an old pair of galoshes that were not being used, so the wife picked up a few bits, and this is what I put together.

Definitely some influences from Sonic/Metroid there. Still, not too bad for a first effort, I think. Now, hopefully he won't ask me why they don't actually fly…

I just recently completed Persona 4: Arena and the review went up recently. Click on over and take a look if you are so inclined.

(While you're at it, @Aeazel's review of Endless Space is up, as well as a review from Tera Kirk for PSN's Time Machine: Rogue Pilot.)

After that, I did a quick evaluation of the "New Character" DLC for Street Fighter X Tekken. The review is in the can, so look for that to go up soon. In general, I really liked it… Blanka is a badass and Jack-X is a lot of fun to play. Elena is also an interesting character to use, as well. Although the price is steep at $20, this stuff is a great addition to an already-great game.

On the other hand, it's hard for me to look past the fact that fourteen extra characters were already on the disc that I bought. Regardless of how people try to spin it, I'm just not okay with paywalled ransomware, and it makes me feel a little dirty. It's a little too late at night (at the time I'm writing this) to get into that whole discussion again, but it just doesn't sit right.

At the moment, I'm going through Thomas Was Alone, a small indie effort on PC about a little line of code that becomes self-aware and begins navigating its way through its environment.

It's utterly charming and I love the ultra-clean, elegant visuals. I'm not done with it yet, but what I've seen so far has been quite pleasant.

One of my most-wanted this year is Dishonored… although I haven't laid hands on it yet, it seems to me to represent a great combination of BioShock and Hitman, with a lot of little random bits thrown in for good measure.

Although buzz is building for this title, I have to admit that I'm quite surprised more people haven't been talking about it. Bethesda just released a brand-new video about some of the creative ways to kill people. Check it out, and I'm pretty sure that it will be on your most-wanted list, too.

In smaller-game news, the newest Indie Game Uprising will be taking place soon on XBLI, and the good people behind it have released atrailer of their own. If you haven't seen what's been happening on Microsoft's Indie Channel lately, make sure you take a look… most of the titles selected for this trailer look quite intriguing to me. Well, except one. One looks pretty lame. But the rest? Sign me up!

That's it for now. I'm running a pretty severe sleep deficit and need to get myself under some covers, but check out the news section down below… lots of good bits this time around.