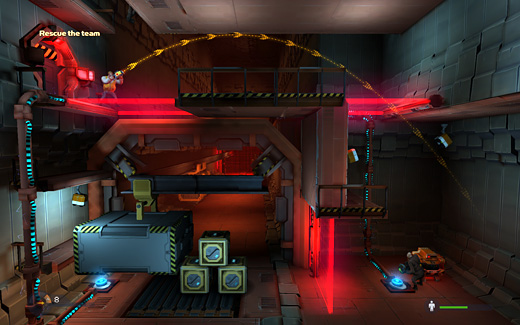 LOW What's up with the evil guardsmen sounding so effeminate?

WTF "Git'er done" is still in use a thousand years into the future?!?

Sony may be expert at certain things, but I don't think anyone would argue that effective public relations is one of them. Case in point? I'm a critic who pays close attention to game releases and reads up on just about every new title that comes down the pike, yet Rochard

very nearly slipped under my radar. I'm glad that it didn't, because it's been one of the most enjoyable download games I've played all year. With a title like this on PSN, anyone with half a brain in Sony's marketing department should be promoting it every chance they get… but they're not. Here's my small attempt to rectify that.

Rochard is a 2D platformer rendered in 3D and employing a robust physics engine. The title of the game comes from the main character, John Rochard, a deep-space miner with a southern accent and the colloquialisms to match. After a series of fruitless excavations, Rochard and company stumble upon some ancient ruins at the core of an asteroid. Once word of their discovery gets out, bad things start happening and it's up to our hero to save the day.

Setting story aside for the moment, Rochard's play is based on a special multipurpose tool called a G-Lifter—and wow, this thing does it all. For much of the game, players will use it to lift heavy objects such as large boxes and shipping crates. These items can be stacked to reach higher elevations, they can be held aloft to act as a shield from enemy gunfire, or they can be thrown as lethal projectiles. Later upgrades add gunfire, grenade-launching, enhanced lifting, low-gravity manipulation and grappling hook functionality, among other things.

While I usually avoid going into laundry-list detail when discussing a game's features, I think it's important to highlight the versatility of the G-Lifter since it's so integral to the entire Rochard experience. From start to finish, nearly every section of the game is one sort of puzzle or another, and I was quite impressed with the variety, quality, cleverness and implementation of the challenges. 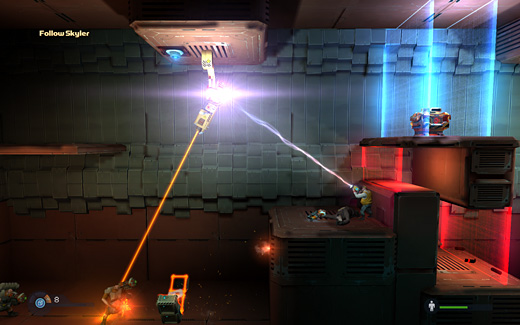 I've seen several games that try to integrate weight and inertia into their puzzles, things like stacking blocks to activate a switch, or throwing objects and having them "realistically" ricochet in order to hit something. The end result is usually that the physics are unpredictable and squirrelly, and often make things harder than they need to be. However, the developers have things absolutely locked down in Rochard, and because of this, getting through each puzzle relies solely on the player, not on hoping that objects will respond the way they ought to. Tilting an exhaust fan, chucking a grenade into it, and then turning on low gravity to extend its flight towards an otherwise unreachable target would be a horrendous recipe for frustration if the physics weren't absolutely spot-on, but they are.

Apart from the top-quality physics, the rest of the game's design is superb. It's clear to me that the developers wanted to make Rochard friendly and approachable, and they've succeeded. Thanks to the 2D nature of the levels, camera views are clear and functional. Checkpoints are plentiful, and grenade-refill stations are placed near rooms where explosions are needed to progress. Rochard's life refills if he can escape enemy fire for a few moments, his gun never runs out of ammo, and there's no limit on use of the G-Lifter.

Furthermore, the game clearly teaches every new mechanic as it's introduced, and new twists are added at regular intervals throughout the course of the adventure. Taking all this into account, it's a master-class in the proper way to produce a game with the correct focus and a sharp eye on the player's experience. At no point was I ever confused or unclear about the tools the game was providing me with; flinging boxes, swinging from grapple points, leaping with mid-air rebound jumps and sticking grenades to targets for delayed detonation all felt like second nature.

Although I skipped over the story at the beginning of this review, I do think it's worth mentioning that the game makes plenty of effort to illustrate the characters. While traditional cut-scenes are rare, there is a good amount of dialogue that happens between Rochard and others happening in a natural, organic way as the player traverses the levels. The banter doesn't get in the way of the gameplay and there's just enough to get a sense of who's who, without any distracting detours into needlessly-talkytown. I was also quite impressed with the game's leisurely opening scene—it was simple and understated, yet gave a perfect snapshot of the characters and their world. Quite elegant.

It's really a shame that Rochard

hasn't been advertised or promoted anywhere near as much as it deserves, but don't let Sony's oversight stop you… players seeking a fat-free experience with rock-solid fundamentals, polished production levels and cleverly engaging gameplay can hardly do better than this. Rating: 8.5 out of 10.


Disclosures: This game was obtained via publisher and reviewed on the PS3. Approximately 5 hours of play were devoted to the single-player mode, and the game was completed. There are no multiplayer modes.

Parents: According to the ESRB, this game contains mild language, suggestive themes, and fantasy violence. Although the dialogue in the game is slanted towards adults, it's hardly anything to be concerned about. Rochard's a straight-talking guy, and his speech reflects that. The violence consists of shooting bad guys with a laser gun, blowing them up with grenades, or hitting them with boxes. None of it is bloody or gory. The suggestive themes? I have to assume it's because of some neon girl-shapes in the dance club area… All in all, not much to be concerned about here. I'd let my young son play it for sure.

Deaf & Hard of Hearing: There shouldn't be much of a problem. All dialogue is subtitled, and it's rare that enemies announce their presence through audio cues. Playing with the sound off presented me with no added difficulty.