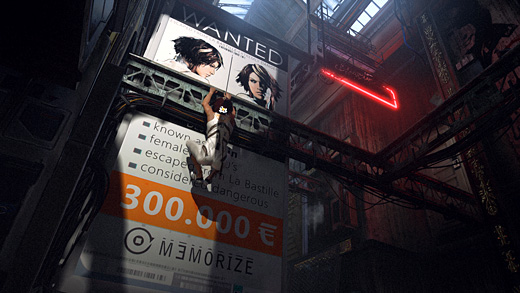 WTF For a game about memory, there are precious few memory-rewrite sequences.

There's no doubt that video games, as a medium, depend on artistry and visual appeal to make them what they are. The video part is right there in the name. However, the game part is just as significant, and probably more so. After all, it's much easier to find examples of wonderfully engaging titles with rough visuals than it is to find things that succeed on the strength of imagery alone.

from DONTNOD Entertainment falls on the wrong side of this video/game continuum. While the style it delivers is superb, the lack of substance is a serious issue.

As the game begins, main character Nilin is recovering from a memory wipe. In the futuristic Neo-Paris where her adventure takes place, adding, removing and re-writing memories is commonplace. Apparently Nilin had a real talent for doing such in her pre-amnesia status as an "Errorist" (essentially a terrorist minus the letter "t") fighting against the oppressive gov-corp that keeps the system going.

While the story seems to promise quite a bit of potential, I found it hard to connect with what was going on, both in regard to the plot and with Nilin herself.

The biggest problem is that Nilin never shows much personality or presence despite her striking design, and I found it difficult to form a connection with her. This blank slate quality makes a kind of sense at the beginning with regard to the amnesia inflicted upon her, but she fails to develop as the game goes on. Simply being a female protagonist doesn't automatically make a character interesting, and she comes off as quite inert.

The script is just as empty and uninvolving as she is. There have been any number of sci-fi books and movies that have dealt with themes of memory and identity, but Remember Me barely scratches the surface of what's already been covered so many times. Instead, it relies on tossing a lot of made-up terms at the player with little context or explanation. Supporting characters are poorly-established, and there's not much weight to any of the events that happen.

Compounding the game's unfulfilling intellectual side, Remember Me doesn't have much gameplay to offer, either. 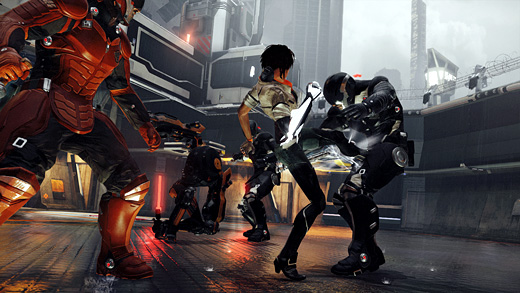 The first element of play is environmental navigation, although I hesitate to call it that since every leap from a ledge or climb path up a tall thing is clearly outlined, every step of the way. It doesn't take any skill to get from one place to the next.

When not in vertical spaces, the rest of Remember Me's world pushes the player forward at a rapid pace. Despite some truly fantastic visuals and amazing scenery, players never get a chance to explore any of it, or engage with it on any level. As beautiful as it is (and it is beautiful) Neo-Paris is smoke and mirrors trying to disguise the fact that the game is a series of hallways broken up by rooms just big enough for combat.

So what about the combat, then? The developers make a big fuss over their combo-style brawling by re-naming everything with unfamiliar labels, but the bottom line is that the player has four pre-set combo strings which can be modified. Although it initially seems that the system will be more flexible than it is, these strings will only accept particular button presses at particular places.

For example, the basic string will always be X,X,X. Players can choose which X-type attack to put in each input, but it's impossible to make it X, Y, Y or X, Y, B, and so on.

This limited system is spiced up by having different flavors of attacks. One does straight damage, one restores Nilin's life, one reduces the "cooldown" time of her special powers, and one is an amplifier of sorts. Depending on which way they're strung, the player can manage the peripheral effects they provide. Need to frequently heal? Create a combo that does it. Want to use special abilities more often? Change one of the combos, and it's easily done.

However, despite this interesting idea, it doesn't change the fact that the combat relies on repeatedly dialing simple combo strings, and feels quite stiff and mechanical to boot. Rather than something to be enjoyed, combat is merely tolerated. In fact, halfway through the campaign, I turned the difficulty to Easy—not because it was difficult, but because it doesn't add anything to the experience, and I just wanted to get it over with more quickly.

gets off on the right foot with an impressive opening and a rare female protagonist, but the overall experience of both gameplay and storytelling is too heavily guided and lacking in depth. It's certainly not bad in any respect, but with so many other titles on the market, it's tough to recommend a middling main character, too much flat combat, and a story that couldn't hold my interest for even half its length. The beautifully-rendered futuristic filth and glory of Neo-Paris is something to see, but Remember Me's title is more a desperate request than a confident command. Rating: 5.0 out of 10.


Disclosures: This game was obtained via publisher and reviewed on the Xbox 360. Approximately 6 and a half hours of play were devoted to the single-player mode, and the game was not completed. There are no multiplayer modes.

Parents: According to the ESRB, this game contains: blood, partial nudity, strong language, violence. The warnings here are appropriate—the tone of the game is of a mature nature, clearly aimed at adults and with a realistic tone to its design. I didn't find any of it to be gratuitous or excessive, but it's clearly not appropriate for children.

Deaf & Hard of Hearing: Dialogue is subtitled, and I did not notice any significant auditory cues that impacted gameplay, either positively or negatively. It's accessible.

Why wasn’t the game completed for the review?

wondering the same, esp. since the finale gave closure to all the characters in what I thought was a fairly meaningful, emotional way, despite the contrivances.

I hear you. The games feels rushed. It feels like a puzzle with missing pieces and you can clearly see he gaps. Stealing memories involves just pressing a button, but it feels like the developers wanted to make more out of it but couldn’t (maybe something similar to memory remixing). Speaking of that, memory remixes are awesome and are the uncontested highlights of the game, but they are also scarce. The plot also seems to lack proper pacing and most of the time it seems that explanations are missing. At one time Edge just casually remarks about an “army of… Read more »

In response to your question, the game wasn’t completed because there was no point. The gameplay was weak and so was the story…

After playing games for so many years, I’m of the opinion that if a game can’t hold my attention and keep me even halfway engaged, then there’s no ending that makes up for the tedium that comes before.

Some may disagree, but that’s why we use the disclaimer so you can judge for yourself. We’re pretty transparent here. = )

Oh, then you probably missed the last remix, which is one of the best.
[SPOILER]