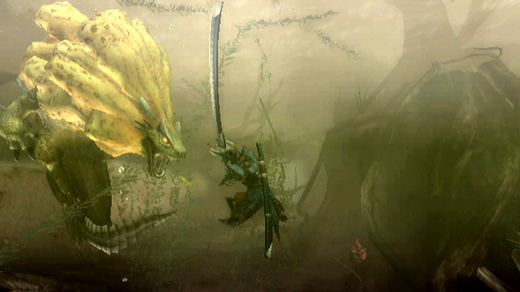 There's been a strange turn of events this week.

I've been eagerly anticipating Red Dead Redemption for quite some time, and my copy finally arrived last Wednesday. I'm huge Western fan, and good Western games are incredibly few and far between, so it was dead center on my radar. I popped it in immediately upon arrival input about an hour into it before I had to go off and do other things. I thought I'd be totally on fire to get back to it ASAP, but here's that strange turn of events I mentioned:

As I was driving around taking care of some errands, my brain kept coming back to Monster Hunter Tri instead.

Since the last post, Monster Hunter Tri has undergone something of a shift. The first six hours or so that I spent with it were pretty slow and tedious. Painful, really. However, I'm a fan of big monsters and an even bigger fan of killing them, so like I said before, I set my mind to sticking with it. Shockingly, the dedication paid off.

Don't get me wrong, there are still a ton of things that need fixing or changing from a critical perspective. The game is nowhere near what it should be in comparison to current standards and norms in development, but the niche subject matter has a great appeal to me personally, and the developers have wisely included some new tweaks to the formula that helped stave off the grinding I was afraid was coming.

For example, players eventually gain access to a small farm that can reproduce important bugs or plants that are necessary for item creation. Players also can employ a fishing boat to go and harvest fish for resources, or to hunt for treasure to boost the player's bank account. Both of these things require minimal effort once they're unlocked, and are each a hell of a lot less painful than physically going out and collecting everything that's needed to craft weapons and armor. They are shortcuts, pure and simple, and Capcom was dead-on correct in adding them. Scouring FAQs has also provided some much-needed information shedding light on some of the game's more obscure elements, as well.

The end result of all this is that playing Monster Hunter Tri has gone from being boring and painful to being slightly faster in pace and a bit more action-packed. It's still not what it could be (or even what I would want it to be) but I am glad to say that I have been able to enjoy the game more than I expected to. This might turn out all right, after all.

Why don’t I see things like that? That’s awesome.

Don’t rush back to Red Dead Redemption, apparently it is totally buggy.

I’m glad you are enjoying MH:T but you seriously need to hurry up! lol Red Dead is a masterpiece that needs to be seen by everybody. Plus multiplayer is pretty cool too, providing we can connect together. Ive found that I can connect to some of my friends, yet others won’t work. I will get booted as soon as they join and vice versa. *shrugs shoulders* Dunno?!