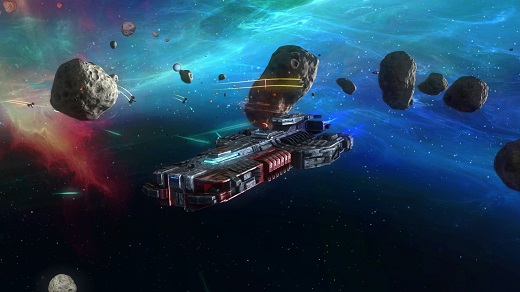 HIGH Setting out into the galaxy for the first time.

In Mike Suskie's main review of Rebel Galaxy, he concludes that the game isn't deep or diverse enough, and after putting in time for this second opinion, I agree. While there were a few moments when I could see the promise in Double Damage's work, crossing the stars quickly goes from being wondrous to being a chore.

After reading the bit of dry text that passes for a beginning, it becomes apparent that there are a lot of systems going on in Rebel Galaxy. The game stumbles almost immediately by failing to include decent tutorials for them, and also by not doing enough outside those systems to get the player enmeshed in the universe.

While the developers toss out cursory explanations for some things, most of what's in Rebel Galaxy is there for the player to discover on their own. Such an approach is fine in certain situations, but too much of the basics are left unexplained. For example, it took a while before I had a grasp on how shielding and armor on ships worked. In another situation I was sent to retrieve some minerals from an asteroid belt, but I had no idea how to mine them when I got there.

The naval-style broadside battling is fine enough, but I felt like it was hard to get a feel for what was going on moment-to-moment. Sometimes I felt like my ship was invulnerable, and at others I was dead before I realized what happened. Part of this problem is due to the game noticeably jumping up in difficulty to prevent the player from blowing through the campaign, and it was tough to get a sense of how my ship stacked up to others. This situation is made murkier because there are dozens of parts and things to equip on a ship, but while some numbers clearly get higher, it's hard to tell what to put resources into first.

Speaking of which, it feels like too much of Rebel Galaxy is about numbers. There are lots of menus, lots of ship components, lots of statistics to look at, but none of those mean a lot when the experience is so flat. The game is just flying from point to point, collecting something, delivering something or answering distress beacons while ship combat breaks out constantly.

At first glance it seems like there's a ton of content here, but it's busywork that exists for the sake of being done. The story couldn't be less interesting, the NPCs are forgettable placeholders, the various "factions" don't have any presence, buying items on one side of a system and hauling it to the other holds no thrill, rescuing ships in need awards a bit of cash but never leads to anything more… it's all just chaff that fails to capture the adventure I'd want from a spacefaring game like this one.

On top of everything else, Mike was right on the mark when he said warping from place to place is boring downtime—due to the distance between points, players are frequently presented with dull periods of waiting as the ship travels. I'd often play some Marvel Puzzle Quest or hit Twitter while waiting for my craft to get where it was going, and when I play a game, I want to be engaged. If I want to mentally check out, I'll turn the console off and do something else.

While Rebel Galaxy is heading in the right direction, it's a long, long way from where it needs to be. With a better story and characters, more intuitive systems, a smaller scale and a host of other tweaks, it could be a real star. At the moment, it's more like a dull job shuffling spreadsheets than the privateering adventure it seems. Rating: 5 out of 10


Disclosures: This game was obtained via publisher and reviewed on the PS4. Approximately 6 hours of play were devoted to the single-player mode, and the game was not completed. There are no multiplayer modes.