The chinchillas are on fire! 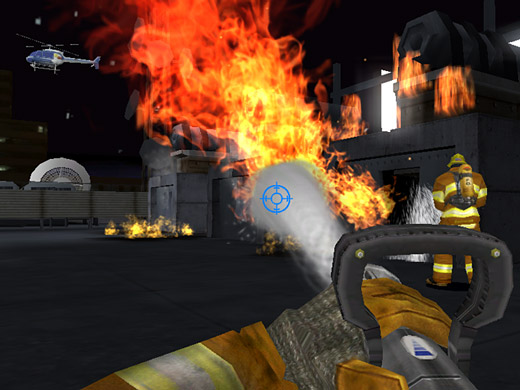 HIGH It's a natural fit for the Wiimote, and a great concept.

LOW The graphics are going to be hard to get past for some gamers.

WTF You expect me to risk my life for some chinchillas?

As frequent readers of this site may know, I'm not the Wiimote's biggest fan. Why? In the vast majority of cases, Wii developers tend to create titles that use its motion control capabilities in annoying, inconsequential ways, or they try to shoehorn its functionality into places it was absolutely never meant to go. Although expectation for this new method of control was quite high at the Wii's debut, I think time has shown that very few minds have figured out legitimate uses for the device that truly enhance the gameplay experience. There are some, however, and Real Heroes: Firefighter is one of them.

The first retail game coming from Epicenter Studios, Real Heroes: Firefighter puts the player in the role of the "Probie"; a new recruit assigned to battle-scarred Company 13. A recent graduate of the Academy, he's got to learn the ropes quick when it comes to putting out fires and saving civilians.

Epicenter's concept of creating a non-combat FPS (first-person shooter) is a brilliant one, and proves to be a perfect fit for Nintendo's hardware. After all, what's more central to fighting fires than a hose? Replicating this real-life functionality with the Wiimote's core use as a pointer makes total sense. Other pieces of equipment vital to the job (axe, jaws of life, etc.) are implemented through brief, mini-game-ish motions. Thankfully, Epicenter knew better than to try and cram unnecessary waggle into every aspect of the game. It only appears where the player would naturally expect it, and for those players (like me) who like it kept to an absolute minimum, there's a control option that simply removes most of it in exchange for the press of a button. Extreme thanks for that one, Epicenter.

In terms of design, the levels are surprisingly lengthy, yet manage to keep a fairly high level of action and intensity. Exchanging realism for a certain degree of facility and arcade-like thrill-factor, the pacing feels right-on for the most part—there's always a civilian who needs an assist, or a blazing pyre that needs extinguishing. Superfluous padding doesn't exist here, and that's a very good thing. 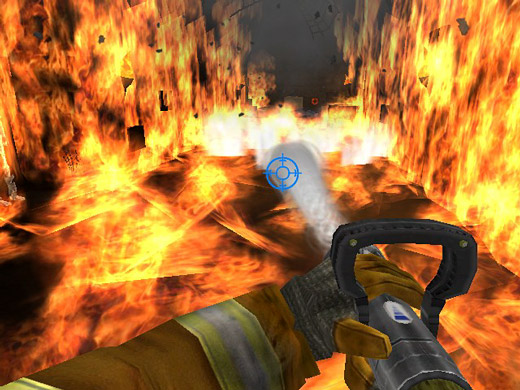 Also serving to keep the energy high, the developers add unexpected little twists throughout each scenario; things like clearing a path through a blaze for a teammate on a lower level, or hopping on a ladder truck for some exterior action. The game trips up a bit with some of the sillier objectives like rescuing caged chinchillas, but these lightweight bits are few and far between.

In terms of presentation, it's a slightly mixed bag. The elephant in the room is, of course, the graphics.

In an appreciated and frank gesture, the developers are quite upfront about acknowledging that the visuals aren't what they could be. Rather than regurgitating some PR babble or trying to ignore it, they've stated several times that as a smaller studio, they simply did not have the budget to push the graphical envelope as far as it needed to go… and it's true. The visuals are certainly nothing to write home about. Taking this unavoidable fact into account, they wisely chose to focus on the overall experience and lowered the MSRP as well. Although I don't usually cite purchase price in most reviews, this was a very sensible move and one certainly deserving of praise in a market that seems to assert any game coming down the pike should start at $60.

Graphics aside, the controls are solid and can be adjusted to player preference, and the voice acting is of a surprisingly high quality. Starring recognizable talents like Jamie Kennedy (my favorite performance of the game), Jenette Goldstein (Private Vasquez from Aliens), and James Marsters (Buffy the Vampire Slayer). I certainly wouldn't have minded a little more story and interaction with my fellow firefighters, but what's here is well done.

Although it's unavoidable that some players won't be able to get past the graphics, those that do will be treated to an entertaining and worthwhile experience for a system that currently boasts the highest shovelware-to-keeper ratio I think I've ever seen. It's certainly rough in parts, but it's got a lot of heart and makes the right moves where it counts. Quite honestly, I'd say it's the best firefighting game created thus far, and I've played them all. With Real Heroes: Firefighter turning out so well on a shoestring, I'd love to see what Epicenter is capable of doing with more funding. Can someone please spare the studio a few million? Rating: 7.5 out of 10.

Disclosures: This game was obtained via publisher and reviewed on the Wii. Approximately 6.5 hours of play were devoted to the single-player mode, and the game was completed one time. There are no multiplayer modes.

Parents: According to the ESRB, this game contains violence. As long as the child in question understands the concept of fires in firefighting, I'd say that this game is quite appropriate for young ones. There is no combat or violence, and the bulk of the action is dousing flames and rescuing civilians. Honestly, I'm not even sure where the ESRB got their warning tag.

Deaf & Hard of Hearing: You shouldn't have any problems. All dialogue is subtitled (it's also available in a re-readable log on the pause menu) and the game displays all pertinent information onscreen. There are no significant auditory cues.