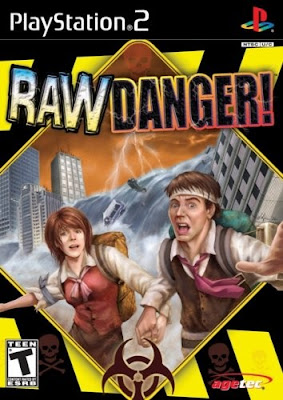 Seriously, who approved this cover art?

There's a little bit of a lull in game releases right now before the total insanity of fourth-quarter holiday sales get started, so I'm taking the time to catch up on a few older titles. I played Colosseum: Road to Freedom on PS2 last week and had a good time with that (check the review HERE) and this week, it's Raw Danger! also on PS2.

Unfortunately, this one isn't going quite so smooth.

The production values and general craftsmanship of the title are pretty atrocious. The graphics are nothing to write home about and there are often camera issues, but my main gripe is that the game seems to be held together with spit and bailing wire. It's just sloppy programming, really– there are dozens of games that push the envelope of what the PS2 can do while humming a lot smoother than this, so there's really just no excuse for how slow, chunky, and unresponsive things are. It's been a while since I had to sort of force myself to sit through a game, but I'm doing it here. Why? Because the concept is pure gold. 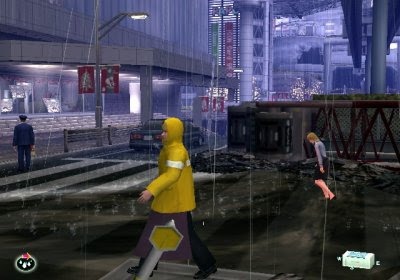 Raw Danger! is the sequel to one of my favorite PS2 games, Disaster Report. That game also had several technical issues, but I don't remember it being as tediously trying as Raw Danger!… though I do admit it may just be my memory glossing over things.

In any case, I would love to see this series land on one of the current-gen consoles. The gist of each is that a huge natural disaster occurs, and characters who are trapped in the city have to survive and find their way to safety. No crazy weapons, no spacecraft, just real-world stuff like dodging debris, finding food, and staying dry. It's a great premise and one that has RARELY been employed in the history of videogames outside of this series, as far as I know. Shooting aliens or performing magical martial arts always entertains, but there's something very immediate and gripping about playing through a scenario that actually could happen. 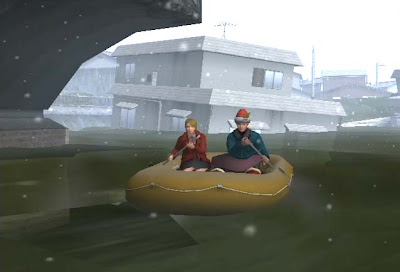 Making my way through torrential water rushing through a parking lot or scavenging usable goods from a wrecked shopping mall capitalizes on knowledge and relationships with the real world as a way of supporting and guiding gameplay choices. If you've ever imagined trying to survive a natural disaster (or if you've already lived through one) then you know what I'm talking about.

The only other series I know of that implements the same sort of "real-world" mechanic is Io's sublime Hitman and its relatively well-replicated environments-and whether you're dressing up like a pizza delivery man to sneak past security or making a raincoat out of a garbage bag and duct tape, it's extremely gratifying to find things that could work in real life also work in a game. If more games did this, I'd be an extremely happy camper.

Now, with all that said… Raw Danger! is still pretty painful to play with the first two hours being somewhat torturous, though the game does loosen up a bit once things get rolling. If this game got an extra million dollars for development and a bump up to run on the 360 or PS3, it would absolutely be a blockbuster.

Disaster Report was more consistent (it helps that it was a single, branching story rather than several interlocking ones), but I think Raw Danger’s mechanics work better – Disaster Report was pretty much instadeath or nothing in terms of challenge. The thirst mechanic was pretty trivial and aftershocks and such rarely did any damage that didn’t regenerate right back. On the other hand, if you get cold and wet in Raw Danger, it really does represent a significant threat to your health. It’s not often going to be a *huge* issue, as there are heat sources(/save points) scattered fairly liberally… Read more »