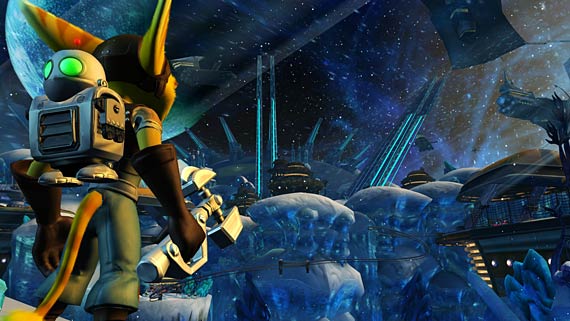 A warm plate of comfort food in electronic format, Insomniac’s Ratchet & Clank Future: Tools of Destruction makes its debut on PS3 to establish a foothold in the action-platformer genre while rounding out the shiny machine’s unimpressive software selection. It’s a welcome entry, but at this point I’d be willing to bet most players know what to expect from it. The territory covered here is well-worn and will hold little surprise for anyone who's played any of the other entries in the series. That's not to say it's bad; it can still be quite enjoyable to take a few starchy bites of something so comfortable and familiar. On the other hand, an argument can easily be made that Insomniac has played it too safe with the ingredients in the recipe. Anyone hoping that cooking things up on a new platform would add unexpected, exotic flavors will likely come away feeling slightly unsatisfied. Like a box of Kraft macaroni & cheese, it may be absolutely competent, but it’s hardly inspired.

Following its own formula, the classic Ratchet structure is reproduced faithfully. Players will find themselves going from one far-flung cosmic locale to the next, collecting a multitude of weapons and upgrading them into ever-more-lethal forms along the way. By breaking every crate in sight and reaping the drops from felled enemies, Insomniac’s heroic duo will constantly be earning bolts (the game's universal currency) and making frequent stops at ubiquitous weapon and gadget shops. Although only a small number of the available weapons pack suitable punch, leveling up the equipment offers addictive appeal. 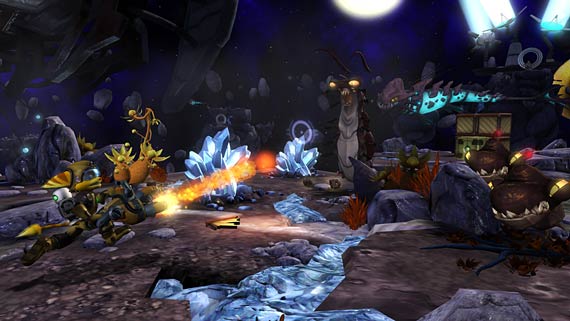 To give credit where credit is due, the biggest advance to be seen in the game is the level of graphic quality. After getting past the title screen, I was quickly overwhelmed by the ridiculously eye-melting opulence on display. I literally had to turn the brightness down and tweak my TV's settings because the images were so rich and vibrant. Each area looks lush and alive, brimming with small details and ambient activity. I can't imagine anyone not being impressed by these graphics, but the truth really is that looks aren't everything.

In every other aspect, Tools of Destruction is just another iteration of standard Ratchet & Clank with some insignificant motion-sensing tossed into the minigames. It's a great product, totally solid and better put-together than anything else currently in its class, but that doesn't change the fact that it's just more of the same. In some ways, it's even slightly lacking compared to some of the previous Ratchet titles.

For example, the developers assume that players are coming to the table already familiar with the characters and previously established history. I've played every game that came before so I had no problem keeping up, but I imagine that newcomers would be a little confused by the failure to properly frame the story and motivate players before the action begins. Besides that, I felt the tutorial messages were on the skimpy side, and not as welcoming as they could have been. Such things may be unnecessary for the vets, but my sense is that the standard polish was skipped over here. Technically, the camera seems unable to properly capture what’s happening onscreen at certain times—it’s not terrible, but I don’t usually fall blindly off platforms as often as I did this time. 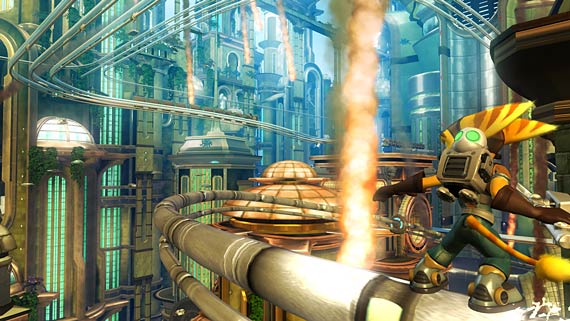 As far as the story itself, Tools of Destruction's writers are running out of steam and phoning it in, with the characters’ usual humor and witty comments missing the mark as often as they hit. The narrative weakly explains Ratchet’s status as the last Lombax in the universe as he’s being chased by an evil emperor bent on his eradication, but it doesn't succeed at being anything more than a painfully thin thread stringing locations together. Granted, great stories have never been the hallmark of action-platform games, but Ratchet & Clank have usually fared better than most and I'm disappointed to see that this installment didn't reach for much.

Although I personally found Ratchet & Clank Future: Tools of Destruction to be a little disappointing, there's no denying that Insomniac rarely fails to produce a title of respectable workmanship. The action here will completely satisfy anyone looking for the kind of lighthearted, kinetic run-and-gun that was mastered several iterations ago, and my grievances with it are more of the intellectual variety than anything else. Although Tools of Destruction is nothing more than a relaunch of very familiar material in HD format, it still delivers a known and respectable quantity in terms of gameplay. That much is clear. However, the level of enjoyment gleaned will depend solely on how eager a player is for another installment that's just like the others, only prettier. Rating: 7 out of 10.

Who cares if it’s the same as it’s always been? No one seems to complain when Gran Turismo re uses the same old boring blend “realistic” race mechanics, so why should Ratchet and Clank receive “special treatment”? I mean, if the formula had been changed, would it even be a Ratchet and Clank game anymore? And besides, being the same as the rest of the games doesn’t warrant giving it only a 7 if it’s still an excellent game. Therefore, I condemn this review as a complete pile of crap, and you should do the same.

I agree. I think though, that while there wasn’t much of a tutorial per se, if you’re adept at gaming in general, it wasn’t too hard to figure out what to do. The story was lacklustre, sometimes humorous, but at night when I played with the volume down and didn’t catch everything, I didn’t feel like I was missing much. The gameplay is tight, I’m a newcomer to the series so I’m sure that’s to be expected…I thought the sixaxis utilization was pretty fun though, and of course, looked fantastic falling through space traffic. Unfortunately I think your review points… Read more »