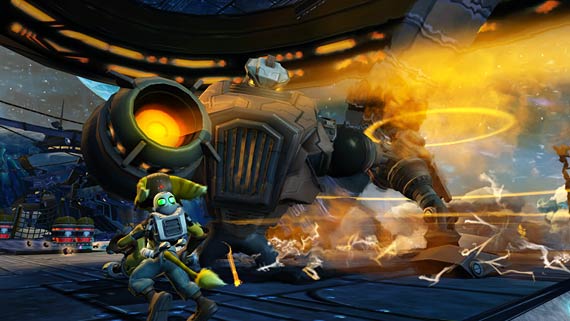 Parents shouldn't be scared off by the unexpectedly plentiful warning tags attached to the E 10+ rating. The overwhelming majority of content in the game revolves around the heroic furry alien using several different weapons to blast pirate robots, construction robots, combat robots… oh, and some alien bugs and dinosaurs, too. Most things explode in a shower of nuts and bolts, although a few go "boom" accompanied by a squish of green liquid. The alcohol reference is because the robot pirates mention "grog", and I'm assuming the language reference is because those same miscreant pirates use the term "wench." If there was anything more intense than that, I missed it.

Action gamers will most likely already know what to expect from this title. It's a lot of running and gunning, and just as much leveling up of weaponry. The graphics are phenomenal, and outside of the occasional unsatisfactory camera angle, everything is completely competent and solid. If you've got a craving for the same action that was delivered on PS2, this game captures it perfectly. If you've had your fill, there's nothing new here that breathes any kind of freshness into the formula.

Deaf and Hard of Hearing gamers won't have any problems. All of the dialogue is subtitled and there are no significant auditory cues during gameplay. Bright explosions and vivid laser blasts telegraph the action on screen, so nothing is lost by going through the adventure on visuals alone.