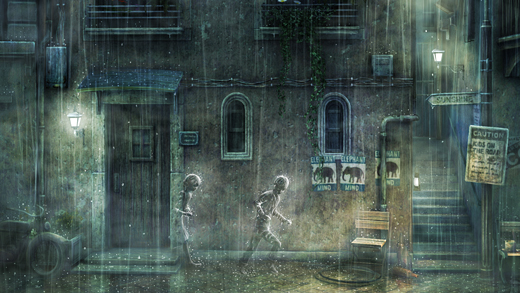 HIGH Being invisible is a great idea for a main character.

LOW The gameplay is too basic to be enjoyable.

Although players don't know exactly what goes on behind the closed doors of game design meetings, it's possible to look at a finished product and make some guesses.

In the case of Rain, it seems the goal was making an overtly art-house title by mashing together elements taken from indie darlings and Frankensteining them together to create the ultimate piece of critic-bait. It's a rare that I come across something that feels so disingenuous, but while I was playing Rain, I felt like a shining fishhook was constantly dangling in front of my face.

Hear that music? Be sad!

Look how lonely this vista is! Feel melancholy!

These creatures are strange! Be unsettled, yet curious!

Although the story remains somewhat vague from start to finish, the gist is that a little boy is sick at home, in bed. As he sweats under his blankets, his ghostly doppelganger sees a similarly ephemeral girl outside his window being chased by monsters. This spirit-version of the boy sets out to help the girl, and soon discovers that he (and the rest of the inhabitants of this strange existence) are visible in the rain, and invisible when under a roof or in a dry space.

While limited invisibility in a world where precipitation is constant seems ripe for exploration, the developers do precious little with this mechanic, or anything else in Rain. The biggest problem for me is that the game doesn't seem to know what it wants to be, apart from artistic.

The gameplay mostly consists of having the boy perform extremely simple actions like moving from awning to awning when a creature's back is turned, or distracting creatures that block his way by splashing in a puddle and drawing them away with the sound. It feels slightly more purposeful when he finally meets the girl and they must perform certain actions together, but there's no real nuance or depth to any of it. It's also compounded by limiting the player's options to only the exact thing that must be done at any given time, and then highlighting that correct action to make sure that it isn't missed. 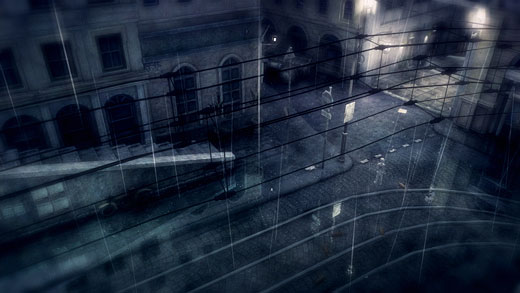 For example, if a ladder must be climbed, it glows and the word "climb" appears. There's no crime in this, but in one section there was another ladder and the game acted as if it didn't exist because that wasn't the right way to go. This tight restriction on interaction applies to other aspects, as well. Certain things can be climbed, but others can't for no discernible reason. A large object can be pushed if that leads to the correct path, but other things which seem like they should offer little resistance are immovable.

It becomes quite obvious from the start that there is only ever one correct way to go and one correct thing to do at a time, so there's very little joy in performing these tasks. Should I feel as though I accomplished something by doing the only thing open to me after being prompted by the developers? It's such a controlled experience that it seems more suited for younger players, or those who are new to games.

This oversimplification doesn't do Rain any favors, since these tasks actually take away from what little ambiance it manages to conjure up—there are a few times when creatures are absent and the player can briefly wander unmolested through the abandoned European city where the game takes place. Between the constant downpour and a genuinely soulful soundtrack, the possibility of a more evocative experience occasionally surfaces, but disappears the moment the player must climb more conveniently-placed boxes, or dodge more stiffly-animated dog monsters.

Rain is also hurt by keeping so much of the story and characterizations vague. The boy and girl never speak, so the only information given is provided by text which appears throughout the environment. There's no relationship established between the characters apart from the fact that they both seem to be ghosts, and the first half of the game is a series of tediously drawn-out sequences where the boy is struggling to catch up with the girl.

Later, a certain story element is revealed which suggests that Rain's various elements are about to come together, but this semi-surprise (and that's being generous) doesn't make any strong connections to the world the player is in. The ending of the game seems to contradict what the developers hint at beforehand, to boot.

Between Rain's muted visual tones, silent child protagonists, ambient narrative text, intentionally vague story, weird creatures and other obvious attempts to be "artistic," the developers don't seem to understand that it's not really the trappings that make something emotional or memorable, it's the sentiment and heart underneath it. Rain tries to emulate the form of others, while totally failing to capture the same substance. The result? A forgettable also-ran that feels more like the product of a committee than someone trying to bring their vision to life. Rating: 4.0 out of 10.


Disclosures: This game was obtained via publisher and reviewed on the PS3. Approximately three hours of play were devoted to the single-player mode, and the game was completed. There are no multiplayer modes.

Parents: According to the ESRB, this game contains fantasy violence and use of tobacco. I have absolutely no idea where the tobacco comes into this, but the violence occurs when one of the creatures catches up with the main character. It's not graphic in any way, but it's clear he is being bitten, getting hit, or suffering some other similar fate. It's pretty harmless.

Deaf & Hard of Hearing: There aren't any problems here. There's very little information city and sword, and what little there is comes in the form of text. There are no voice-overs, or any audio cues relevant to success.