Aiming At The Wrong Target 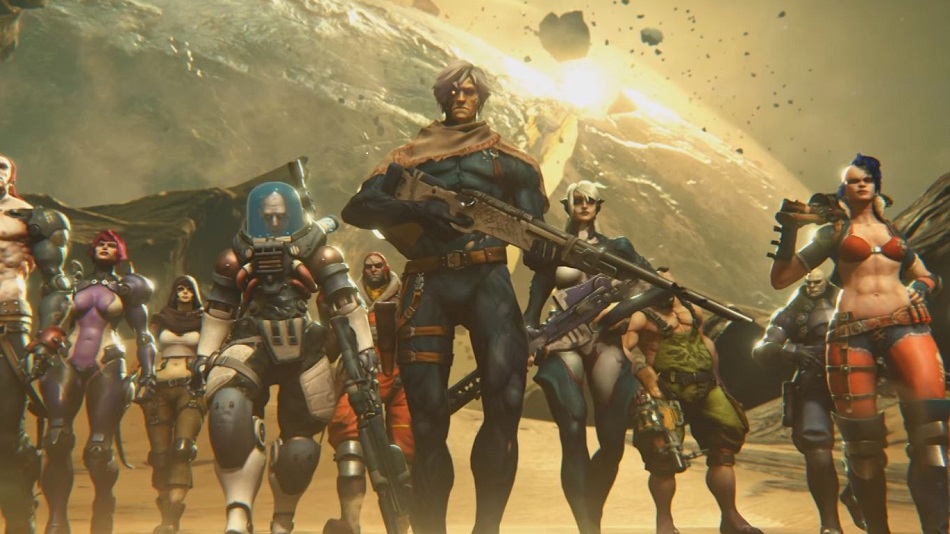 LOW The battle against General Marmalade.

As I was cobbling together my year-end list, I got to the “unrealized potential” category and didn’t have anything to put in the slot until I played Raiders of the Broken Planet. So, thanks to this project from MercurySteam I’ve got enough content to hold up my end on our annual podcasts, but I can’t help but feel bad for the team, and for this project.

Putting all my cards on the table right away, I like this game. There are a lot of good things in it. It’s got some neat ideas. The style and aesthetics are great. One guy has a jetpack! But stepping back and evaluating it as a whole? I find it catastrophically misguided.

First things first, the game is just confusing in and of itself. It’s tough to tell what it is from a cursory glance, and even after I was into the content, it was still amorphous and ill-defined. That confusion began with how to get the game.

The base offering is a free-to-play two-level demo called Eternal Soldier. The average player will run through this content in the blink of an eye, but the devs are hoping to get them interested enough to pop for the paid content. Currently, there are two $10 add-ons: Alien Myths and Wardog Fury. Each one adds four more levels, so if a player bought everything available at the moment, they’d have ten levels total. 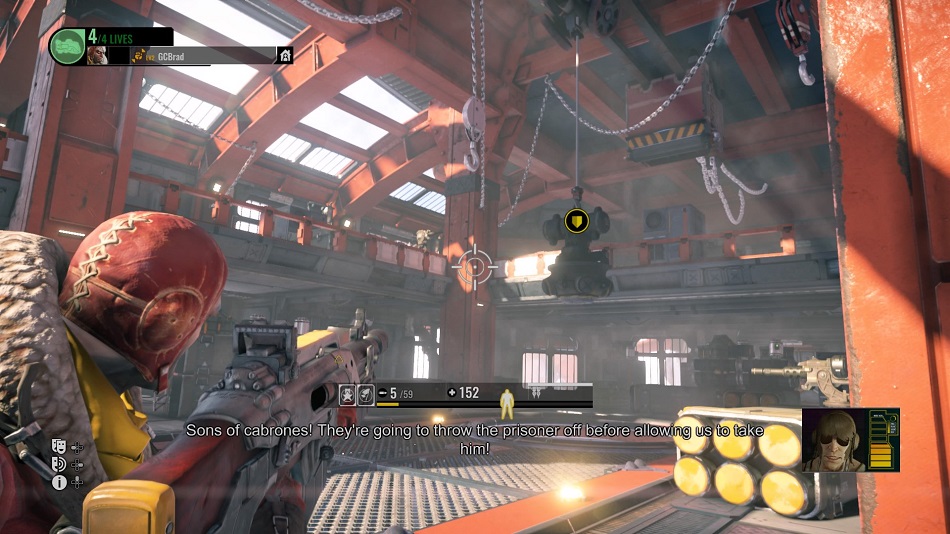 So, what is it? At its core, Raiders is a third-person action title. Players can choose from one of several characters and tackle small, bite-sized levels focused on one or two objectives. However, there’s a catch. Instead of having a traditional campaign, Raiders wants players to group up with others and repeat the same levels areas over and over again to earn in-game currency and unlocks. Based on this framework, I can only assume that MercurySteam wanted Raiders to tap into the current holy grail of games-as-service, but their project feels more like it should be a B-tier one-and-done weekender, and I mean that in the best possible sense.

The plot is serviceable sci-fi about rebels on a wrecked planet where everyone’s after a precious resource. The cast of characters is both sexy and grotesque in equal measure, and everyone’s personality is over-the-top. The action feels a bit on the chunky, sluggish side, but it fits the game and gets the job done. However, while the missions are just fine once or twice, they’re not something I’d want to play repeatedly, and unfortunately, that’s exactly what the developers are counting on.

Aside from the fact that Raiders isn’t remotely close to being an e-sport or something friends are going to group up every Friday night for, there’s just no one playing it. I tried on multiple occasions to jump into some co-op matches and never found a single one. Not one! The game also offers an ‘antagonist’ mode where players can be an enemy working against groups of real players, but again, after multiple attempts not a single match was found. I’m sure a large part of the problem is that any potential playerbase is split by requiring purchase of the extra levels — it’s a tough hurdle to overcome.

Fortunately, it’s possible to play through all ten levels in a solo mode. I had a decent time working through each stage and seeing what MercurySteam had cooked up, and quite a lot of it is pretty neat – there’s a solid ‘Mad Max in space’ vibe, some of the missions are novel (exploding floating fatty mutants was a highlight) the graphics are great, and each character has their own flavor. 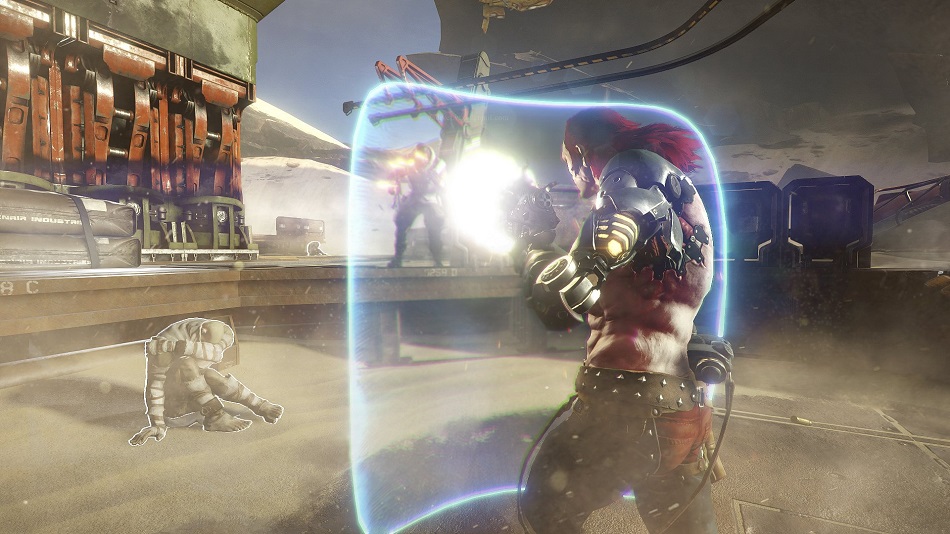 For instance, shaved punk Alicia is great at running and gunning, and her aerial maneuvers make her queen of verticality. Lycus has a forward-facing shield to protect him as he rushes headlong into crowds, and Harec can project his spirit across large distances to get the drop on far-away enemies. There’s a good variety available, although some have to be unlocked through play and several need to be purchased with in-game or real cash.

Unfortunately, soloing Raiders is unpleasant on anything past Easy, and Easy awards basically no resources beyond a pittance of currency. After completing all ten levels, I couldn’t afford to unlock a single character. Also, there are other rewards to unlock – new weapons, new skins, etc. – but none of these can be earned playing alone. No, they’re only given out to those who play in groups, and since nobody is online, there’s no easy way to work towards them.

Raiders is host to other frustrations beyond the misplaced emphasis on being a service. For instance, the melee has a rock-paper-scissors aspect which is fine when the player’s on the right side of it. However, when an enemy gets the drop (or a player chooses the wrong action) the result is a frustrating instant death.

Another issue that irked me was a lack of mid-mission checkpoints. To be fair, the devs have a system that grants four chances, but when these four lives run out, there’s a ‘danger’ period while the lives replenish. If a player goes down before the ‘danger’ is over, it’s back to square one. I’m guessing this is much less of a factor with teammates, but this caused me a few teeth-gnashing moments. There were also times when I needed a certain enemy to spawn in order to complete an objective, and the delay before they spawned was far too long. Running around a level and dodging fire while waiting for the chance to be able to do something isn’t great.

After having gone through as much of the content as I could without teammates, my take on Raiders of the Broken Planet is that it’s a great B-tier action title shoehorned into an episodic games-as-service model that absolutely does not fit. If it was a standard single-player or couch co-op effort, episodic or not, I’d have no problem recommending it to folks who don’t mind rough edges wrapped in style and character. However, I’ve got serious reservations that this project could have ever worked, and these concerns seem founded since no one’s playing. Broken Planet is a great property with a lot of potential, but it’s in desperate need of a structure that makes more sense. Rating: 4.5 out of 10

Disclosures: This game is developed and published by MercurySteam. It is currently available on PS4, XBO and PC. The first installment is free-to-play and the two add-ons were obtained via publisher and reviewed on the PS4. approximately 5 hours of play were devoted to the single-player mode, and the three pieces of content currently available game were completed. No time was spent in multiplayer because no matches were able to be found in either cooperative or “antagonist” modes.

Parents: According to the ESRB, this game is rated M and contains Violence, Partial Nudity, and Strong Language. There’s a healthy amount of salty language, the character designs are definitely on the sexual side, and I did notice at least one or two instances of overt sexual suggestion although there is no explicit sexual content. The violence is pretty standard shooty-punchy stuff.

Deaf & Hard of Hearing Gamers: All dialogue is subtitled. In battle, some enemies give brief audio cues that are not visually displayed, but they’re very minor. A little bit of extra looking around will more than compensate for any audio missed.

The MP is a TON of fun, like it boosted the game 2+ points for me, recommend trying again.

Like I said in the review, I tried *several* times with no matches found. I’ll try again when the third DLC drops but so far, nothing.