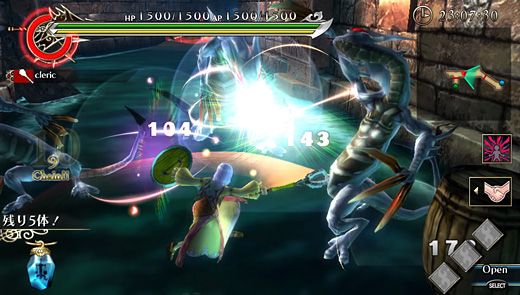 WTF Who thought locking the player in ambush killboxes was good design?

Developers that emulate successful formulas are faced with a difficult problem: how to create something that's at least as good as the inspiration, if not better? It's a tough thing to do, and titles that take the "me-too" approach run the risk of being categorized as ignorable imitations. Consider then, the questionable wisdom of copying something that's not just successful, but something that sets the standard for its genre.

Although I'm not sure exactly how to classify Monster Hunter (a console-based MMO? A giant-animal-killing sim? The deepest action-RPG of all time?) there's no question that it wrote the book on what it does, and its admirers (like me) are incredibly devoted. Several studios have tried to grab those fans with their own work, yet none have succeeded. Ragnarok Odyssey

comes closer than the rest, but it's still just a shallow imitation following in larger footsteps.

I'm sure some readers will think it unfair to compare Ragnarok to something else rather than reviewing it on its own, but there's no mistaking the overt Monster Hunter impersonation. The third-person, real-time structure is the same, the hub world and "rugged frontier" setting are the same, the giant bosses and a sturdy fort to keep them back are the same, and smaller details like tweakable armor and weapons are the same… certain environments in Ragnarok even look like places from Capcom's cult franchise. It's just too close to ignore. Where the game differs are its overall depth and quality of combat.

Ragnarok Odyssey begins by having the player create a character to their specifications. After doing so, a weapon class must be selected, and a good number of options are available, such as the basic "giant sword," a hammer with a drill on the end, twin daggers, a ranged bow, and more. After an avatar is set, the player is introduced to a small base of operations offering various shops, amenities, and places to select quests.

At first blush, the game seems to promise engrossing action and the kind of character-building and customization that can keep someone hooked, but it's not long before the hollow core of the game is revealed. The developers of Ragnarok Odyssey may understand Monster Hunter's form, but they definitely don't come close to matching its function. 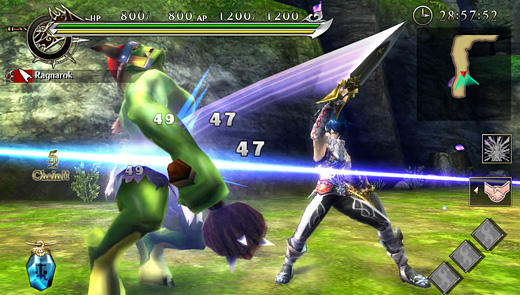 The most basic problem (or at least, the one which becomes apparent immediately) is that the combat is straightforward, simplistic and repetitive. As the player goes through each mission, they come across large numbers of enemies. The AI of these monsters is basic, and doesn't pose any tactical challenge unless they appear in small spaces with overwhelming numbers—an annoying trick the game pulls often. For the most part, the player simply locks onto a given creature and starts whacking away until it's dead. The controls are solid and handle smoothly, but there's no satisfaction in hammering the Triangle button a thousand times against sword fodder.

The combat might not be so notably boring if the quests had any juice in them, but they're as shallow and dull as the fights. The quests that I saw were all variations on "Kill X Monsters" or "Collect X Item." (And collecting those items is done by killing monsters…) Sometimes a quest will include something bigger and meaner unexpectedly, but it's a simple matter to avoid powerful foes and complete the actual objectives. Repetition sets in quickly, and being required to kill 80 of anything makes my eyes cross with boredom.

If nothing else, I hoped the saving grace of Ragnarok Odyssey would be an interesting skills/armor/equipment system. I freely admit that I am a huge sucker for any game which gives me a good reason to play dress-up with my character, but even here it comes up empty. During my playtime, I saw a disappointing number of weapons, one-piece outfits and hats. Also, because the skills characters have are associated with equippable items, the various costumes and headgear are essentially cosmetic.

For example, the Thief suit may include increased attack damage, but that effect (embedded in a "card") can be removed and given to another outfit. Hats don't seem to have any powers whatsoever. As such, there's no real reason to wear any one piece of clothing or armor above another and there's not much to fiddle with. This oversimplification of gear instantly removes a huge amount of appeal from a title of this sort.

takes almost all of its major cues from the leader of its genre, and then flatly fails to deliver a commensurate level of depth in combat, quest design, and equipment tinkering. It looks pretty, it's easy to play, and the Vita has been fairly starved for quality content over the last several months. It's not a terrible game, so there is a slight case to be made for it. On the other hand, it's so shallow in every respect that I would find it difficult to recommend to anyone, Monster Hunter notwithstanding. Rating: 4.5 out of 10.


Disclosures: This game was obtained via publisher and reviewed on the Vita. Approximately eight hours of play were devoted to the single-player mode, and the game was not completed. One hour of play was spent in multiplayer modes. The online connection was stable, and there were no technical issues.

Parents: According to the ESRB, this game contains violence, language, mild blood, and use of alcohol. During my playtime, I didn't see anything of any concern here. The action consists of swinging weapons around wildly without any real gore or explicit quality to it. As far as the alcohol goes, there is a tavern in the game. Is that enough to justify a warning? Apparently so. Everything here is on-par with any tweenish Anime, so I'd say that most kids should be okay.

Deaf & Hard of Hearing Gamers: There shouldn't be any problems. All dialogue is subtitled, and there are no significant auditory cues during gameplay. I had no difficulty playing without the sound on, so my guess is that it's fully accessible.

Yeah if you did finish the game, they use alcohol to celebrate there victory.

This game is my crack personally.