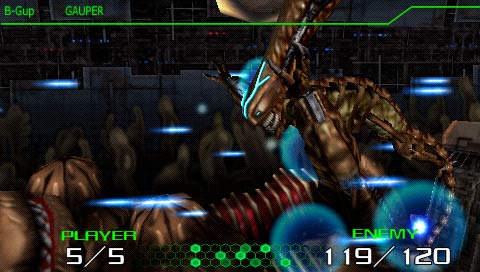 Parents don't have anything to worry about. The only violence and blood are of the spaceship lasers-on-goopy-alien variety with no gore, and no explicit scenes of any sort. There is no questionable language, or sexual content. Totally harmless stuff, if you ask me.

R-Type Fans should definitely check the game out, just be prepared for a total paradigm shift-albeit one that works. The classic formula translates amazingly well to the strategy scene, so if you can accept the swap of twitch for think, you'll be quite pleased.

Strategy-RPG Fans will find a unique, engaging entry to provide a change of pace from the standard knights in armor, politico-snoozefests we usually get in Strat-RPGs. The formula isn't as finely-honed as some, but it's well worth a purchase.

Deaf and Hard of Hearing gamers will have no problems. All dialogue comes in text form, and since it's a turn-based strategy, there are no auditory cues necessary for gameplay. I actually played about 3/4ths of the game with no sound at all, and had no difficulty whatsoever. Total accessibility here.