Spent a fun couple of hours playing PomPom's Astro Tripper on the PlayStation 3. A download available for $5, it's a colorful, slightly abstract shooter similar to one of my favorites on 360 Arcade, Mutant Storm Reloaded. 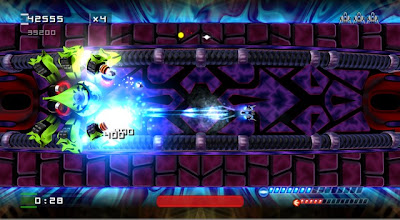 It appears simple at first, but there is a nice level of depth to it without being overwhelming. Recommended.

Without having anything else really juicy to sink my teeth into, I hit my to-play stack and came up with Crimson Sea 2, from Koei. I'm not at all a fan of their infinite Dynasty Warriors games, but I had an okay time with Devil Kings and I was willing to give this one a shot since it's more about aliens and guns than a cast of characters from Asian history. Although it's really simple and straightforward (and the camera friggin' bites) it's not bad… there's something intrinsically rewarding about taking out hordes of aliens and leveling up equipment, and I greatly appreciate a game that includes a rapid-fire function so I don't need to kill my thumb. It's keeping me busy enough, though I will say that I'm glad I only paid $10 for it… 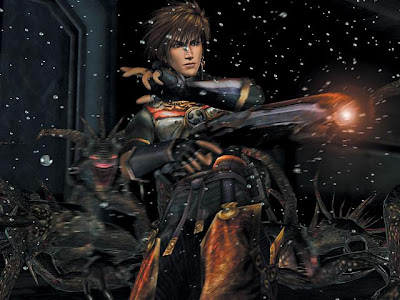 The character design is pretty atrocious, though. More than a few times, I thought I'd be more into the experience if the characters looked more Sci-fi and less period-costume fruity.