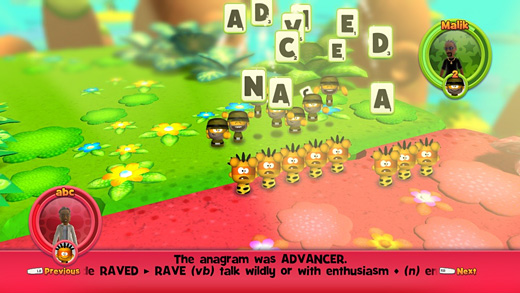 HIGH Getting the anagram in a game-winning skirmish.

LOW European spellings and foreign words not in common usage.

Take Scrabble and combine it with a Risk-like board with property to be conquered, add some online functionality, tweak a few things, and the result would probably be something pretty close to Quarrel

In Quarrel, the goal is to gain total control of a map, and this is done by fighting for territory by using words, not weapons. The game can accommodate up to four players at the same time but regardless of how many are in a match, the basic mechanics are the same: each player gets an identical combination of eight letters and must come up with the best word.

Just like Scrabble that I mentioned above, each letter has a different point value, so it's quite possible for shorter words to beat longer words. This is good, since in addition to crafting words, Quarrel asks players to manage cute little soldiers at the same time. Their purpose? Players can only make words with as many letters as they have soldiers. Down to three men on a square? The longest word able to be made will have no more than three letters. Have the maximum of eight men on one spot? It's possible to go for the top-scoring anagram by using every letter.

Including both territory and soldiers gives the game a strategic element, and this angle is increased by adding a time limit to the "combat." In the case of a tie between players, victory is decided by who took the shortest amount of time. It's a nice idea, but there are some inherent flaws. For example, players with a chatpad or keyboard will always have a time advantage over those using a standard controller, and trying to re-enter a word after one's been disqualified by the AI eats up even more time.

Entering incorrect words may not seem like a common problem, but I was surprised by how often a normal word like "June" or "Monday" wasn't accepted. I also spotted a few European spellings, and several words (especially the eight-letter anagrams) were foreign terms I'd never heard in my life. Abhenrys? Yashmacs? Machairs? Come on. I get that some of these exotics might be commonly used in other parts of the world, but for a game presented in English, it seems that relying so heavily on words from other languages isn't quite fair. Maybe this isn't a problem for people who play word games more regularly than I do, but I found it sourly offputting to have to try and guess words that I don't have a snowball's chance of recognizing.

Most of my issues with speed or esoteric vocab went away when playing against another person instead of the AI, and that makes perfect sense. I'd much rather lose to someone who is genuinely better than I am than against a program with so many inherent, frustrating advantages. With living, breathing opponents, Quarrel is quite engaging and enjoyable despite the constant stress of performing under a time limit, and the fact that it's available for only 400 MS points ($5.00) makes it even more attractive.

(Oh, and a quick word of advice for multi fans: I found the game most enjoyable as a 1-on-1. Any more than that, and matches between similarly-skilled players can drag on forever…)

Although I may have some issues with its vocabulary, the clever combination of elements taken from other games create a uniquely approachable experience that manages to incorporate strategy, multiplayer, and good, old-fashioned boardgame sensibility. It might not ever be my Friday night go-to, but Quarrel

is a no-brainer for anyone who's got an extra five bucks and a few wordy friends online. Rating: 7.0 out of 10.

Parents: According to the ESRB, this game contains fantasy violence—although saying this game is violent in any sense seems like an absurd stretch of the imagination. The only "violence" of any sort is watching hyper-cartoony characters gently toss letters at each other. As far as I'm concerned, this game is completely safe for players of all ages.

Deaf & Hard of Hearing: You will have no problems playing the game. There is no spoken dialogue anywhere, and all communication happens on screen via text. There are no audio cues necessary for gameplay. This title is completely accessible.

“June” is a proper noun, while “jun” isn’t. it’s (i think?) north korean currency. it seems pretty common for most word games to not allow proper nouns – that would explain why another ‘normal’ word like “monday” is blocked as well.

“June” and “Monday” are proper nouns, and like Scrabble, proper nouns are not allowed. Fantastic game and a bargain to boot!!