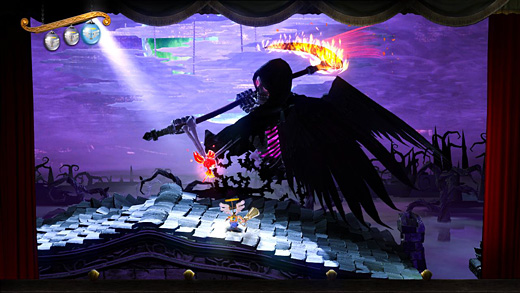 LOW Finding out the heads aren't good for much.

While I'm a believer that a strong premise can carry a game far, there's no premise strong enough to do all of the heavy lifting by itself—the surrounding elements need to meet any big idea at least halfway. As such, Sony's Puppeteer is the perfect example of a great concept let down by weak content, and it's a real shame to see its potential go unfulfilled.

The winning concept is that this side-scrolling platformer is presented as if it were a play being performed on stage. There's a rich, red curtain which opens before a level begins, the backgrounds change on-the-fly as though invisible stagehands are working up a sweat behind the scenes, and an unseen audience claps, boos, or holds its breath when something appropriate happens on-screen.

This theatrical conceit is something that very few games have tried, and the developers do quite a bit with it. It's neat to see puffs of smoke or leaves on a tree appear paper-thin and prop-like as if in a high school production, and large characters look as though they're giant puppets being manipulated with sticks, pulleys and rope. In terms of visuals, Puppeteer has tons of interesting things going on, but the rest of the game? Not so much.

For example, the main character is a wooden boy named Kutaro. He's lost his head and can find various replacements throughout the levels—things like frogs, skulls, mushrooms, willow trees, taiko drums and more, but this whole aspect is a shallow, wasted opportunity.

Rather than the heads actually changing Kutaro's powers or how he functions, the heads trigger "wheel of fortune" bonus games (with a 30% chance of hurting him!) or open small side-areas where worthless doodads can be collected. There's no real incentive to manage the heads being carried (up to three at a time) and I never seemed to have the correct ones on-hand to access this stuff, anyway. After a few levels, I just ignored the heads completely and felt like nothing of significance was lost.

The platforming feels equally bland. The high point of the action is that Kutaro finds a pair of magical scissors, which he can then use to traverse parts of the game by "cutting" through things while being dragged along behind them. Although this aspect comes into play cleverly during the larger-than-life boss battles, it doesn't develop much over time.

The rest of the gameplay is slow-paced run-n'-jump. Since the heads have no effect, Kutaro makes his way through the levels quite predictably. Even worse, the controls feel a bit loose, and I found myself missing jumps that weren't especially difficult. Combine this with checkpoints that can put the player too far back and areas that go on for what feels like twice as long as they should, and Puppeteer becomes a bit of a grind rather than the whimsically amusing experience it's aiming to be.

This lack of excitement isn't helped by the story or cut-scenes. Although the voice acting is absolutely stellar, the narrative interludes go on for far too long and aren't nearly as interesting as they think they are. None of the characters managed to connect with me in any way, and Kutaro himself is a personality-free silent protagonist. I'm not the kind of player that usually skips dialogue, but I found my patience sorely tested by the voluminous chatter here. It's an awful lot of weightless blather to listen to.

As much as I like the idea of adventuring with a wooden boy on a magical stage, Puppeteer is one of those unfortunate projects that starts off in a great direction and then fails to flesh out and support the premise. It certainly looks great and the voicework is top-notch, but with a script, characters and gameplay as flat as the theatrical props the game emulates, its charm wears off long before the final act. Rating: 6.5 out of 10.

Disclosures: This game was obtained via publisher and reviewed on the PS3. Approximately four hours of play were devoted to the single-player mode, and the game was not completed. There are no multiplayer modes.

Parents: According to the ESRB, this game contains alcohol references, fantasy violence, mild language and suggestive themes. For an E+10 game, these warnings feel like they're stretching a bit. The violence sees the main character snipping some generic monsters with his scissors and some of the boss encounters can be a bit frightening, but it's generally quite mild. I don't recall any instances of language, alcohol or sexual content, so if that stuff's in there, it wasn't problematic enough to remain in my memory.

Deaf & Hard of Hearing: You won't have any problems. Subtitles can be turned on via the options menu and there are no audio cues necessary for successful gameplay.

first of all, thanks for reviewing the game. second: its nice to see a person to not give out the average 8-9-10 scores. i didnt buy the game, but iam planing to. you only dropped 4 hours into the game??? i think thats not enough to judge the full game. i havent played it, but sometimes you will see the full potential after 40-50% of the first singleplayer-walkthrough, thats why iam complaining. but beside that, i like you review. iam going to buy this game anyway, because these are some major gems, which will be forgotten games of the year,… Read more »

I used to think i needed to complete every game before a review, but if something’s so bad that it makes me want to quit, then i see that as valuable commentary on the game itself.

I honestly couldn’t trudge through any more. YMMV, but that’s why we list our playtimes in the disclaimer. ^_^