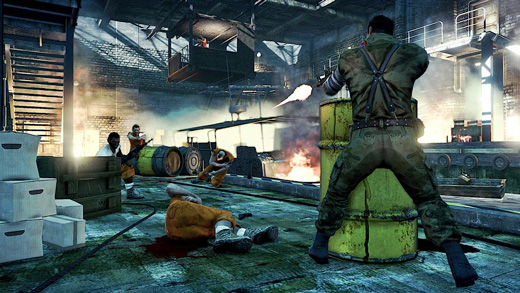 I haven't been up on my download titles and the way I should lately, so I've been trying to rectify that over last week or two. I decided to comb through the PSP Minis store alphabetically and see what caught my eye. There's a whole lot of junk in there, quite frankly, but there are some nice titles if you look hard enough.

Here are some real winners that I recommend:

Fighting Fantasy. I've mentioned these before, but they're worth mentioning again. Taken from the book series by Steve Jackson Games, both The Warlock of Firetop Mountain and The Talisman of Death are text adventures that the player reads through like a book. At certain junctures, you make a choice (do you go down the tunnel, or do you climb the ladder?) and a combat minigame pops up when enemies are encountered. For those of you who like to read, or those of you who grew up books like Fight Fantasy or Choose Your Own Adventure, these are absolute gold.

Jelly Pops. I'm a big fan of PomPom Games, and everything I've played from them has been a winner. This one is no exception, despite the completely absurd and nonsensical title. The player takes control of a snake-like creature and scrolls constantly from left to right. The snake's life is constantly depleting, so it's a race against time to keep eating life-ups long enough to get a high score. Each level has different variations (color combos, avoid spikes, etc.) that give the game legs, and there are different faux-Achievements for each level that keep you coming back for more.

Babel: The King of the Blocks. Kind of a three-in-one title, this game stars a little Egyptian kid who needs to earn his stripes by completing three different physics-based challenges. One is building a tower with differently-shaped blocks that fall similar to Tetris. The second has him piling blocks on a balancing board, and the third challenges him to stack blocks over a pit by carefully arranging them so that they support each other without falling. It might not sound that exciting from the description I've written, but I've found myself coming back to this one time and time again. The physics are spot-on, and it's easy to get a few quick levels in on the go.

I still have a few more letters to get through in the Minis store (I was going alphabetically, remember) so if I find any more worth talking about, I'll update.

The demo for Kingdoms of Amalur: The Reckoning hit the 360 a few days ago, so I gave that a whirl. I've been hearing from some sources in the know (also known as @finalmacstorm) that this was one to watch for, and after having gone through the demo, that info seems to have panned out.

It's a little hard to describe (and of course the final version will have features that the demo couldn't cover) but it's best described as a third-person action game combined with dungeon crawling loot elements and some quests/open areas that are vaguely Skyrim-Lite-ish-ish.

From what I played, my gut is telling me that this one will be kind of a straightforward grinder with a whole bunch of magic and weapons to keep the player going until the end. Nothing wrong with that at all, and when you're in the right mood for it, this type of game (if my impression ends up being correct) can be fantastic. I will definitely be giving the full version a look-see.

The Ryder White DLC for Dead Island was unexpectedly announced for launch on 1/31 (PS3) and 2/1 (360), $10 on both systems. I was fortunate enough to get my hands on an early copy and I've played through the entirety of it. Reviews are still under embargo, but I can share a little bit of information…

It's a one-player campaign that runs about 4-5 hours, give or take. It's much more focused and linear than the main game, and Ryder himself is at level 15 for purposes of stats and such. There is no skill tree or leveling up, so players will have to make the most of this military man as he is in order to get to the end of the content. PROTIP: The difficulty is much higher here than it is in the core game, but to balance that out, guns are about 42,000 times more useful. If you plan on checking this DLC out, remember that. (Props to sandwich eater @MitchyD for hipping me to that fact.)

I'm working on the review now, so you can look forward to that sometime after the embargo lifts.