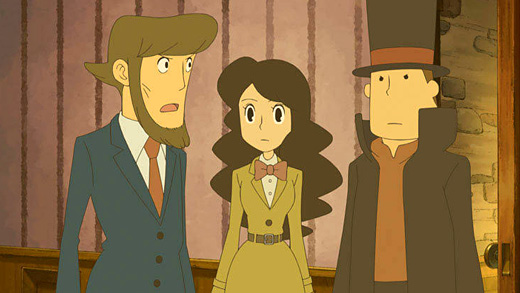 LOW Buying all the clues to a puzzle and still not knowing how to solve it.

When it comes to Professor Layton, his young assistant Luke, and the European café music of Level 5's wildly successful puzzle franchise, I'm a fan. The aesthetic and tone of the series is utterly charming to me, and the Layton games have been great fallbacks when I need a reliable time killer on the go. I'd been looking forward to getting another fix since wrapping the last one, but I have to agree with Sparky when he says that Last Specter

is the weakest in the series. To say that this was a personal disappointment is putting it mildly.

Although the game still checks all the same boxes and offers more of the formula fans expect (and really, that's not a bad thing in this case) it feels as though the developers are running out of steam after four games in four years. The biggest example was that the flaccid plot isn't anywhere near the standard of the last three installments.

For the first eight hours or so, the story goes nowhere and I felt like the writers were wasting my time. In fact, the plot was so dull and flat, I had considerable difficulty just staying awake when playing Last Specter at night. There were just too many conversations that held little value, too few comical moments, and even less action. As Sparky suggests, the "mystery" can hardly be called one, and when I reached the final scene of the game, I was genuinely surprised—I thought there'd be far more intrigue and excitement before credits rolled.

As far as the puzzles go, they were a mixed bag. On the one hand, I did appreciate that the developers have finally started to more closely integrate them (at times, anyway) with events that are happening in the story. When Layton needs to unlock a door, the next puzzle has to do with a locked door of some sort, and so on. That was something I thought the series should have been doing more of since the very first game, and although it's still not happening to the degree that I would like to see, it was noticeably present here.

On the other hand, the variety and quality of the puzzles felt lacking. There were a handful of problems that relied on visually detecting very small details, and on the DS screen I found it difficult to tell whether what I was seeing was important information, or a side effect of the picture being so small. Some puzzles ended up being nothing more than algebra problems, and a few times I ran into puzzle instructions that were frustratingly vague. I wouldn't generally say that English translation is a problem with the Layton series, but the difficulty in a puzzle should come from the challenge of the problem itself, not from a slight misstatement of what is being asked. It was also disappointing to find that whenever I encountered any one particular sort of puzzle, I could count on seeing it repeated with a slight twist at least two or three more times.

At this point, I feel some obligation to mention the London Life mode, ironically excluded from UK versions of the game. In a bizarre twist, it's a fetchquesty mini-RPG with similarities to Nintendo's Animal Crossing instead of being puzzle-oriented. Even more bizarre, the player creates their own character instead of assuming the role of Professor Layton. Ostensibly it's a "value-add" to give players more content to burn through, but I put a little over an hour into it and felt no pull to continue. Talking to townsfolk taken from the Layton series and decorating my room aren't things that I see as especially engaging, so I quit the mode quickly and didn't feel like I was missing much. It might have been worthwhile if it was some sort of RPG mystery similar to the main game, but instead comes off as an odd, ill-fitting inclusion.

With a poorly-paced, dishwater-dull story and a collection of puzzles which fail to inspire must-solve compulsion, it may be time for Level 5 to take a step back and re-evaluate what they're going to do with the next installment—and make no mistake, there will be more Layton games. With that in mind, my hope would be for the devs to take their time and recapture the energetic whimsy of previous mysteries. The puzzles could do with an infusion of cleverness, as well… after all, there are few things more disappointing than seeing a beloved franchise being run into the ground, and as far as I'm concerned, Professor Layton and Luke could still have a very bright future ahead of them if they can avoid the creativity-killing grind of yearly iteration. Rating: 6.0 out of 10.


Disclosures: This game was obtained via retail store and reviewed on the DS. Approximately 12 hours of play were devoted to the single-player mode, and the game was completed. There are no multiplayer modes.