I feel pretty… oh, so pretty… 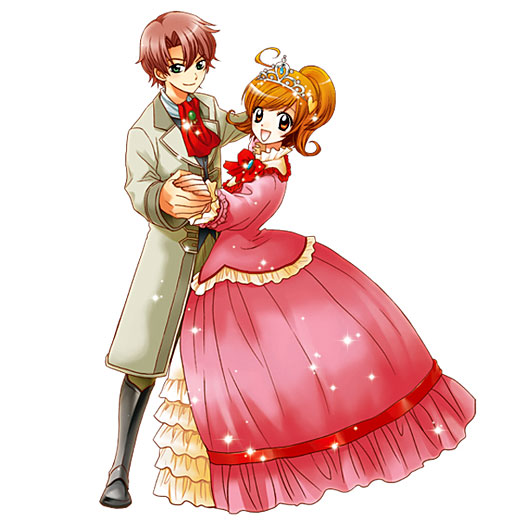 HIGH There is no other game quite like it.

LOW How long it takes to unlock new songs and dances.

WTF One of the first choices in the game is to change clothes or… transform?!?

An interesting and certainly unique title, I was quite glad to see Princess Debut come across my desk, if for no other reason than it's not every day I'm tasked with reviewing a dance game/dating sim penned from a female viewpoint. My horizons have certainly been broadened.

Aimed at younger female audiences, Princess Debut puts players in the role of Sabrina, an average girl hungry for adventure. Lucky for her, a portal to a parallel universe opens in her wardrobe and she agrees to trade places with the princess of the next dimension over. Once there, she discovers that she's got exactly 30 days to find a prince and learn how to dance for the royal ball in Saint-Lyon.

The formula of the game is quite simple; every day, Sabrina can travel to various locations and have conversations with people she meets. By answering correctly to questions and situations that arise over the course of play, she can gain a dance partner-slash-potential boyfriend or husband. After doing an event, she must practice her dancing and increase her skills. Conversations are illustrated in a bright, colorful style and progress through simple dialogue trees. The dancing segments ask players to trace patterns on the DS's touch screen while Sabrina and her chosen partner trip the light fantastic on the upper. 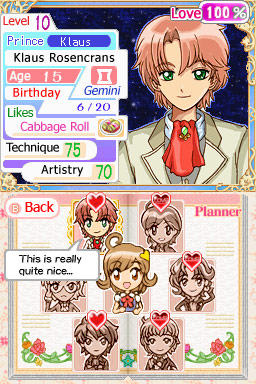 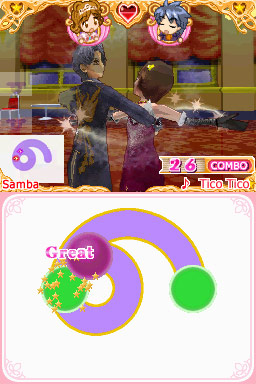 As a reviewer with a love for the fringe and offbeat, I give the game major points for simply existing. I can also appreciate that it's something different meant for the ever-increasing number of young, game-playing girls that just don't get enough quality software. Princess Debut isn't a bad game at all and I would imagine that players in its intended demographic would find it fairly interesting. I did too, but it became repetitive a little too quickly for my taste and the overall structure was too simplistic for me to bump it into "cult" status. The main problem is that it takes so long to unlock new songs and dances. Since the game forces you to dance at least once per day, the result is that it starts to feel a little like a grind (for no good reason, really) far too soon.

Something that wasn't necessarily a problem (but that I found somewhat disturbing, actually) is that of the six princes available to develop a relationship with, they all had weirdly dysfunctional personalities. As Sabrina, I wasn't exactly sure who I was supposed to be interested in… every guy acted like a jerk in one way or another, and though the prince I settled on seemed the most normal at first, he had a creepy sister fetish that I was a little skeeved out by. In my frustration at finding a likely match, I asked my wife if this was how it actually was in the dating process. Her response? "Welcome to being a woman."

I don't want to be too hard on the game, though. There were several times the dialogue and kooky happenings got me to chuckle, and regardless of what I had to put up with from the princes, things usually turned out just fine at the end. It's not very deep or complex, but then again, I don't think that it's supposed to be. Taken for what it is, Princess Debut is a great first entry into a style of game I'd love to see more of. Rating: 6.5 out of 10.

Disclosures: This game was obtained via publisher and reviewed on the DS. Approximately five hours of play were devoted to the single-player mode, and the game was completed 2 times. There are no multiplayer modes.

Parents: According to the ESRB, this game is appropriate for all ages. I'd have to agree. There is no violence, no questionable language, and no sexual situations… the naughtiest thing the princess ever engages in is a little hand-holding. Totally harmless stuff here, except for how jerky the princes can be at times.

Deaf & Hard of Hearing Gamers: You will actually find the game to be pretty playable, since the game provides ample on-screen cues during the dancing segments, and the conversation segments are all text-based. I'm not sure how appealing the game would be without the music since so much of it takes place on the dance floor, but at least it's accessible.

There isn’t any consequence; you’ll get partnered up with Tony, who is actually a prince. It will fill up the last 2 pages of the photo diary.

It’s funny how the game industry apparently assumes that young boys are interested in a wide variety of gaming activities (puzzle, RPG, FPS, RTS, turn-based war games, platformer, action adventures etc.) and that young girls only want to look nice, behave in presentable manner and find a suitable breadwinner to marry. Good thing we’re still living in the 19th century, otherwise the industry’s faithful adherence to gender stereotypes would have been downright embarrassing…

That’s funny, it never occurred to me to lose the game on purpose. I should go back and find out.

And yeah.. if there was a Prince version, i have a feeling it would be attacked as being stereotypical or anti-woman base dn how severely the guys in Princess are major wackjobs. = P

What’s the penalty if you don’t find a prince in 30 days?

Funny how the princess is considered in essence flawless and all the male suitors have major hang ups. Is that how women see themselves? I imagine Prince Debut would be all about putting up with all the nagging from the princesses. 😉