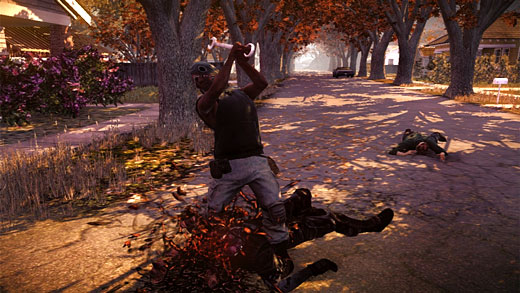 It's no secret that State of Decay from Undead Labs has been one of my favorite games this year.

Despite a lot of lackluster zombie-themed stuff overcrowding the market, these folks managed to bring an original vision and a brand-new twist to material that most people had already written off.

Now that the dust has settled and the game has been out for a while, I figured it was the perfect time to check back in and do a little (har har) post-mortem Q&A on this groundbreaking survival title. Answers provided by Sanya Weathers.

Hey guys, thanks so much for taking the time to chat.  To start off with, I'd like to know how have you felt about the game's reception since launch, and how successful has it been in relation to your original expectations? I mean, it's the fastest selling original Xbox Live Arcade (XBLA) title in history, and you've moved well over 500,000 copies!

We have been overwhelmed. We never imagined anything like this. We expected our game—our persistent world apocalypse simulator with permadeath, for crying out loud—would appeal very much to players like us, but not so much a mass audience.

We are very thankful for each player who personally spread the word about the game. Now we're trying to live up to the expectations everyone has.

It seems to have been quite a wild ride in terms of tweaks, additions  and patches since the game launched. Can you give a quick run-down of the major changes for players who haven't been following the update news?

Well, some things were simply fixes. Your community should never have been freaked out by infestations that were too far away to see, for example. And some things were in response to players doing things we hadn't managed, such as amassing a very large collection of survivors. We had to remove some unintended caps that had never been reached during testing.

We've made progress on making some visual optimization, in terms of screen tearing and glitching, as well.

The biggest change, as opposed to bug fix, was that we changed how resources (both human and material) are managed when you're offline. We wanted the offline progression to continue along the path that you set, but it was doing a little too realistic of a job. Survivors were getting killed and resources were being used at an incredible clip. Now, no one can be accidentally killed while out on a raid while you're offline (murder/suicides can still occur, though), and your survivors won't go insane building things without your permission.

All the fixes that are live to date are here and we're actively working on TU3 as of today! Preliminary notes are here. 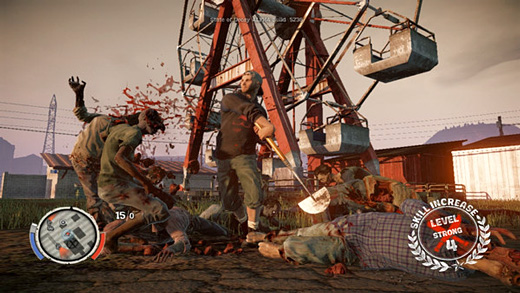 How much more work are you planning to do in terms of technical performance on 360, and will the PC version have features the 360 lacks?

To the former, there's not much more we can do at this time. There are simply some inherent technical issues that can't be addressed, although we never say never and will do our best, as always.

The PC version will take advantage of the PC's capabilities—enhanced graphics, higher resolution, improved framerate, and so on.

What was the most unexpected request or piece of feedback you got from the players after State of Decay launched?

To make it harder. We thought it was pretty hardcore already, and early reviews had people really struggling (albeit happily). But we have a sizable chunk of the community asking for one bite one kill mode, or harder special zombies, or weaker survivors.

We are doing our best to gratify their wishes with our upcoming sandbox mode.

What's been the funniest or strangest bug that's been reported or discovered?

Most of the bugs that are funny are visual in nature. Imagine a survivor crouching and then glitching through an elevated building, so all you see is the backpack like a shark fin. Or a pathing bug causing two zombies to get stuck in a bathroom in what looks like a compromising act.

One of the players sent in one with a truck upside down on top of a car and whizzing down the highway. We laugh at this stuff, same as everyone, even as we grit our teeth and try to fix it 🙂

See above about what we changed in terms of resources. Offline resource consumption was just deeply frustrating, especially to new players. It made people feel powerless, as if every play session was about playing catch-up and not just playing.

We also changed how frequently some of the automatic responses would occur. Yes, yes, brought a pony, GOT IT THANKS.

Nearly everything else has exceeded our wildest hopes. People seem to really enjoy being the story, instead of being told a story. Permadeath has been embraced. The simulation is appealing to everyone's inner sense of "what if." We're just thrilled at the way people are interacting with the world.

Now that the game has been put through single-player paces for a while, has the team changed its mind about the value of time progression when the console is off and players are away from the game?

Nope. Other than to tweak it to make it less punishing (since punishing was never the intent—we were not trying to build a game that you had to play every day), the offline progression is what makes the game into a simulation, one where you're a part of a living world and not a model builder. The element really sets State of Decay apart from other games.

Microsoft hasn't exactly been receiving a lot of love from smaller studios these days. How's your relationship been with them?

They believed in the game from the beginning, supported our plan, and stayed completely out of the creative process. They even gave us more time than originally scheduled in order to get more done. We appreciate everything they've done for us.

Any word on what's next for Undead Labs? Is the "Class 4" MMO still happening, or is the team starting to think about other projects?

We're in discussions about the future of the State of Decay universe, and if there's anything to announce, it'll be on our website before you can say "BLUARRRRRGH."

And we're always thinking about other projects. Never stop trying for more.

If you could say one sentence to people who haven't taken the State of Decay plunge yet, what would you say to convince them to give it a shot?

There's never been anything like our open world apocalypse simulator filled with awesome and zombies. Come be part of something new with us! Also, it's only twenty bucks on XBLA.

Okay, okay, I'm sorry but I just couldn't resist… this is the last question, I swear. Is there any way for you to know how many players have Marcus (the first character players get) survive until the end of the game? Basically, what's the Marcus death rate?

Hahahaha. You're not the only one who wants to know. We wanted an achievement for that, and couldn't squeeze it in, so… no idea.

Infinite thanks to Undead Labs and Sanya Weathers for making the time, and if you haven't checked State of Decay out yet… Do so! It'll be on my top ten of 2013 for sure, and probably yours, too.