The Return of the Orange and Blue 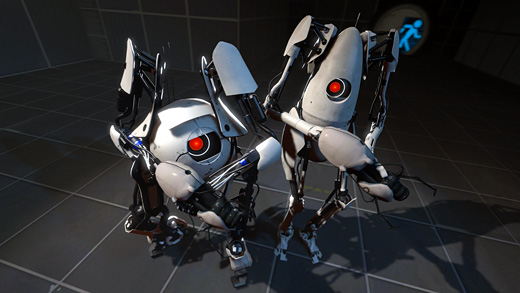 LOW The frustration from a particular puzzle at the end of the underground area.

WTF Who knew the turrets had such heavenly singing voices?

, I want to be clear about the fact that I enjoyed the game and found it to be a quality piece of work. It's certainly better than the majority of the drek I've seen in 2011, so please don't misunderstand me… I recognize and appreciate the kind of game it is.

Again, for emphasis: Portal 2 is a good title, no question about it.

However, flawless scores from numerous sites, including this one? Hearing it described as ‘better than perfect'? Seeing countless people equate playing the game to entering some sort of electronic ecstasy state? I think Richard (and much of the review sphere in general) are being a little too generous.

If you haven't already read Richard's main review, he does great job in covering the positives and we're basically in agreement on nearly everything, so I won't waste any time treading that same ground. Instead, I'll talk (mostly) about the areas where I felt Portal 2 could have been better.

My first and biggest complaint about the game is that it goes on for too long. While the first Portal was a fairly brief experience, that's not necessarily a bad thing. After all, it's often true that less is more—and I don't know about other people, but I'd much rather play a game that leaves me hungry rather than one that wears me down. I would have been happier if the game had ended at least three or four hours earlier than it did.

Part of my desire for the game to be trimmed is due to the fact that I had already played through the first adventure and was quite familiar with how portals work. The thrill of discovery just wasn't there, and much of that previous magic was because Portal was quite unlike anything players had seen before. The new puzzle tools are nice additions, but they're just minor adds to a repeat performance.

Another reason for wanting a shorter campaign was the mild form of disappointment I felt in seeing that Portal 2 retained the original title's general structure of test room after test room. The most exciting moments of Portal 2 for me were when I was able to break away from the strings of mental challenges and do something just a bit different.

The all-too-brief segments fleeing from danger or exploring the spaces between puzzles gave me all sorts of ideas about how the portals could be used in new ways, and I couldn't help but be a little dismayed that the bulk of playtime was essentially identical to what we've seen before. By the time I had passed the halfway point, I found that I needed to break up my sessions into no more than three or four puzzles per sitting to stave off burnout.

The silent protagonist/disembodied voice conceit that Valve seems so fond of is also feeling a little tired. There came a point very early in the game when I realized that there would not be any interaction with other characters, and that all I had to look forward to were empty test rooms and monologues peppered with the occasional bit of passively delivered environmental storytelling. While the writing and voice work here are genuinely witty, from a gameplay perspective, the predictability and lack of variation in the campaign (again) detracted from the experience.

Besides what I've already mentioned, there were a few other irritants like the frequent loading screens which broke up my sense of immersion, or the handful of puzzles where the all-important portal-able surfaces were hidden a little too far out of view, or in awkward places. Being stuck because I haven't figured out a puzzle is one thing, but being stuck because I'm not shooting a portal on exactly the right inch of wall is something else. These things were not major issues by any stretch of the imagination, but still, they're something to consider.

On the other hand, despite not agreeing with Richard's perfect 10, I certainly enjoyed many things about Portal 2.

Stephen Merchant's turn as newcomer AI Wheatley was a real treat, and there were a few showstopper moments that broke through the haze of test rooms. The addition of a co-op campaign was also appreciated, especially since split-screen was enabled. Playing with someone online is great, but there is a special joy to struggling through obstacles with a person sharing the same couch.

Also, Richard was certainly correct in that portals are just plain cool. Opening interconnected holes in space is a great mechanic, and certainly one of the most original ideas to come down the pike in quite some time. There's plenty of room for it to grow. (Oh, and by the way, the time for that growth is right now.)

As I stated at the beginning of this review, I don't dislike Portal 2—quite the opposite. I enjoyed much of my time with it, and I'm certainly glad that it exists. I would happily take a portal gun over yet another sci-fi rifle used to mow down hordes of gun-fodder enemies. At the same time, I'm not willing to jump on the bandwagon and proclaim Portal's return as some kind of unimpeachable gift from the heavens. By any standard Portal 2

is an above-average effort, but when all was said and done, I had to wonder whether this return trip to GLaDOS's lair was all it could have been. Rating: 8.0 out of 10.

As far as the story goes, Portal 2 is a completely unnecessary game. Portal was great. It was short, sweet, and aside from some mild attempts to shoehorn it into the half-life universe, it was self contained.

It didn’t need a sequel.

Any further backstory on GlaDOS and Aperture is probably going to diminish them.

That said, Portal 2 is pretty good. It might be an unnecessary sequel, but it’s fun and funny.

Thanks for pointing out those hard to find portal-able surfaces “puzzles”. I completely agree with you on that.

This almost sounds like he wanted to post a more negative review just for the sake of offsetting the previous positive one.

Complaining about the game being too long, and about loading screens… just did not sound legitimate to me. Also, keep in mind, this is a puzzle game, not sure why you would expect anything but test room after test room. Oh well.

Really don’t want to offend Richard, but this should be the main review for the game, and Richard’s as the “second opinion”.

Noooo Brad, it is a perfect game and you’re intentionally being contrary and lets all argue about the high score you gave it being not high enough rabble rabble rabble

Lol, just getting you ready.