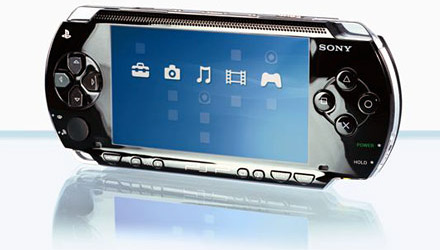 I finally got around to downloading my first title direct-to-PSP. Considering how smoothly it went, I'd have to say that Sony was completely smoking drugs when they decided to come up with the Go. Although I performed the process on one of the original UMD-compatible models, if it's even remotely analogous, then their new download-only handheld is sunk before it's even started.

I hadn't been online with my PlayStation Portable in quite some time, so the initial step in the process was to update my firmware. The first part was to simply download the update, but then I had to actually launch it and install. Drag.

Following that, I located the game that I wanted to get and began the download. To my utter surprise, the estimated time of download was something on the order of 115 minutes! To be fair, after a little while the estimate was reduced to 82 minutes, but still.

I left the PSP running while I went to go play something else, and when I came back to check, the connection had timed out and all of the progress had been lost. Time wasted. Totally frustrated by this point, I had to restart the download process and let it keep running. It was taking so long, actually had to stay up later than I wanted to make sure that it completed. Tired and bleary-eyed, my game was downloaded to my PSP's memory card nearly 3 hours after I began.

Wasn't this whole "get rid of hard-copy" thing supposed to have some benefits to it? It certainly wasn't any cheaper, and I could have driven to a store, picked up the game off the shelf, had a hot dog, driven home, and actually have been playing the game in less time and less hassle than it took to get through the download.

Brilliant system there, Sony. For the time being (and until all this crap gets a hell of a lot smoother and faster) I'm fine to stick with hard copies for anything bigger than an Arcade title.

I've talked about Weapon of Choice (XBLA) several times here and it's definitely a title that I greatly enjoyed.

If for some bizarre reason you still haven't played this nifty little title yet, the good people over at Mommy's Best Games drop me a line to announce that it's been recently reduced to a dirt-cheap 240 MS points ($3). The developers are practically giving it away here, folks. Snag yourself a copy and get to shootin' already.

That last comment was from me. I typed the spam blocker in the name section. I am still half asleep. lol

[quote=Brad Gallaway]Yeah, I heard that going to the PS3 first is faster, although DLing to my PS3 is hardly optimal. it often times out and is very slow to DL… at least 2x or 3x longer than it takes the 360 on the same connection. That aside, if the Go is using the same basic stuff as the original PSP and THIS is the kind of performance that can be expected, then Sony’s off their flippin’ rockers. [/quote] That is weird because downloading on my PS3 is the same as downloading on my Xbox 360 and I use WiFi on… Read more »

Yeah, I heard that going to the PS3 first is faster, although DLing to my PS3 is hardly optimal. it often times out and is very slow to DL… at least 2x or 3x longer than it takes the 360 on the same connection.

That aside, if the Go is using the same basic stuff as the original PSP and THIS is the kind of performance that can be expected, then Sony’s off their flippin’ rockers.

Abfackeln is right. I hate downloading games to the PSP directly, but PC or PS3 to PSP is a much quicker experience.

I think downloading the game onto your PS3 or PC and then transferring might help. I have done that with several PSone titles and it worked fine.

Doesn’t solve the problem for people that don’t have access to a PS3 or PC though.