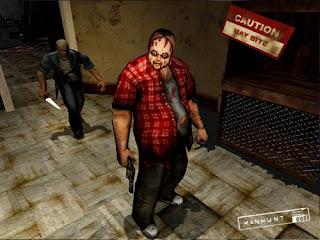 Finished Manhunt (PlayStation 2) today for the first time. It was an interesting experience. Although it certainly lives up to its reputation as being an extremely graphic and gory game, there was a lot more to it than just that… the story and setting (death-row convict is rescued from the chair only to be thrust into a kill-or-be-killed game of hide and seek) were engaging, and the work with tone and mood were excellent. The stark, brutal feel and incredibly bleak outlook of the game’s entire world were very well-realized. There's also quite a bit of meat to chew on for people who like to delve into meta-commentary, but I'll save that for another post.

The reason I ended up coming back to this came after so many years was that I feel a certain responsibility to experience games that are notable or important for one reason or another in order to expand my repertoire as a critic. Manhunt was certainly a title that should be examined, and I'm glad I gave it another shot. Once I got over the stupendously bad camera, the cumbersome, frustrating controls, and just accepted that the game was twice as long as it should be, there was a lot to like if for no other reason than very few games have attempted to explore the pitch-black subject matter.

I think the first Condemned game on the 360 is in the neighborhood, but Manhunt still outdoes it in terms of sheer nihilism and apathy towards humanity—it's not a place I'd like to live, but it's good to visit once in a while.

“Once I got over the stupendously bad camera, the cumbersome, frustrating controls…” Pretty much sums up exactly why I tend to avoid the ridiculously overrated games sporting the Rockstar tag. Every game they seem to make consists of extremely lackluster gameplay (especially combat… GTA is laughable compared to established third-person shooters) and hideous visuals. You’re probably correct about the game’s plot, characters and setting being unique and interesting, but honestly, as a game it just doesn’t hold enough merit to compete with the better games out there. The only reason this piece of garbage got any attention is due to… Read more »