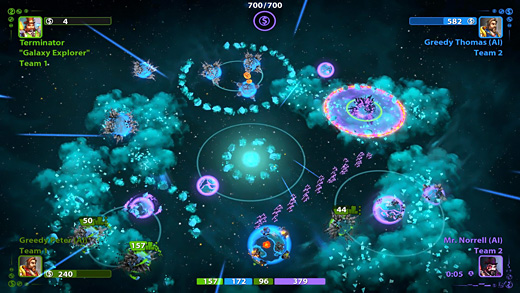 HIGH Taking out the second boss totally according to plan.

WTF Why are there no Robot or Insect campaigns?

There have been a number of low-visibility, no-PR releases on Microsoft's Xbox Live Arcade (XBLA) service recently, and it's been easy to overlook them. I have no idea what's behind this worrisome trend, but it's a shame because several have been quite good. One such title that's slipped under the radar is Planets Under Attack, from Russia's Targem Games.

At its core, Planets is a stripped-down, hyper-simplified real-time strategy (RTS) set in space. Each area of the game is a star system with various types of planets, some moving in orbit, and some stationary. The player usually begins each round with ownership of just one, and then must acquire more celestial real estate as soon as possible. These takeovers are done by dispatching ships from the planet(s) currently under control—each sphere is capable of generating a certain number, so each added planet equals a greater ability to attack overall.

Real-time strategy titles have traditionally struggled on home consoles for various reasons, primarily due to the difficulty of mapping complex mouse and keyboard controls to standard game pads. Planets avoids this pitfall by smartly trimming away everything except the basics, and it works superbly. Players craving deep micromanagement won't be satisfied, but depth doesn't automatically guarantee an enjoyable experience, and Planets is a perfect example.

It's a simple matter to become comfortable with building up friendly planets and taking over others, and this simplicity is aided by keeping each playfield limited to the size of the screen. There's nothing out of view to be concerned about, so there's no difficulty in controlling the camera. Likewise, the number of potential orders is very small; either attacking other planets or upgrading one currently held. As such, it's easy to map the controls to a pad and have buttons left over.

While Planets may sound too simple as I describe it, don't mistake this simplicity for a lack of challenge. After the first few levels, the player will find themselves fending off multiple factions at a time, or operating under various rules such as "control X planet for Y number of seconds" or "acquire target planets." There are even boss planets with special powers, and each area has three difficulty levels with new sub-objectives for completionists or those who crave replay.

After completing the story campaign, my only criticism is that three different races were shown (human, robot and insect) but only the humans were playable. The omission of the other races was especially puzzling because a tutorial outlines the differences between humans and robots, and I thought it reasonable to assume that they would be selectable later on. Strangely, the robots are limited to multiplayer, and as far as I can tell, the insects aren't selectable whatsoever. I hate to complain because the human-only campaign is satisfying and substantial, but it would have been interesting to play three shorter campaigns with race-specific mechanics.

Although I was disappointed that the other races weren't available in solo mode, I'm still happy to say that Planets Under Attack is exactly the sort of thing that I'm looking for when the mood for an XBLA (or PlayStation Network) title strikes me. It's different, it's solidly built on a smaller scale, and it delivers an easy-to-grasp, focused concept. It also earns praise for being a streamlined and problem-free RTS without falling into the pitfalls that have doomed so many others before it. That in itself is no mean feat, and Targem Games makes it look easy. Rating: 8.5 out of 10.


Disclosures: This game was obtained via publisher and reviewed on the Xbox 360. Approximately eight hours of play were devoted to the single-player mode, and the game was completed. No time was spent in multiplayer modes.

Parents: According to the ESRB, this game contains mild fantasy violence. There is no questionable language, no sexual content, and the only "violence" is seeing tiny little ships fly through space and land on other planets. As far as I'm concerned, this one is totally harmless.

Deaf & Hard of Hearing Gamers: All dialogue is presented with subtitles, and the only audio cue that had any significance during gameplay was a small "pinging" sound that would play when enemies are invading a player-held planet. There are visual cues showing these invasions, but the screen can sometimes be quite full of information, so players will have to keep a sharp eye out for the "SOS" messages that go out.