Going with the Flows 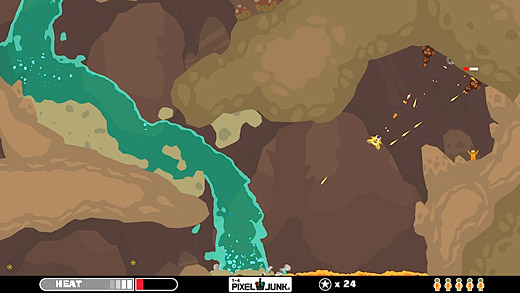 HIGH Neutralizing a pool of lava with one well-placed shot

LOW The ship can take hardly any damage at all.

WTF Why is collecting diamonds so important on a rescue mission?

PixelJunk Shooter, the latest title from PSN super-developer Q Games, is now available and proves to be a worthy successor to the PixelJunk name. Although each new project they create differs radically from the last, it's not hard to see that the already-high quality the studio is known for is increased with each new release.

Leaving race cars, Tower Defense, and pollen-gathering bugs behind, PixelJunk Shooter puts the player in control of a small spacecraft that must navigate through an underground cave system. There are diamonds to be found and people in need of rescue, but the real hook to the game is the fluid physics engine.

Each level is a puzzle unto itself, but rather than trying to find the correct path or locating a lost key, successful completion usually depends on figuring out the way various liquid substances will react. For example, hot lava often needs to be channeled away from places where lost miners are stranded. If the ground beneath it can't be blasted away to create drainage, then the player will likely have to funnel some cold water from elsewhere in the level in order to cool it off. As the game progresses, other substances come into to play; things like dangerously magnetic sludge and flammable clouds of smoke. Q Games have done a great job incorporating these fluid elements and crafted this 2D "shooter" to be as much about the brain as it is about the trigger finger, if not more so.

Although PixelJunk Shooter's quality and care in design are equal to or better than previous PixelJunk games, the place where Shooter diverges from its brethren is in running time. With only three "worlds" to get through, the game is over in just a few hours. However, I don't see that as a bad thing. I always prefer a game that's short, sweet, and to the point rather than something that goes on and on for the sake of boasting a lengthy playtime. Each level here feels like a unique challenge, and the game never fails to provide interesting situations and enough variety to keep the overall experience feeling fresh from start to finish. It may be short, but it satisfies.

(P.S. For players who absolutely can't get enough, the end of the game basically screams that there will be DLC additions later on, so there's that to look forward to.)

If I have any complaints about the game at all, it's that I wouldn't have minded a level or two that was more focused on combat. The game's pace, in general, is quite leisurely and easygoing. A little bit of stress now and again would've been a nice variation. Besides that, it's incredibly easy to accidentally shoot someone that's meant to be rescued, but the levels are so short that it's hardly even a bother to restart (and not necessary unless the player wants perfection). Both of those things are little more than nitpicks, though.

PixelJunk Shooter is one of those instantly-intuitive games that only takes a minute before completely clicking with the player—once the controller is in hand, everything makes sense and flows effortlessly. (Pun intended.) A lot of dev teams struggle greatly to capture that element of accessibility and fail, but Q Games nails it dead-on. Elegant, clever, and attractive, I have a hard time imagining anyone not liking this title. Chalk up one more win or for PSN. Rating: 8.0 out of 10.

Disclosures: This game was obtained via paid download and reviewed on the PS3. Approximately four hours of play were devoted to the single-player mode, and the game was completed. No time was spent in multiplayer modes.

Parents: Nothing to worry about here. The only kind of  "violence" that occurs is shooting bats or various squidgy monsters with bullets or missiles. There's no gore and it's not graphic in the least. There is no questionable language or sexual content. It's kid-safe!

Deaf & Hard of Hearing: You shouldn't have any problems with the game. Although some enemies do give auditory signals before attacking, everything is clearly on-screen and able to be seen with no difficulty. There is no spoken dialogue, and all messages are delivered through text.

This is mostly synopsis, not analysis. The only real paragraph of any reader value is the fifth, where you note that you would have preferred some “stress” levels. But you don’t really explain this feeling. Why would you prefer this? Why did the game make you feel leisurely? A leisurely, easygoing shooter sounds incredibly unique, and expressing why PJ Shooter is such would be a far more interesting read.