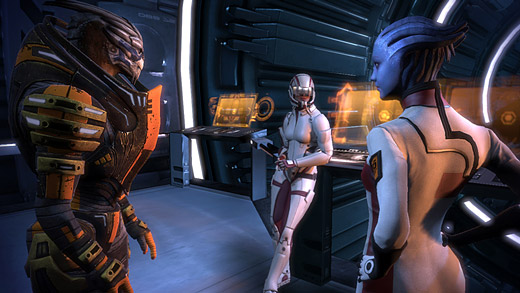 So, out of my ten-year career reviewing games professionally, I've only awarded two perfect "10" scores. I'm no math whiz, but if you average that out, I'm pretty sure that's one for every five years. My gist? I don't hand them out lightly.

One of the games to which I gave top marks was BioWare's Mass Effect. Encapsulating basically everything I love about videogames, action, and sci-fi all in one complete package, I blew through the game and devoured every last tasty morsel. Couldn't get enough. Although it's true all good things come to an end, thanks to the implementation of DLC, good things can keep going for a little longer. More Mass Effect? Yes, please.

The first piece of DLC, Bring Down the Sky, was short and felt a little cobbled together, but it was basically another chunk of what I was looking for. A few quick missions, some dialogue and choices to make, and another opportunity to put my own Comander Shepard through her paces. It wasn't mindblowing, but it was good enough. Besides, BioWare had promised at least two pieces of DLC before the launch of Mass Effect 2. I still had (minimum) one more to look forward to, and surely, that one would be a home run, right?

After months of total silence on the final add-on, it appeared on Xbox Live today with absolutely no fanfare or forewarning. Catching me completely by surprise, I drove home at the first opportunity, breathlessly queued it up for download, and was… absolutely disappointed.

Titled Pinnacle Station, the new content is a tiny base that Shepard can enter. There are no new alien races that I noticed, no moral choices, or even any quests to undertake. No tasks, no jobs, no missions… essentially, Pinnacle Station is a bunch of combat-driven time trials that players can enter and attempt to rank on a leaderboard. That's it.

Although there are four or five types of trials, they all boil down to being something that feels completely out of place and inappropriate for a story-driven RPG like Mass Effect. Time trials? Really? After all these months of waiting and looking forward to getting back into one of what I consider one of the best games of the last decade, the best BioWare came up with was time trials?

Adding insult to injury, the content is quite buggy. At one point, my character became unable to move and I was basically reduced to an immobile gun turret. At another, the game simply froze. The framerate itself is somewhat choppy, as well. I put around fifteen or twenty minutes into the game, and then shut it off in disgust.

I think it's pretty clear that I hold Mass Effect in the highest possible regard, having nothing but the utmost respect and affection for it, but I need to be honest when I say that Pinnacle Station is not only a complete waste of money, it's an insult to Mass Effect itself. I can't imagine why this shoddy cash-in was even released at all, except for a quick infusion of income from all the suckers like me who bought it on faith. Honestly, I'd have much rather BioWare not released it at all, or at the very least, been more straightforward and open with regard to what the content was.