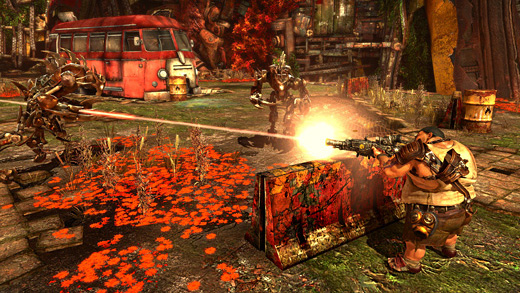 This has been a really crazy week, and that had nothing at all to do with Thanksgiving. Between Seattle's recent snowfall wreaking havoc with my work schedule and taking a mini-vacation from games, it's safe to say that I'm pretty far out of my groove at the moment. As such, I'm going to cop out on doing a full-on blog entry while I take care of other things. In the meantime, here's a few bits to chew on…

The first thing I played after formally ending my hiatus from games was the Pigsy's Perfect 10 DLC for Enslaved: Odyssey to the West

. I don't want to say too much about it since I'm considering doing a quick review for it, but what I will say is that it was excellent from start to finish.

In a nutshell, greasy mech-mechanic Pigsy decides that he needs to build himself a robot companion since life in the junkyard is a little too quiet. Along the way to his goal, players will focus on minor stealth gameplay with a lot of sniping. He also uses his mechanical hand as a grappling hook, and can employ different types of supplemental gear other than what female lead Trip previously used.

Perfect 10 was exactly the sort of DLC that I love the most—it built on a character and his story from Enslaved's campaign, but the gameplay was radically different and the adventure was not meant to fit between levels, nor was it any sort of retcon. Personally, I found it to be totally worth the price of admission and would recommend it to anyone who enjoyed Enslaved even a bit.

Just a quick word on the recent XBLI release, The Deep Cave. It's a pretty high-quality title reminiscent of Super Meat Boy or VVVVVV. The graphics are nice and the music is actually fantastic. However, I have to be honest in saying that it's hard to go back to this sort of hyper-demanding, ultra-lethal platformer since Team Meat pretty much did it perfectly.

The lack of "weight" in Deep Cave feels weird, and I found it quite difficult to adjust to the jumping. The controls don't feel as accurate as SMB's for some reason, either. I bailed on it pretty quick myself since I'm just not in the right frame of mind to play something like this right now, but if you want another F-The-Player-And-Kill-Him/Her-A-Million-Times-With-Irritating-Deaths game, this is one to check out.

Here's a few links to some random things.

The latest GameCritics podcast is now available for your downloading pleasure. Episode 44 features Mike Bracken's second look at Alan Wake, my extended thoughts on Metal Gear Solid: Peace Walker, Richard Naik's alcohol-tinged review of Amnesia: the Dark Descent, and we also talk about about why large open-world games don't get a pass when it comes to bug testing.

Atlus has just announced a new Nintendo DS title called Radiant Historia. Looks pretty interesting to me, but see for yourself.

This one is totally random, but the folks over at OnlineDegree.net have a fairly accurate (and fairly humorous) breakdown of the different sorts of people you encounter on Xbox Live. I don't know why this particular site is hosting this particular list, but it seems dead-on to me. Scroll down a little past the gospel singers. Yes, really.