Old Friends Return in a Most Unexpected Fashion 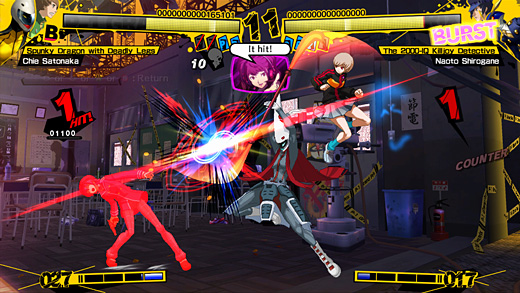 LOW The white story text can sometimes be hard to read.

WTF I forgot how much I missed these characters until Arena reminded me.

I'm going to be totally honest here… I wasn't quite sure what to expect from Persona 4: Arena

, but whatever it ended up being, I was ready for it to be bad.

I mean, what else was I supposed to think when hearing that one of my favorite games of all time was receiving a quasi-sequel that wasn't even in the same genre? Even worse, not only did a Japanese role-playing game (JRPG) get turned into a fighting game, the characters squaring off in it were close-knit teammates that I spent over a hundred hours building relationships with! And even worse than that? The project would be co-developed by a company whose games I wasn't fond of in the first place!

The pieces just didn't fit together in my mind, and how this game could have been anything other than a tangentially-related oddity at best (and an embarrassing disaster at worst) I had no idea. Fortunately, both Atlus and Arc System Works proved me completely and utterly wrong—and halleleujah for that. Persona 4: Arena is fantastic.

So, exactly what is it? Good question.

While initial impressions would suggest that it's nothing more than a standard 2D fighter starring characters from JRPGs Persona 3 and Persona 4, the truth is that Arena is nothing less than a legitimate continuation of 4's story, much the same as FES was for 3. While saying this may make no sense at first, the connections are revealed in the hefty story mode. 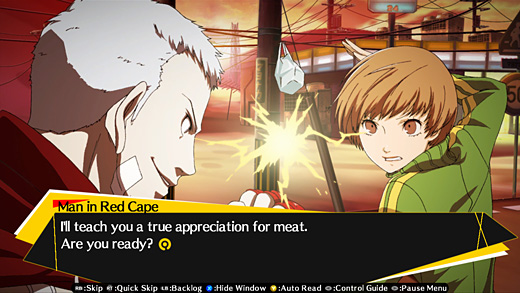 Upon starting this mode, the player can choose between a starting group of four characters. Each one offers a substantial amount of story told largely through text and voiceovers. However, unlike most fighting games, Arena will only let players progress to a certain point. After seeing a big chunk of the plot, players will unlock a second tier of characters, and by choosing one of these new faces, the next chunk unfolds. After this second tier there is a third which offers enormous revelations, and after that, there's still more.

Frankly, this was a brilliant spin on the traditional method of "storytelling" in fighting games, and ends up delivering a deep, multi-perspective Rashomon-style tale that manages to to connect Persona 3 and Persona 4 (previously unrelated) while offering new information that will be cherished by anyone who calls themselves a fan of either game. Not only that, it pulls off the neat trick of explaining why characters who would give their lives for their friends come to fight each other, tournament-style. Never in a million years would I have imagined this spinoff to be such an essential part of the overall Persona canon, but it most certainly is.

Now that I've established how relevant Persona 4: Arena will be to the series fans (like myself) who doubted it, what about the fighting itself? It's pretty damned good. While I can't say that I've ever been a fan of Arc System Works' BlazBlue, the fisticuffs on tap here are satisfying.

To begin with, the game offers a clear tutorial and an excellent challenge mode, both of which give the player ample opportunity to learn the mechanics. More developers would be wise to follow this example. Once past, the system is revealed to be fairly straightforward in that there aren't loads of arcane button combinations to memorize. Although each character has their own moves and handles slightly differently, they all draw from the same basic set of quarter-circle and multiple-button-press movements. 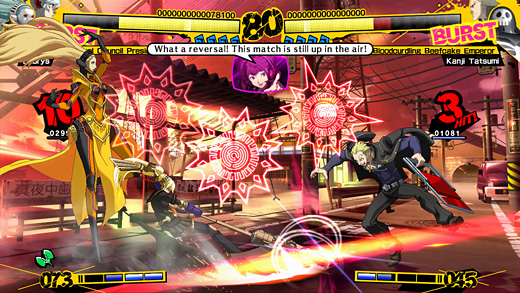 While it's possible to get overwhelmed with all of the various attacks, cancels, and super moves, jumping into the fighting at sub-tournament levels is simple enough, and watching all of these familiar faces summon their trademark Personas during battle is great. There's no shortage of flashy maneuvers, and the production values are top-notch. Since Arena is co-produced by Arc Systems and Atlus itself, the characters look and sound exactly like they should, the animation is attractively smooth, and I am hard-pressed to think of a series that offers better music.

Persona 4: Arena is a class act across the board, and there are precious few things to complain about. However, I do think it's worth noting that since the game offers so much story via text, I found it odd that white lettering was chosen—it's sometimes hard to read when superimposed upon lighter backgrounds. Also, it's clear that certain moves are meant to be performed with a fighting stick—pushing three face buttons at the same time is no easy task, and I had difficulty producing double quarter-circles reliably. It's not a huge handicap in general, but those wanting to take their game higher will definitely need a stick if they don't already own one.

Apart from that, the only other thing worth mentioning is that since the story mode is so substantial, players who aren't already familiar with events from the previous games will likely find themselves drowning in confusion. The developers make efforts to explain things, but it would be impossible to condense 200 hours of role-playing into something that would totally satisfy newcomers. I may be stating the obvious, but players who've already journeyed with SEES and the Inaba Investigation Team will certainly get more out of the game than those who haven't.

As a critic for many years, I'd like to think that I've developed a reliable sense of intuition when it comes to which games will be worth checking out, and which won't. It rarely fails me, although I will admit that there are occasional misfires—Persona 4: Arena

is one such occasion where my spider sense was completely off the mark. In this case, I'm extremely glad that it was. Not only was I treated to a fine fighting game worth playing, but I got the chance to spend more time with beloved characters who I never guessed I'd ever be revisiting. My compliments to both Atlus and Arc System Works for producing a superb game that far exceeded my expectations. Rating: 9.0 out of 10.

Parents: According to the ESRB, this game contains language, mild blood, suggestive themes, use of tobacco, and violence. The Persona series has always been aimed at older players, and this installment is no different. While the fighting game formula is much simpler than the traditional JRPG gameplay, the dialogue, themes, and content is more suitable for those players teenaged and above. It's not hardcore stuff by any means, but there is a fair amount of salty language and some of the situations can be quite emotional. Although I wouldn't be embarrassed playing this if my children walked into the room, I think I would probably wait until they were more mature before letting them play through this, or any other Persona game.

Deaf & Hard of Hearing Gamers: You won't have any problems. All dialogue is subtitled during cutscenes, and since this is a fighting game, audio cues don't play a significant role. In my view, it's totally accessible.

Hey Dreimos! It’s is hard to say because each character in story mode gives a different part of the story overall… I only finished the game with 4 or 5 of them before I needed to move onto the next game, and the story mode takes a good long while to get through. It’s far longer than the average fighting game “story mode”. From what I saw, the actual ending events of P4 aren’t necessarily spoiled (they don’t reveal the identity of P4’s villain, for instance) but Arena certainly assumes players to have already been through P3/P4. they make an… Read more »

I purchased this today and was about to open it and play until I read, “…Arena is nothing less than a legitimate continuation of 4’s story…”

Here’s my dilemma: I never finished P4, and I still plan to! Does the story mode in P4A spoil whatever happens at the end of P4?? If it does, let me know! I’ll just avoid this game until I get P4Golden on Vita this fall.

Nice review Brad. I was expecting to basically not acknowledge this game’s existence due to the genre, however, since the narrative from P3/4 continues in P4: Arena I was kinda hoping it would be semi-decent. It’s great to discover – through your review – that the game is great, especially more so since, like you, I’m not overly keen on hardcore Beat ‘Em fighters either, so to know you love it is great for me.