While I usually handle most of the reporting for PAX Prime, this time I enlisted Steven Brown to help me cover the floor. If the name sounds familiar, you might know him from twitter as @CapitalistPig21. He's also a frequent contributor to @Gamecritics.

Now, on to the coverage! 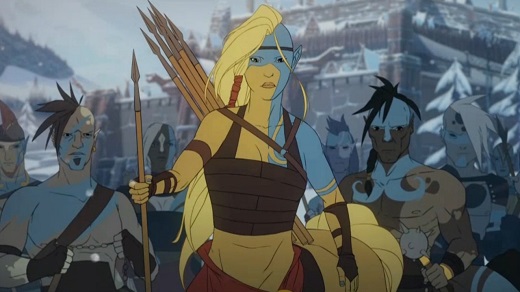 The Banner Saga 2 The sequel to Stoic's excellent strategy RPG/Oregon Trail hybrid looks just as gorgeous as its predecessor.  Resuming a few weeks after the end of the first, The Banner Saga 2 will carry over all of the decisions made in the previous game if you still have your save file. Considering that the lead protagonist will differ depending on who survived, I'm interested in seeing how dramatically the plot will change to accommodate that.  Mechanically, it looks very similar to The Banner Saga, with some extra classes and more interactivity with the maps.  As a big fan of the first, I couldn't be happier with what I saw. SB 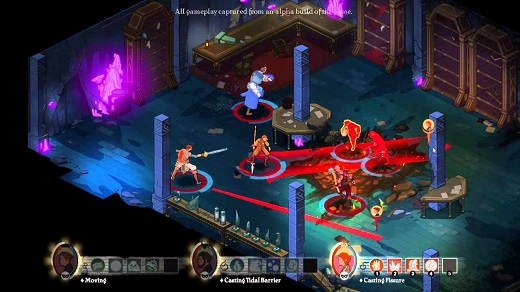 Masquerada: Songs and Shadows While the art style looks quite a bit like The Banner Saga, Masquerada plays completely differently.  This fully-voiced isometric RPG put me in direct control of three characters at once.  Pausing during combat is mandatory, since the game is incredibly difficult without taking the time to set up the proper order of attacks.  In fact, since each character has a small set of skills with long cooldowns, not unlike a MOBA, it's essential to pause in order to survive. SB 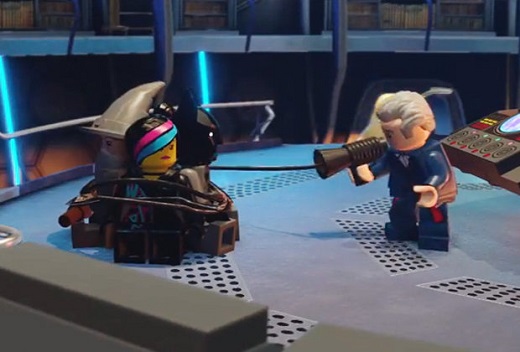 Lego Dimensions Lego seems to be going all-out on this one, aiming directly at grown-ups with nostalgia. I mean, I'm sure the kids will enjoy playing it, but the properties I saw on display were Back to the Future, Doctor Who, The Wizard of Oz, and Portal (among others) and as a parent, I feel pretty comfortable in saying that those aren't hot with little kids these days. The gameplay seem split in two flavors: story missions with traditional Lego-style puzzles, and the more open, do-your-own-thing levels that less structured. I'm a bit burned out on Lego at the moment so the gameplay wasn't anything that interested me greatly, although I will say that I admired all of the small touches that the devs put into each character. For example, when transforming into the first Doctor in the Doctor Who playset, the inside of the TARDIS changes appearance and turns black and white. Similarly, one of Scooby Doo's special powers is the ability to disguise himself as a southern belle, just like he did in some of the cartoons. The developers are clearly doing their deep-cut homework here. BG 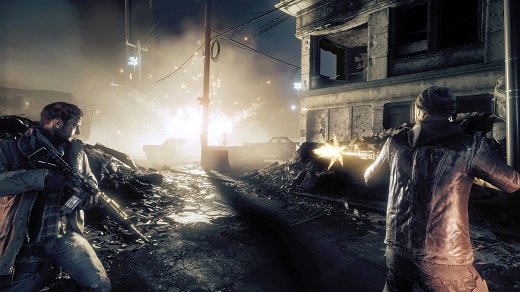 Homefront: The Revolution I went into this one pretty jaded. What I saw from E3 didn't look promising, and the specter of mediocrity from the first installment hovers over the entire franchise.  Those concerns were lifted after getting my hands on the demo for the first time, though. The open-world gameplay can quickly devolve into enjoyable chaos as resistance forces will clash with KPA occupiers across the ruined outskirts of a city.  These dynamic encounters are completely optional to join in, and in fact, more than once I used the conflicts to draw attention away from my own objectives.  Sure, the resistance I use as diversions would get wiped out, but that's a small price to pay for freedom.  While my time with Homefront didn't push it into must-play status yet, its showing here at PAX definitely raised my opinion on it. SB 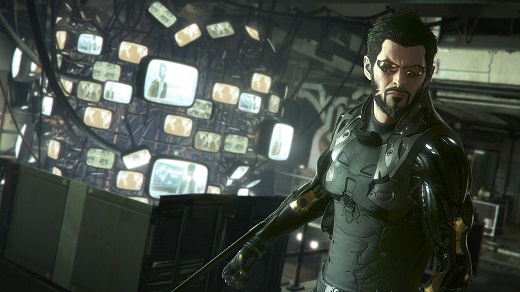 Deus Ex: Mankind Divided I fully admit to being a Deus Ex fanboy, and have loved the series since the first.  Human Revolution was easily in my top five games when it released, and I've been eagerly awaiting a sequel.  The hands-off demo I was shown only increased my desire for it. The developers are stressing verticality in the environments this time, and one of the newer tools given to help traverse them is an augment called the Icarus Strike.  If you can picture the blink ability from Dishonored, you wouldn't be too far off from how it works.  That's just one new tweak among others, but the key thing here is that everything that made HR so great looks to have been carried over. SB 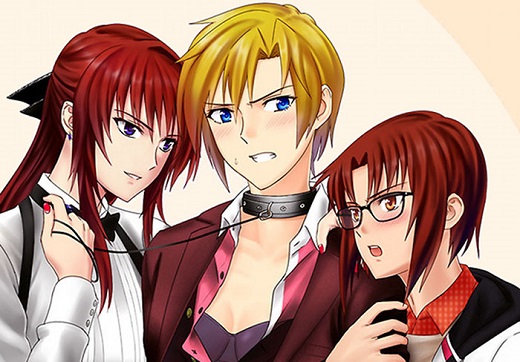 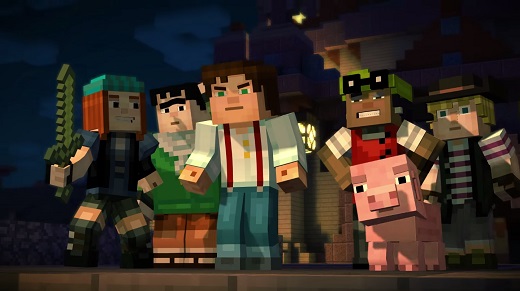 Minecraft: Story Mode From the demo I saw, this is definitely A Telltale Game. If you've played any of their recent efforts, you can pretty much know what to expect, although the difference being that this is taking one of the biggest non-narrative IPs in the world and giving it both story and characters. It was quite cute and charming, and as someone who has dabbled in Minecraft, it was pretty interesting to see what they've done with it. There are now more action-oriented QTEs, and I was told that some of the main tonal influences are The Goonies and Ghostbusters; they're going after exciting, thrilling experiences, but definitely keeping it funny and approachable for kids. BG 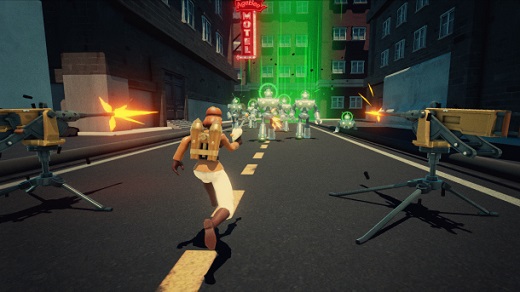 Fortified This game looked pretty early, but I like the "active" tower defense genre and it actually reminded me a bit of Iron Brigade — coming from me, that's quite a compliment. The 50s sci-fi feel was nice, and the ideas on display were solid. Looking forward to seeing this one in a more-completed state. BG

Super Dungeon Bros If you and three friends are ever bored on a couch, I would suggest taking a look at this four-player co-op rock-and-roll themed dungeon crawler that throws in a few roguelike elements to keep things fresh.  However, I would recommend only playing with friends as the potential for griefing is high.  Shared lives, the ability to throw your companions (either to solve puzzles or toss them to their deaths), and a difficulty that increases with time mandate cooperation.  Oh, and each character is a different class with different skills, so be sure to discuss who enjoys being the DPS and who likes to tank beforehand. SB 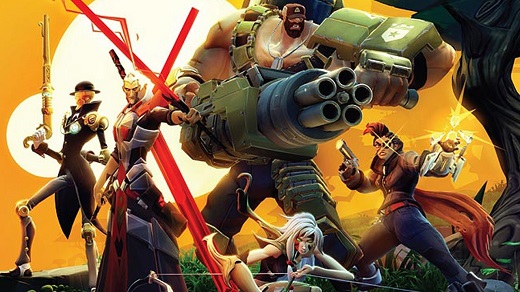 Battleborn It's easy to dismiss Battleborn as an arena shooter version of Borderlands at first glance, but that would be a mistake.  While the self-styled "hero shooter" is focused on adversarial play, 2K showed off what the five-player cooperative campaign would be like, and it was a blast taking down hordes of enemies while escorting a large spider-wolf tank.  Plus, I got to play as the most dapper robot butler I have ever seen, so that's a plus.  The full roster of 25 wasn't unlocked for the demo, but the characters that were available to play were radically varied, from long-range support to close-up melee.  It wouldn't be much of a stretch to consider this an FPS version of League of Legends, just without the towers and minions. SB 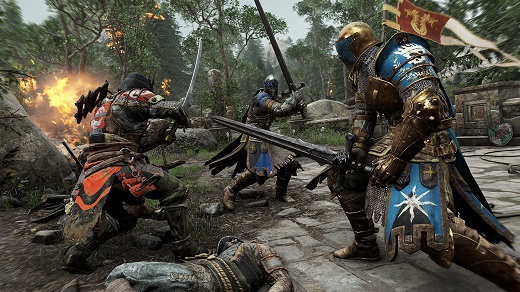 For Honor I didn't know much about this one going into it, but it ended up being one of my favorites at the show despite the uber-generic title. Essentially, it's a squad-based game where groups of samurai, vikings, or knights go out and wage war with each other. In the demo players had to control three points on a map. This in itself wasn't anything special, but it was the controls and level of lethality that absolutely made the game. I quickly discovered that the right stick controls the character's stance, positioning the sword in up, left, or right positions. If your block matches the direction your enemy's attack is coming, their attack is halted, and it gives you an opening to strike back. If you guard wrong, you take the hit. It's a lot more dynamic and heart-stopping than it sounds because the pace is quick, and it's not always the easiest thing to tell which stance your enemy's in. However, the other thing cranking this title up a notch is that it's heavily focused on team play, so while one-on-one odds make for tense matches, the moment it becomes two-on-one, it's time to run — guarding against one person will inevitably leave you open against the other. I expected absolutely nothing from For Honor when I started, but I was totally impressed by how exciting and intense it felt. Also, heads up that there is a solo mode and a campaign, so it's not a multiplayer-only experience. BG 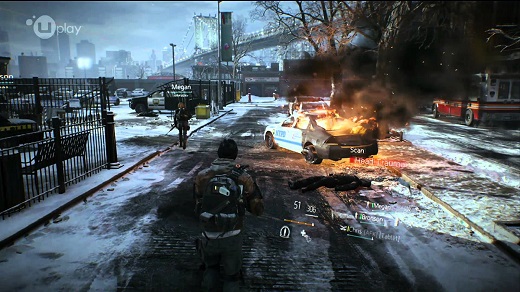 The Division This second game from Ubisoft has a lot in common with For Honor, in the sense that team play is integral. The difference is that it ditches all of the medieval trappings, and instead sets itself in a run-down city abandoned by authorities and taken over by small groups of soldiers. In the demo, players had to take control of an extraction point, and keep control of it for a certain amount of time before a helicopter arrived. It was a lot harder than it sounds, because once one player secured the site, they immediately became a target for the other teams in the area, all controlled by real people. Lone-wolfing it here is a quick way to get killed, and players definitely need to cover each other's backs. It was a little weird that there was no crouching or melee, but hopefully that will be addressed before the game launches. As someone who's recently become way more interested in team play, this one was looking promising.

Ubisoft SIDE NOTE: Both For Honor and The Division had female characters available from the start, and none of them were dressed in boob-centric robes or metal bikinis. In fact, it was nearly impossible to tell the gender of a character at first glance because both sexes were wearing protective, functional armor. Seems like Ubisoft's come a long way from their former claim that women were too much work to animate… I'm glad they dropped the bullshit. Good on them!

That's it for day two. Come back for day three tomorrow!