Welcome to the third (and final) installment of Gamecritics at PAX Prime 2015!

While the show's still going on for a fourth day, we have to pack our bags a bit early and wrap up. That said, we managed to get time with nearly everything we wanted to see, and we're proud to present this last group of games that are worthy of your attention.

Also, special thanks go out to Steven Brown (AKA @CapitalistPig21) who was top-class freelancer support in covering the show.  They don't come any better!

Now, on to the coverage… 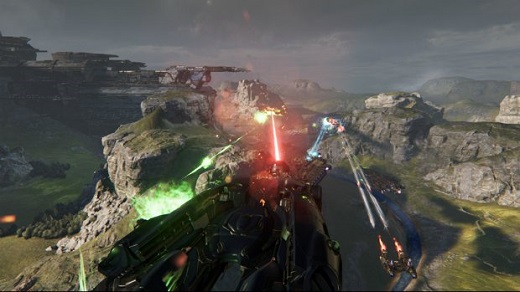 Dreadnought While a lot of other kids wanted to pilot an X-Wing, I wanted to command a Star Destroyer, and the devs at Yager finally gave me that chance with Dreadnought. This 5 vs. 5 combat game lets you take control of massive, lumbering capitol ships and duke it out against the opposing fleet. These leviathans are not the graceful fighters found in most space sim games — the eponymous dreadnoughts are as slow as would be expected from ships of their size, so positioning is key. The absolute last thing you want is to be caught open amidships as a heavy battlecruiser burns you from stem to stern. Players can choose between one of several classes of ships, ranging from fully offensive, to defense and support. While the games I played ended up turning into chaotic free-for-alls, dealing with ships of this size requires coordination, lest you find yourself surrounded with no way out of the noose. If you've always wanted to know what it's like to command Home One or the Executor, then Dreadnought is for you. SB 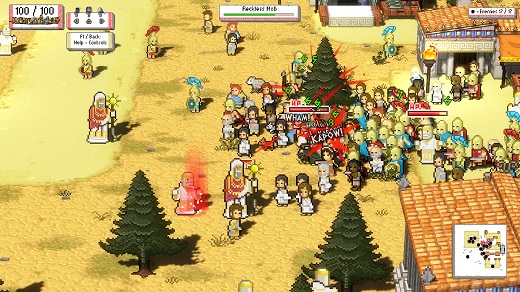 Okhlos Reason through mob rule — that's the general idea behind Okhlos. Filling the role of a philosopher in ancient Greece, I had to gather up a group of followers and strike down the gods and their worshipers. Much like in Pikmin or Overlord, my followers did most of the grunt work for me. They would fight my battles, protect me from harm, and eventually bring down the gods. Of course, I had to protect my flock from themselves, making sure they wouldn't eat poisoned food and telling them when to block. In turn, they would die for me, protecting me with their lives as I spread the truth of reason throughout Greece.  SB 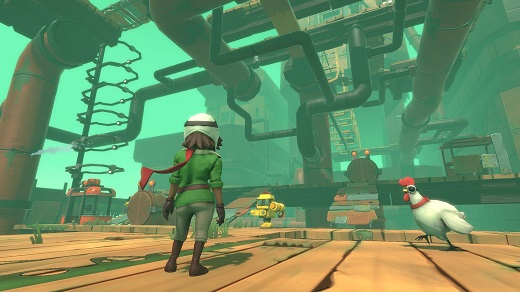 Wayward Sky I visited the good people at Uber entertainment, and they had VR on display, both Valve/HTC's Vive and PS4's Morpheus. The Vive was just running a demo featuring some of the assets from Planetary, but the Morpheus was running Wayward Sky, a launch title for Sony's headset. The first thing that I noticed was that I wasn't getting sick in the headset, even a bit. My last experience with VR (an early Oculus) left me nauseous and with a splitting headache, but I was totally fine this time. According to the devs, they're developing a lot of tricks to stave off VR-induced illness, a lot of it being directorial choices. As for the game itself, it's a supercute "Point and Go" game that's mostly shown from a third-person perspective, except for a few sections where it dips into first-person in order to push a button or pull a switch. The Morpheus was definitely not as powerful or as convincing as the Vive, but considering that it was running on the PS4 and not a cutting-edge PC, it was an impressive display. BG 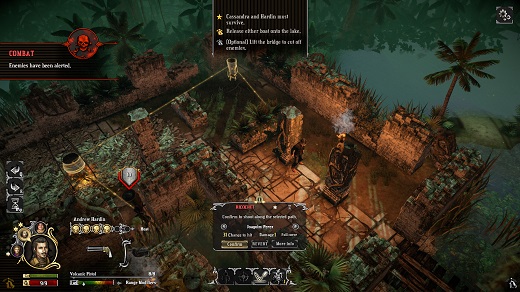 Hard West I cannot wait for the full release of this X-COM-meets-Deadlands turn-based strategy game later this year. For those not familiar with the term "Weird West", just picture watching a version of the film Tombstone set in the Cthulhu mythos and you'll have an idea of what it means. As a lover of that concept and of strategy games, Hard West struck all the right tones with me. Avoiding being in the open, proper scouting, and careful use of your skills are mandatory to survive. Make no mistake, Hard West is, well… hard. Those looking for a difficult turn based strategy game set in a world that's not often visited should take note. SB 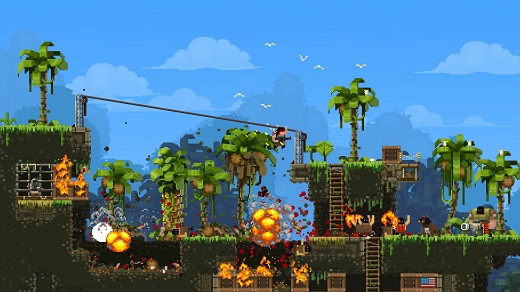 Broforce You can't run from freedom. Broforce is a frantic 4-player co-op shooter. Levels are fast and chaotic, filled with bombs, bullets, and bros. The game lends itself well to quick plays as I never spent more than three minutes per level. Death can come swiftly as only one shot is enough to put down a bro, but there are always several more waiting to fight for the American way. Each bro controls differently and brings their own style to the game. The Brocketeer has a jump pack to traverse levels more easily, while the Bro in Black has a super-charged gun to blast the enemies of freedom. Rambro, The Brodock Sains, Mr. Broderson, Bro Norris, The Broxpendables… the list of those willing to liberate the world is never-ending. Also, everything in the game is fully destructible except for the American flag and the ground upon which it rests. Not that you would think about doing that… Commie. SB 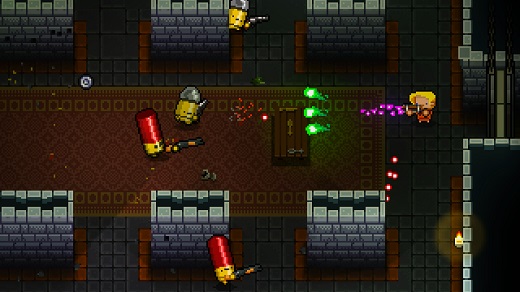 Enter the Gungeon This gun-focused roguelike is one of my favorite games from this year's PAX, despite sounding semi-ludicrous in explanations. You pick one of a handful of characters to travel into the gungeon, fight off wave after wave of walking bullets, dancing guns, and sentient turrets, all to make your way to the bottom to find the gun that will kill… your past. Chock-full of reference humor lifted from several games and action movies, Enter the Gungeon had me smiling from the get go. The gameplay is tight and felt natural as I flipped tables for cover and dove out of the way of incoming bullets. While the first few floors could be considered "easy", the difficulty quickly spirals out of control, with enemies shooting out so fast that the game turns into a "bullet-hell" style shooter. I loved it. SB 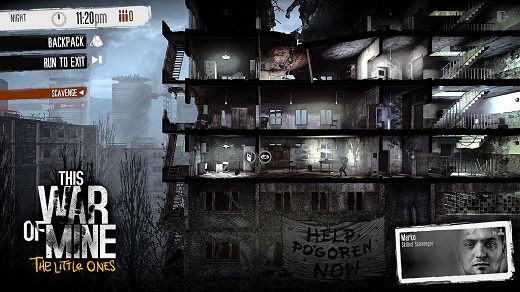 This War of Mine: The Little Ones How can you make a game that was one of the most realistic depictions of war in the past few years even more depressing? You add kids to the equation. This War of Mine: The Little Ones is an expansion to the bleak resource management game that hit PC last year. The Little Ones add more items, more locations, and the aforementioned children. For anyone who was able to easily make the hard decisions from the base game (namely, who has to starve to death because there isn't enough food to go around) this shift might change that. A child dying will devastate morale, yet they are too young to contribute much to the household. This added burden definitely puts an extra wrinkle into the proceedings. Bring tissues. SB 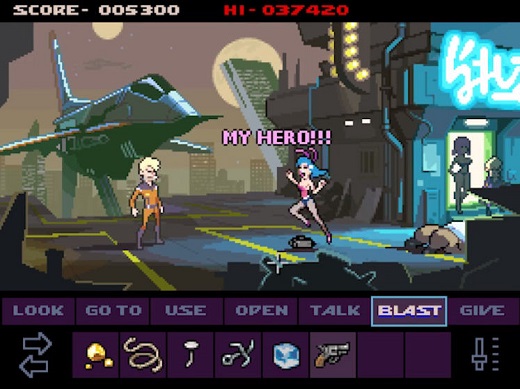 Starr Mazer While still early in development, Starr Mazer has tons and tons of potential. Originally a Kickstarted project, Adult Swim Games swooped in and is helping bring the game to fruition. This anime-inspired, shoot ‘em up crossed with a 90's point-and-click adventure game oozes style and presses down hard on the nostalgia button. It's still rough around the edges (it's in early alpha at the moment) but Starr Mazer is one of the more memorable games I saw on the entire floor. SB 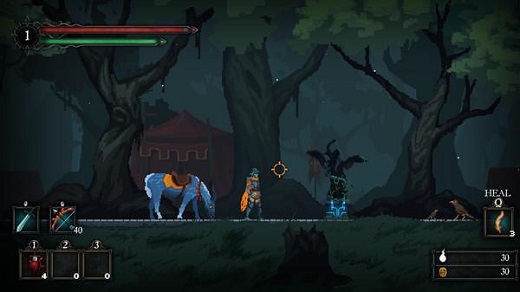 Adult Swim Speaking of Adult Swim, I know that they've been doing good stuff for a while, but it really struck me at this show that the curation of the content that they're publishing is actually outstanding. Whoever is picking and choosing the titles has a sharp eye, and their booth's lineup was impressive. Everything they had was slightly off-kilter and weird, but in the best possible sense. I was definitely into Starr Mazer, but the strong visual presence of Rain World was intriguing, and Death's Gambit (seen above) is essentially a 2D Dark Souls that's coming to the PS4 – and it was great. Anyone interested in indies and alternative experiences should definitely be keeping an eye on Adult Swim. I don't think many people paid much attention to them at the beginning, but they're quickly becoming a force. BG 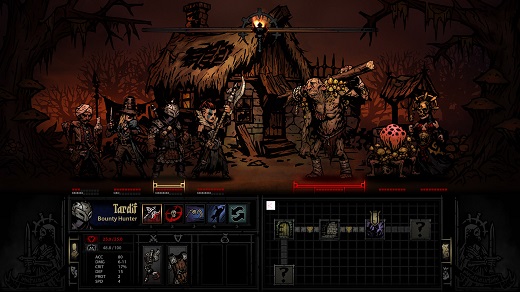 Darkest Dungeon The PAX 10 had strong titles on display this year. One was Assault Android Cactus (written up on Day One) but it wasn't the only notable. Another one that had me drooling for more was Darkest Dungeon, which has been on Steam Early Access for some time. I know that it's been going through some development woes and push-back from the fans recently, but what was being shown today was quite strong and this 2D roguelike dungeon-crawler was incredibly appealing with gothically-morbid visuals and a strong sense of tactics. I wouldn't ordinarily have chosen this one to write about, but the developers say that it's coming to PS4 and Vita, which is beautiful music to my ears. I've been wanting to play for a while now, but I have a very hard time planting myself in front of a PC for gaming. Now, I don't have to. BG 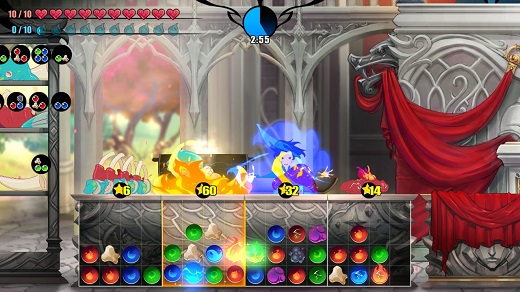 Battle Chef Brigade The other game I want to spotlight from the PAX 10 was Battle Chef Brigade, which was a wonderfully absurd and captivating project. Basically, you play as a girl who's competing in an Iron Chef-style tournament, but the game is broken up into different sections. First, in order to collect ingredients, the player has to literally run outside and kill animals to collect their pieces. This part plays like an action platformer, complete with special moves and combos.  Once the animals are chopped up, they're brought back in the kitchen and each piece of meat has a specific "ingredient" profile which is represented by orbs of various colors.  The chef then takes these pieces, puts them in a pot, and then the game becomes a Puyo Puyo-like task of creating harmonious flavors by aligning colors into combos. It sounds totally absurd, but I found it incredibly appealing, and a mashup that really worked. It was good, good stuff. BG

…And with that, we bring our coverage of PAX Prime 2015 to a close. We hope you've enjoyed the selections we hand-picked out of the ocean of games being shown on the floor, and we thank you for checking back with us each day. Let's do it again next year, shall we?