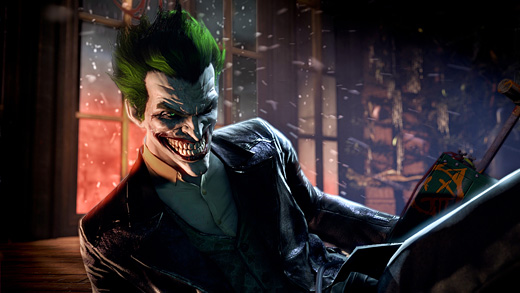 Today was the second day of PAX Prime 2013, and I'm a little sad to report that it's been a bit disappointing.

When I come to the show, I'm mostly here to check out the games. This year, it's been harder than ever, and frustration has been creeping in. The biggest problem is how crowded the floor is. I mentioned this yesterday, and today was even more packed.

The Indie Megabooth has a fantastic lineup that I would really like to examine in-depth, but it's so smashed in there that you can barely even walk. At one point I was actually getting carried along by a crush of people walking in the opposite direction.

I eventually got tired of trying to physically fight the sea of PAX-goers in the Megabooth and moved on, but it was little better elsewhere. Many of the booths had queues with snaking lines, and some even capped off the lines an hour (or more) before the show was due to close. Having a string of appointments with different developers and publishers throughout the day, I just can't afford to stand in line for an hour to play something for 5 minutes.

In this regard, special jeers go out to Microsoft for their booth. Everything is roped off, tightly controlled (NO PICTURES!!!) and every title has a queue. I tried to grab one of the PR folks to see if I could arrange for a time to come in and get a few minutes with a couple of the titles, and the response was "get here when there's no line."

Look, I get that PAX is not specifically for games media, but give me a break. We're all busting our asses trying to give coverage to the slew of games at the show, and there's never enough time for everything. With a response like that, I had no choice but to write Microsoft off, and I won't be covering any of their titles when there are so many other deserving ones.

With this in mind, I found it very interesting that Sony's booth was wide open from every angle, and it was quite easy to get some time with the games on display, even when the crowd was thick. Comparing these two, it seems like some rough parallels can be drawn between the booth designs and their corporate strategies, oddly enough…

So anyway, enough bitching and on with the games! 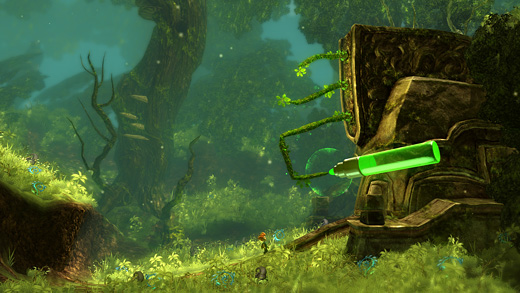 Max: The Curse of Brotherhood (Xbox 360, Xbox One)

This was a cute one from Press Play, the same developers who put out Max & the Magic Marker back in 2011. It took me a little while to make the connection, but when I finally did, the developers laughed a bit and said that they felt their first attempt at this concept never really captured what they were going for. They decided to give it a second shot, and I think they've been much more successful this time around.

The titular Max has his brother taken away to another dimension after making a very Labyrinth-esque wish, and immediately regrets what he's done. He goes in after his sib, and requires the ability to control a (wait for it) magical marker which can affect the environment in various ways. The developers promised minimal combat, and a heavy focus on using the marker to solve puzzles. Although the story seems to take a slightly dark turn towards the end, it looks like something that would be a good title for parents to play with their kids, and I mean that in the best possible sense. 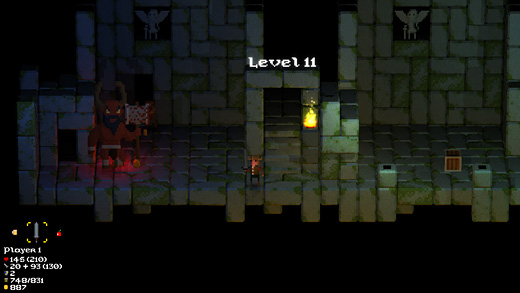 This one is a cross between a beat-'em-up and a Roguelike, and it looks like a great time. It's actually the third title from Robot Loves Kitty, who were also responsible for Neverdaunt 8Bit and Tiny Plumbers. The goal is to get to a treasure on the 26th floor of a dungeon, and then get back to the surface with it. When asked how difficult this was, the programmer told me "I've never finished it." With up to four players in co-op, over 50 weapons to choose from, and a very pleasing aesthetic style, this one looks like a winner. 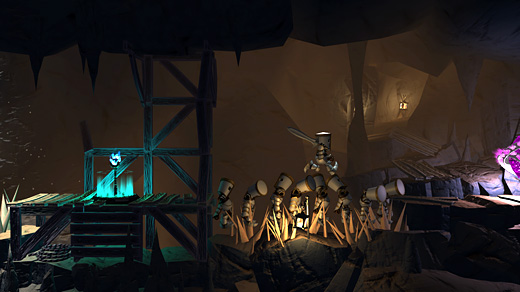 I didn't get to spend as much time with this one as I wanted to, but I love the premise: the game is broken up into small puzzles which are solved by throwing an army of knights to their doom. Can't cross that it full of spikes? No problem, just have a knight impale himself on the first section, have another step on the body of the first and then die on the next section, and then have a third step on both of their bodies and hop off to the exit. It's grimly hilarious, and the developers are letting PAX attendees name individual knights and record their voices for the insane number of death animations that the average player will experience on the way to victory. 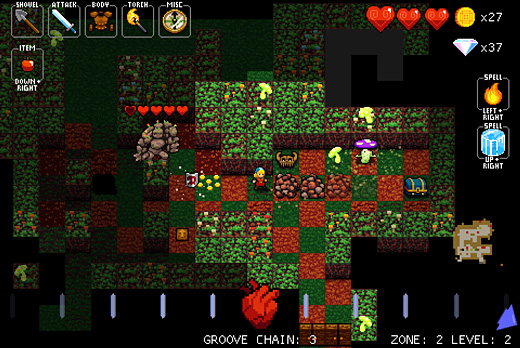 Crypt of the NecroDancer (PC)

This was the game that everyone was talking about on the show floor. It's essentially a Roguelike, but the twist is that the player must move in time to the beat of an absolutely fantastic pumping soundtrack. The synergy between the measured movement of this genre and the bass thumps being pumped through my headphones was a strangely perfect fit, and the two elements combined into a memorable experience. For those who want to play the hard mode, the game is also compatible with a dance pad! 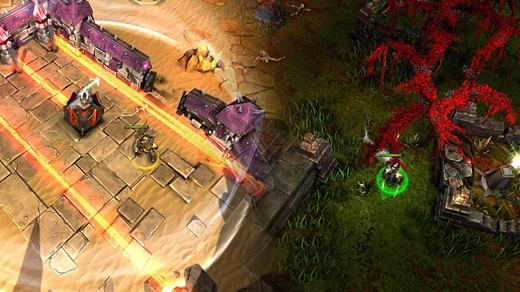 Although I can't say that the care much for the title, this top-down Diablo-esque game has a unique twist: up to four players can cooperate in each level, but the hook is that there's a special orb that must be used to complete objectives. While fighting off enemies, players give this magical orb directions, and try to make it activate things in the environment like traps or gates. It can also give the controlling player some ability buffs that the other three must do without until they regain control, so it was a nice little layer of play on top of a solid formula. 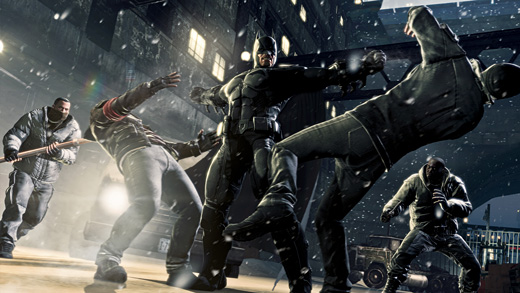 So, as someone who absolutely loved Arkham Asylum but was bored to tears with Arkham City, it seems like switching developers from Rocksteady to WB Montreal might have been the best possible thing for the next installment in this series. After getting an in-depth walkthrough of two chunky sections, I was liking what I was seeing.

Although the core of the game is the same (open-world, gadgets, rhythm-like combat) the developers seem to have gotten the sense of what went wrong in City and have actively worked to change it. The biggest thing was that they wanted Origins to have a more organic story, and for Gotham to feel less like a contrivance. To these ends, there are many shifts such as buildings being more vertical, crimes-in-progress picked up as police chatter, and Batman actually using his detective skills to figure out what's happening in a much larger way.

As an example, I was shown an event where a helicopter crashes into a building and the pilot was killed on impact. Batman arrives on the scene and uses his Detective Vision and the Batcomputer to create a virtual reconstruction of the events he just witnessed. (It's possible to watch and rewind this 3D footage.)

By tracing the fall path, Batman found the location where some of the wreckage landed, and then did another reconstruction. At this point, it was noticed that a sniper bullet hit the helicopter from a distant building, so we went to that scene and found clues which led to the discovery of an arch-villain loose in the city. 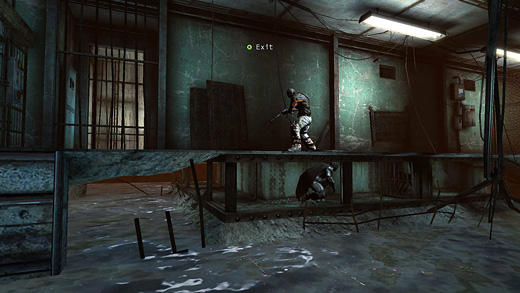 This sequence was great, and really made me feel as though I was solving a crime. It was also incredibly effective as a natural way to introduce a powerful bad guy loose in the city… After all, not every villain introduces himself to Batman head-on. The scene was clearly suggesting that someone was trying to keep his (or her) presence under wraps, and now Batman was on their trail. The developers told me that there were several sequences like this, and each one lead to a reveal of a major (and optional) sidequest that can be done either before or after the main story line is completed.

Other tweaks included some new gadgets like the Remote Claw. This particular piece of tech can be shot to a target, and once it attaches, it shoots a second claw to another target somewhere in the room. By doing this, it's easy to set up a line near the ceiling where Batman can perch in order to get a better vantage point on the bad guys, or it can be used to attach two enemies together. Watching the claw retract for a double KO when the skulls of hapless henchmen collided with each other was priceless.

As an FYI, pre-orders will receive Deathstroke as an optional character to use in the Challenge mode, and he also comes with a special map with a hundred-enemy takedown as the objective. He can't be used in the story mode, but fans of that character should be aware that it's being offered.

In my final bit of Batman for the evening, I also spent some time with Arkham Origins: Blackgate on the Vita. This installment is a prequel to the console version of Origins, and features Batman's first meeting with Catwoman. After that sequence, Batman goes to Blackgate prison to take down three separate bosses, each controlling their own discrete area.

I wasn't quite sure how Batman would translate into being a 2D metroidvania, but the answer is "very well." Although things were pared down a bit, it looked quite sharp on the Vita's screen and going through the environments was quite faithful to what Arkham fans would expect.