Today was day three of PAX 2013, and although I did see some good things, my sense of the show overall is that the industry is holding its breath a bit.

With the impending release of both the Xbox One and the PlayStation 4, it seems pretty clear that a big chunk of people are still trying to figure things out—while the indie scene was fantastic and the PC side was strong as well, there wasn't a lot on consoles that impressed me this year. It makes perfect sense, but I left the show floor with a vague "is this it?" feeling.

That's not to take away from the good things that I did see, however. Here's what I saw today… 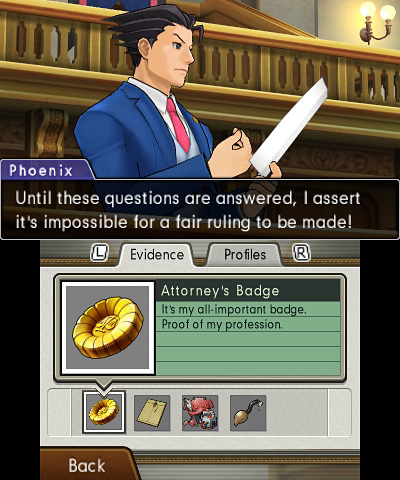 After an extended absence and a couple of games with different characters in the lead role, the Ace Attorney franchise finally gets its true star back. I couldn't be happier to see Phoenix return, and I'm hopeful that the writing will be as entertaining as it has been in the past. This time around, he's accompanied by a new rookie attorney named Athena Cykes. Apollo Justice also makes an appearance, along with a few other faces that will certainly be familiar to fans. It's hard to get a good grasp of such a story-heavy game when doing a quick demo on the floor, but all the pieces seem to be in place and the new rendered-in-3D graphics look sharp, while retaining the same charm they had in 2D. 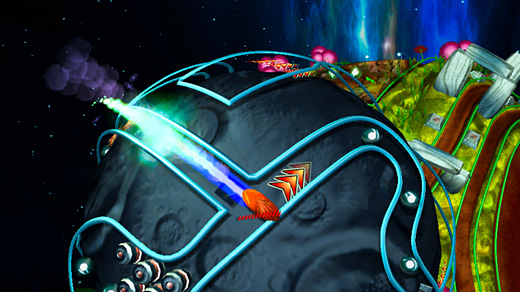 I first saw this game back in 2011, and I thought it looked good even then. However, the team had some issues, and it fell off the radar for a while. Now they're back up to speed and I was quite glad to see this cute little armadillo reappear. Gameplay can be described as a mix between Super Mario Galaxy and a Sonic the Hedgehog that doesn't suck, and its colorful graphics and immediate appeal will be a perfect fit for the Wii U eShop sometime in the first quarter of 2014. 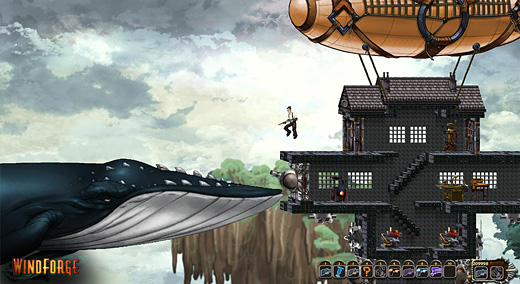 Out of all the games I saw at PAX, this was one of the few that was genuinely dripping with awesome. Although the game is quite early and it was running in a very, very rough state, the overall concept captured my attention immediately.

Essentially, the game's world is sort of an airborne place that's populated with flying house-ships and skywhales. Players can pilot the houses around and when encountering another one, combat can happen between them as if they were pirate vessels side by side on the open sea. The people inside can move around the house and jump from one structure to the next, so there was a great interplay between the larger houses and the smaller people. The houses can also land on islands, and the inhabitants can get out and start exploring, fighting, or mining whatever's there. Oh, and those skywhales? They can be killed and their oil can be used as a resource.

Although Windforge has a long way to go before it's ready for prime time, the aerial 2D Contra-like combat mixed with exploration and a steampunk aesthetic was pure money. I absolutely cannot wait to see this after it's been polished up and massaged for a while. 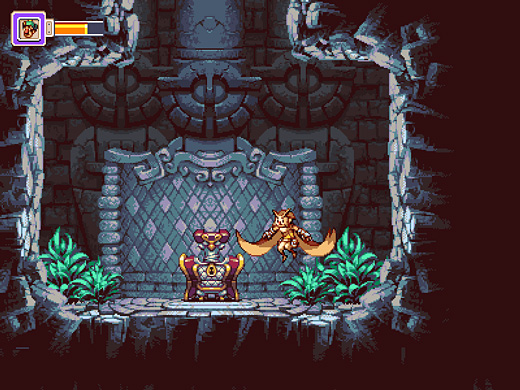 I've seen this game at PAX at least a couple of times, and it still hasn't hit release yet. Hopefully, that will change soon. The art is absolutely adorable, and the action featuring an owl-like character who can fly around and explore various environments is the sort of thing that makes you want to sit right down and start digging into it. If the devs had a 3DS cartridge for sale at their booth, I would have bought it on the spot. Owlboy is yet another indie title that lost its way for a while, but the developers say that they will have a big announcement coming soon. My fingers are crossed, and I'm really hoping for the best on this one. 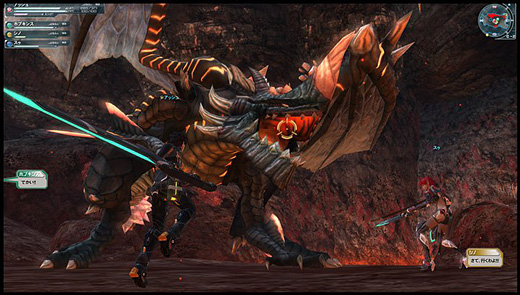 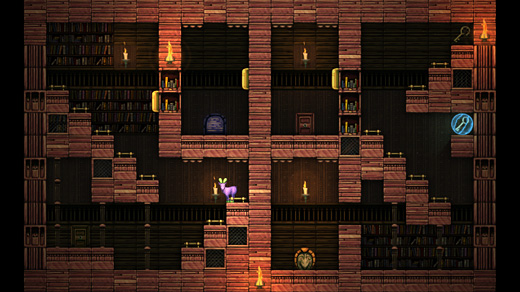 If you've been following this blog for any length of time, you probably know that I'm a huge Escape Goat fan. It was one of my top 10 games in 2011, I have a poster, and I wear the shirt. If someone would create a plushie, it would be on my desk. I am a hardcore Escape Goat fan, so I was quite pleased to see that the sequel was one of the games featured in the PAX 10 this year, and it's looking quite sharp with redone artwork and a richer color palette. The world map has also been revamped, and I've been told that people (like me) who were fascinated with the enigmatic storyline can look forward to certain themes being revealed, and a surprise visual callback.

This one's not really a game, but a new publishing house focusing on indies. I think it's great that more and more avenues for exposure like this one are opening up, and Midnight City's initial lineup of ten games looks quite strong. If they can continue to cherry pick things as good as what we were shown in this trailer, then they are certainly going to be an organization to keep an eye on. 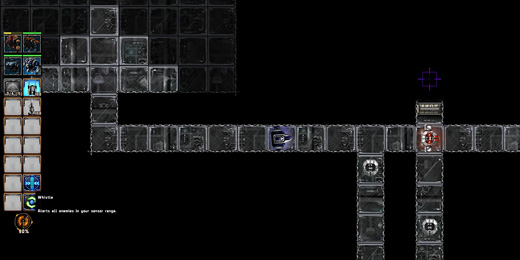 This is another early/rough one to watch, this time from Arcen games. Players have a squad of mechs which can be outfitted with various pieces of equipment and then let loose in a turn-based environment. I can't remember any other titles that feature quasi-roguelike play starring a squad of assault bots, so the fact that this one seemed interesting is kind of a no-brainer. It's got a long way to go, but there's potential there. 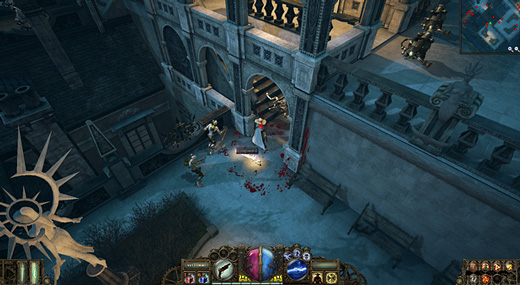 Somewhat related to my comment earlier about the industry holding its breath, I find it fascinating that the first Van Helsing game has yet to make it to XBLA, but the sequel is just about to hit PC. It's essentially a Diablo-esque top-down thing, but I've heard the writing is really what sells it.

However, what caught my attention here is that when Gamecritics staffer Brandon Bales reviewed the original game for us, he said that his favorite parts were the Tower Defense side missions. The PR rep said that she had received that same feedback several times, so the developers took those side missions and made them their own game, now called Deathtrap.

Although Van Helsing 2 looks like a good, solid game, Deathtrap looks like a hell of a lot of fun. Best described as "active Tower Defense" of the sort where you set your towers up and then control a combat-ready character to mop up enemies that slip through your lines, players will be able to set up the usual sorts of towers, in addition to other things like summoning monsters or building cages full of werewolves. 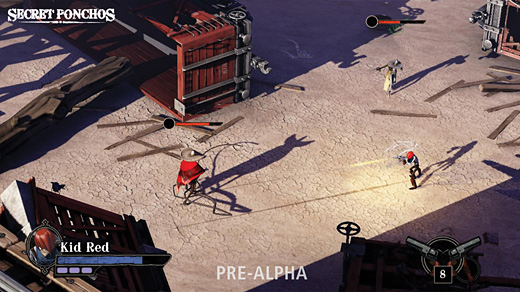 Although there were a number of trends that could be spotted at PAX this year, one that I'm not really a fan of is the trend of developing a game that does not have a true single player campaign, and which also classifies itself as a constantly-evolving piece of work. I don't play games in the MOBA genre, but there's no question that it's had a big effect on the industry. One example is Warframe (covered on Day One) and also this one, Secret Ponchos. These (and many more) have obviously been influenced by MOBA success.

In Ponchos, players choose from one of several Western-themed characters and duke it out in an arena made to look like a homestead that might be found out on the range, somewhere. Each character has a selection of different abilities (one has a shotgun, one has a whip, etc.) and when an enemy is taken out, they quickly respawn and come back for more.

The art direction is quite strong and I found myself drawn to the clean, exaggerated style. The animation was just as detailed, and I admire the work that's been done here. I'm still interested in it to be sure, but I think a lot will depend on how much content is available for people who spend most of their time in a 1P mode. I'm not opposed to jumping online and throwing down with some other people once in awhile, but just knowing my preferences, that sort of game play doesn't sustain me for long. Still, my eye's on it.

Although there's still one more full day of PAX, this will be my final report and Gamecritics will officially wrap the show with a podcast recorded from the floor tomorrow afternoon.

I know for a fact there were several games I didn't get to that were worth investigating and I apologize to any developers whose work was not featured over the last three days, but between the crush of people in the Indie Megabooth and the overcrowded floors everywhere else, it was quite difficult to see everything that I wanted to see.

I'm not sure what can be done about it, but I hope that the Penny Arcade staff will consider the conditions this year and do things a little differently next time. I still love the show and I especially love that it's right in my backyard, but I have to be honest—this was one of the expos I've enjoyed the least in the history of attending PAX due to the large number of people and the general logistics.

I'm hopeful that next year will be better.