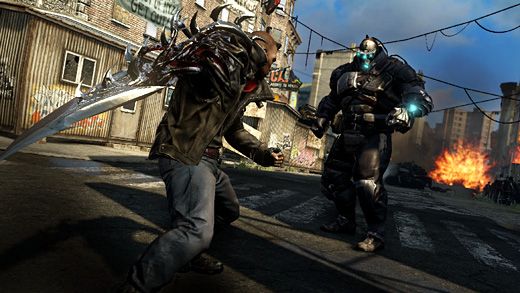 Activision hosted a preview at a local hotel near PAX Prime 2011, and my wife and I got a sneak peek at their lineup.

There's not really much to report about most of those titles, or at least, they didn't catch and hold my attention for more than a minute or two. However, Prototype 2 was the one I was most interested in, and thankfully, it looked great.

I reviewed the original Prototype back in 2009 and had a lot of love for it, even though it needed at least six more months' worth of polish. Despite that, it was impossible not to appreciate the sheer power of main character Alex Mercer and that numerous things that he could do. To say that the game had unfulfilled potential would be a massive understatement, and it's pretty clear that the developers must have felt the same way—Prototype 2 appears to have improved on everything the first game got right, and fixed everything that went wrong.

The presentation was a hands-off demo given by the development team and it was relayed that the build we were looking at was pre-pre-Alpha. In spite of that disclaimer, I didn't notice any immediate problems… for something in such an early stage, it looked fantastic.

On display were an array of powers for a new main character named James Heller, and the devs explained how many of the first game's systems had been re-worked to improve the quality of the content. Instead of the goes-to-eleven, balls-out, constantly-harassed-by-SWAT-teams action overkill the first Prototype tended towards, this rebalancing lets the player control the pace and flow of combat and provides a richer experience. 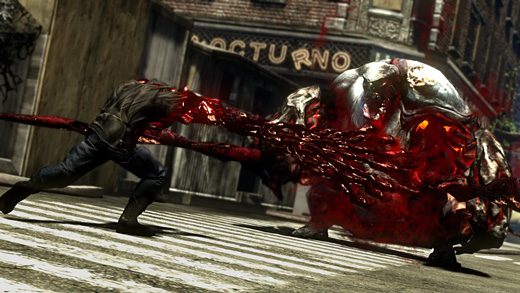 For example, devouring and absorbing certain targets now leads to acquiring new upgrades and entirely new mission trees, whereas in the first game all players got were brief cutscene flashbacks. There's also a new "watching" mechanic that lets players know when they are being observed. By taking advantage of this extra information, certain missions take on a puzzle-like aspect and players who wish to avoid conflict can participate in an extra layer of slower, more methodical gameplay.

Of course, the game wouldn't be Prototype without a heaping helping of violence, and it's here in spades. Heller can equip at least two powers at the same time, there's a new emphasis on differentiation between the types of damage dealt (slashing/explosive/blunt), powers will improve and morph based on how a player uses them, and in general, there's just an unbelievable amount of ass-kicking going on. After all, if a halfway-powered-up Heller can uppercut the hell out of an attack chopper, I shudder to think how powerful a fully-charged character will be.

One other thing of note: I recently played through a large portion of inFamous 2, and one of the things that bothered me was that I found the parkour and navigation in general to be more time-consuming and tedious than I liked. Prototype 2 easily wins this match-up (just like it did last time) by giving the player the ability to jump a mile straight up in the air, to glide to a point that's nearly equal to free-flight, and by retaining the option to run straight up walls at breakneck speed. I don't get a lot of satisfaction from simply traversing distances in open-world games, and watching Heller zip around like a greased lightning bolt definitely put a smile on my face.

As the demonstration wound down to a close, I asked if the game would feature retailer-specific DLC powers. The response was that the developers were aware that no one is a fan of the practice—while they are intending to have some sort of DLC promotion, they clearly stated that they were going out of their way to not punish players by depriving them of one power or another depending on which store they frequented.

That answer? Music to my ears.

is that I wanted to play it immediately… most of my fears about getting a sequel with the same unpolished qualities as the first have been mostly laid to rest, and the bits I saw looked pretty damned good. I'm definitely bumping this one higher up on my most-wanted list.