The third and final day of the Penny Arcade Expo started slow, both for the wife and I, as well as for the rest of the convention-goers.

Taking a look around, more people seemed willing to queue up for coffee or crepes before the show got going. The halls weren't as crowded, and the people who were there seemed to be walking slower, and perhaps sagging a bit. Three days of immersion in pure gaming can take their toll on even the most hard-core games enthusiast, as was evident in our surroundings. That said, it didn't take long to get the fires stoked and the bellows pumping.

The first event of the day was PAX Family Feud, a faithful recreation of the popular game show taking place on the main stage. Like many of the other events at PAX this year, there were some technical issues and things got rolling a little bit late. However, the wait was definitely worth it. 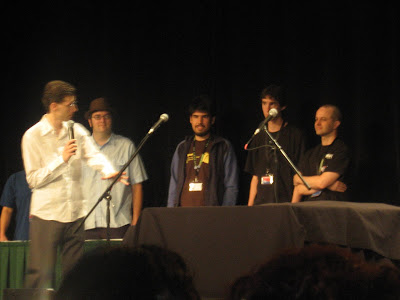 Probably my favorite program of the convention, emcee Alon Waisman of Chatterbox Radio selected contestants from the audience to team up with the developers of PAX 10 titles Schizoid and Strange Attractors, along with two people selected from the listening audience of Waisman's show. Complete with music and sound effects, the Feud was on.

Unfortunately, it was also off soon after it began. The group of contestants not pictured won the competition in a landslide, completely shutting out the opposition. Even so, it was a treat to see categories based on gaming and Penny Arcade culture. The questions were: 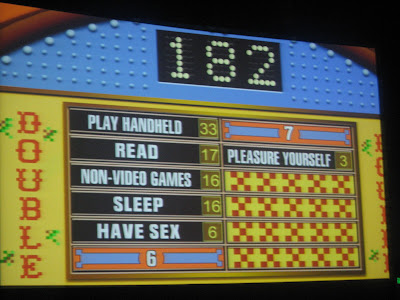 This final question… well, let's just say that the answers speak for themselves. Also, I'd like to draw your attention to exactly where on the survey those answers placed. Interesting.

Believe it or not, I still didn't manage to complete my tour of the Exhibition Floor by the end of Day Two, so we headed back to polish off the stragglers. 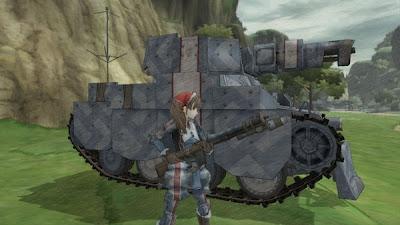 First on the list was a brief chat with Sega's Christopher Kaminski on the subject of Valkyria Chronicles, as well as the upcoming Madworld.

An extremely nice guy, Kaminski went through the finer points of Valkyria for me, making sure to point out that players would have tank units to control and five different classes of infantry, with over 50 characters to choose from. The art style of the game was quite appealing, and the blend of action and turn-based elements gave a slightly different flavor to the gameplay. After stating that he was an X-Com fan, I felt confident that the game was in the right hands. 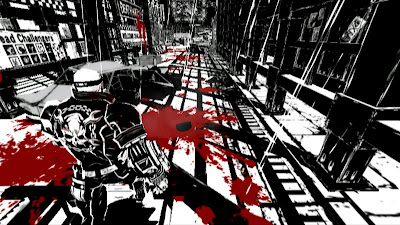 Although Madworld was not on display at PAX, Kaminski was quite forthcoming in discussing the Wii-exclusive hyperviolent title. When asked what the motivation was behind the game, he stated that the development team headed in the direction they did as a way of generating content for "core" players who have felt abandoned by lack of diversity in the Wii's releases.

When asked whether Nintendo gave any push-back regarding the quality of the content, the response was that they were extremely supportive and clearly understood the need to fill gaps in their library, though they are hesitant to fill them with first-party titles since such games do not fit the current Nintendo profile. Unable to give any details on Wii-specific controls, the only information available was that the game would use the Wiimote-Nunchuk configuration.

Immediately following, Mabel Chung walked me through Yakuza 2, due to hit stores in approximately 2 weeks with an MSRP of $29.99. 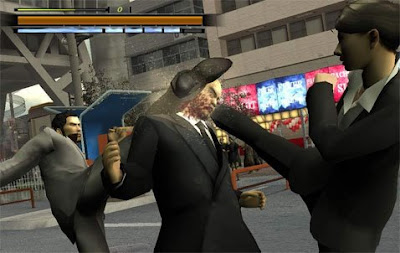 Set one year after the events of the first game, Kiryu Kazama gets dragged into the mob life against his will, and his only choice is to set things right. (Surprise!) I was a huge fan of Yakuza personally, and the fact that this game is getting a release is extremely good news, in my opinion. Although the answer was an official "No Comment" when quizzed on the subjects of the PS3's Yakuza 3 or the Yakuza game set in feudal times, Chung mentioned that the game will have the Japanese voices with English subtitles, a greater emphasis on "heat" maneuvers in combat, and that a "lock-on" function should help to alleviate problems gamers had with the first title's one-on-one boss fights. 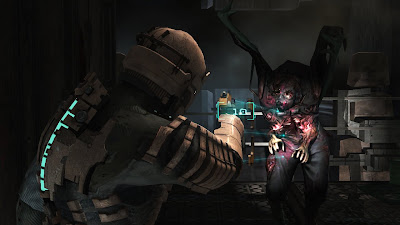 Moving on to the other end of the hall, Senior Producer Chuck Beaver gave me the skinny on Dead Space. Although it's been impossible not to notice the game over the last few months, finally getting hands-on and seeing the title with my own eyes convinced me that the game can deliver the goods. The disgusting aliens came fast and furious, and navigating through zero-G environments was a little mind bending, in a good way. With the main character's magnetic boots, it's possible to leap from one wall across a vast, open area and land on the opposite wall, the ceiling, or the floor, with bits and pieces severed from the enemies remain floating where they were detached. I also admired the HUD-free aesthetic, with vital information on the character displayed via lights on the back of his suit, and the traditional item screen replaced by a holographic display manipulated in real-time. Good stuff. 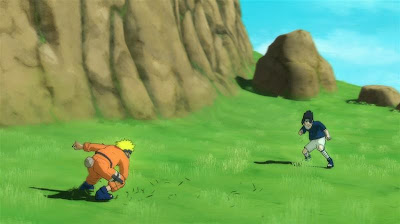 Rounding out the afternoon was a stop at Namco's booth. Although I'm not much of a fan, Naruto: Ultimate Ninja Storm had some pretty incredible animation, looking like anime brought into the third dimension flawlessly. 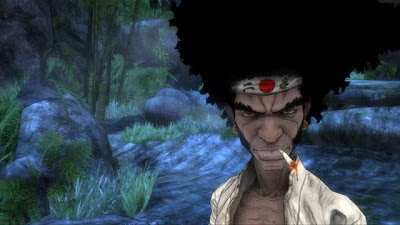 Afro Samurai was also on my to-see list, but the game in person did not live up to the sheer coolness of the trailers. Although the graphics and style are admirable, the demo on display bored me almost instantly with a swarm of generic enemies, each taking a dozen sword slashes before falling to the ground. A focused "super" move was also at my disposal to cleave enemies in two, but it was a hassle to have to use this feature just to get through the peons faster. I realize that this is just a demo and the game could get better past the opening phase, but I have a sneaking suspicion that it… won't.

At this point, I had completed my tour of the Exhibition Floor, and I realized that with this part of the show getting so much bigger than it was last year, I had virtually no time for any of the panels or programs that were running at the same time. Checking the schedule and seeing that most of the things I wanted to see were already over, the wife and I packed it in and headed out for a nice lunch to celebrate the close of the show for us. As we noshed, we each compared notes and came up with our respective lists for games of show.

Mike Krahulik and Jerry Holkins (and the rest of the PAX crew) did an outstanding job of putting the show together, so our profound thanks and deep appreciation go out to them for hosting it. It was a great way to spend a weekend, and we're looking forward to doing it again next year.

P.S. – What convention coverage would be complete without a photo gallery of the odds and ends? Here's the wrapup. Enjoy! 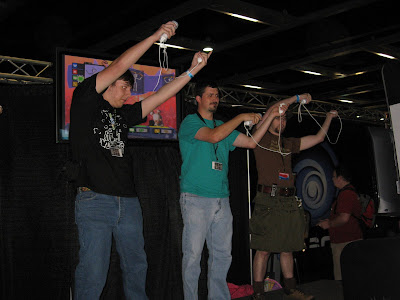 Dignified. Reserved. These are the people who come to PAX. 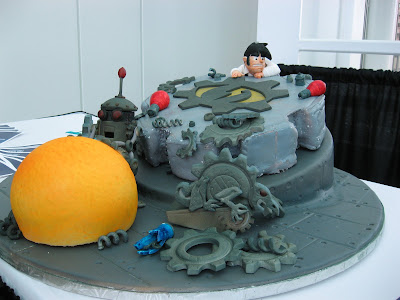 A Rain-Slick cake made by Brian Kurtz of Layers of Illusion. His card says his cakes will make guests "crap their pants in disbelief." Great cake, but mine remained unsoiled. 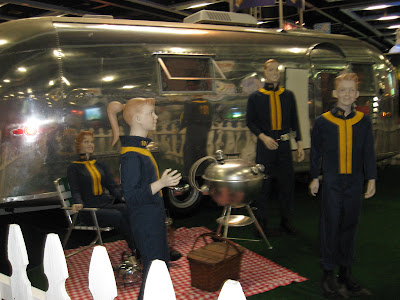 The family of the future grills with nuclear power. 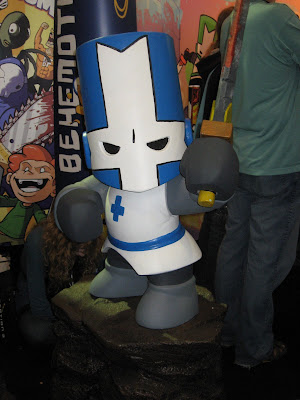 I may not be a fan of Castle Crashers, but this li'l guy was just too cute. 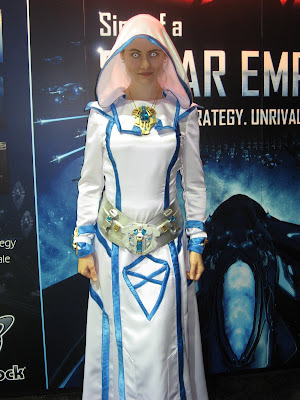 Her eyes match her robe. Neat! 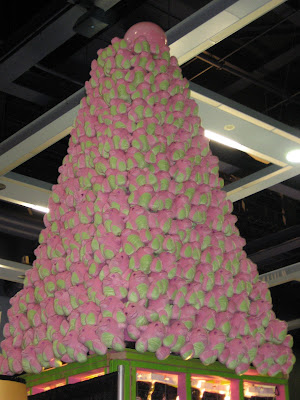 Where else but PAx can you see a giant mountain of pink Godzillas. (Godzillii?) 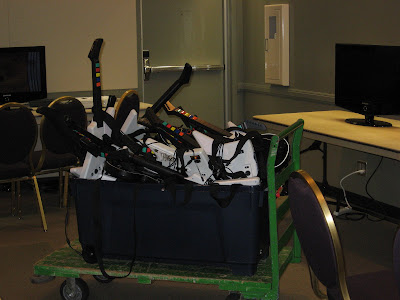 Was Rock Band was popular at PAX? I'm thinking yes. 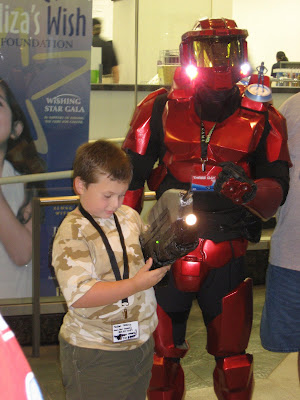 Master Chief gives a lesson on the safe use of futuristic armament. 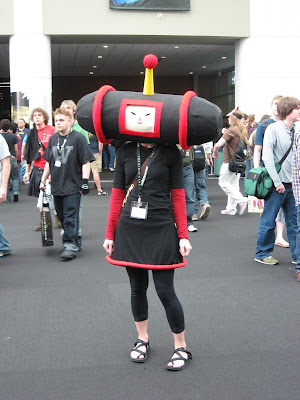 The soundtrack playing behind her was kickin'. 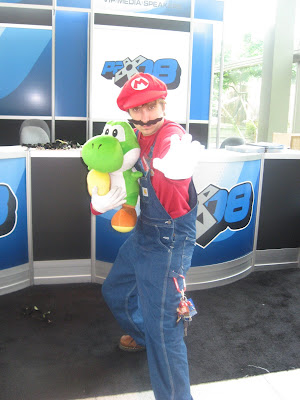 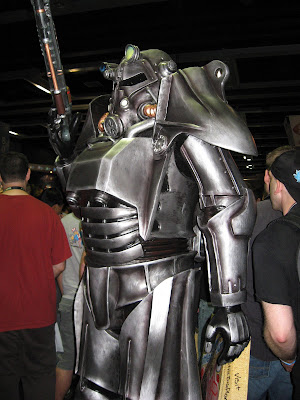 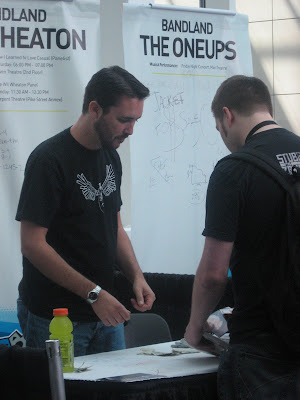 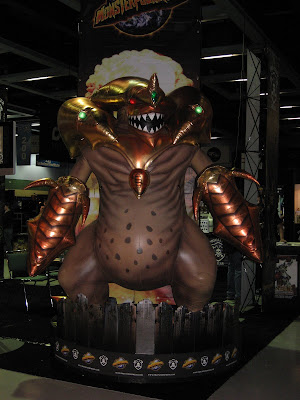 No idea what this was for, but it's my policy to snap monster pics when I can. 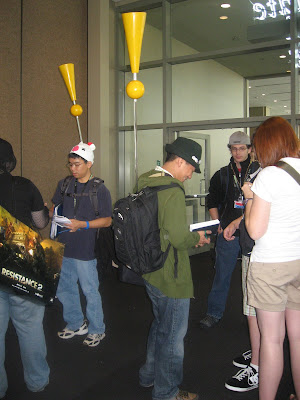 The award for most incomplete MGS costumes goes to… 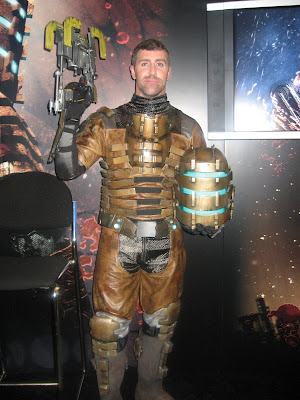 After playing the game, I don't envy the Dead Space Engineer one bit. 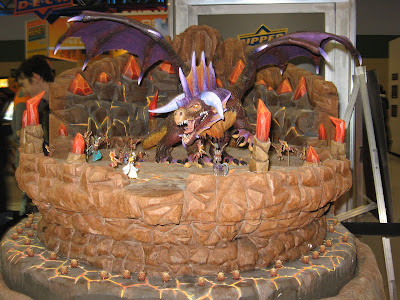 This also looks like a cake, but it's really a diorama. Pants-crapping avoided again. 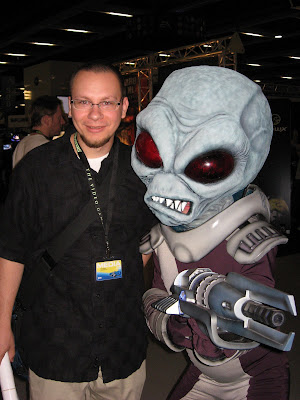 Gah, who's that scary-looking dude with Crypto?!?

Yeah, i knew that… it was just suposed to be a silly/sarcastic comment. ; )

not sure if you know but that is the suit from fallout 3.