Once again, the good people at Penny Arcade are hosting their Expo in the heart of the emerald city. 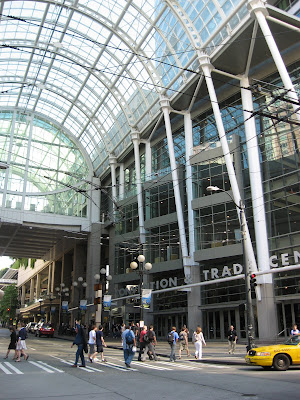 Although the idea may be discouraged by Jerry Holkins and Mike Krahulik, (the super-popular webcomic's writer and artist, respectively) the fact remains that the Penny Arcade Expo, or PAX for short, is quickly becoming the de facto place to go or those in the games industry who want to be seen, now that E3 is a mere shadow of its former self and E for All seems to be a non-starter. 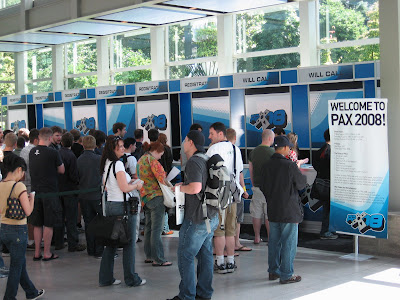 Taking place in the Washington State Trade and Convention Center in downtown Seattle, the joint was packed—and although no official numbers had been released at the time of this posting, certain Expo officials have anecdotally estimated that attendance was estimated to be close to double last year's.

Today's post will summarize PAX Day One, starting with the biggest draw for me, personally… the games.

I arrived early to take advantage of the press-only window of opportunity in the Exhibition Hall, and I was glad I did since the line of convention-goers waiting to get in was thick and deep. Once inside, the display space was markedly larger than last year's. Although still not on scale with the behemoth that was E3 in its prime, the scene is definitely beginning to leave its humble beginnings behind and evolve into something quite respectable. As an example, I covered the Exhibition floor in just a few hours last year, and this year I only got through half on my first day.

Here's some quick impressions of what I saw so far: 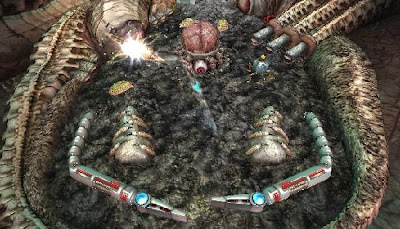 Out of all the games I took in, this one probably got me the most geeked-out. Being a huge fan of the Crush titles on the TurboGrafx-16, I'm of the opinion that a new installment in this series is long overdue. Basically a pinball game taking place on Giger-esque fantasy boards created from bits and pieces of alien biology sporting updated graphics and new modes… I'm already sold. 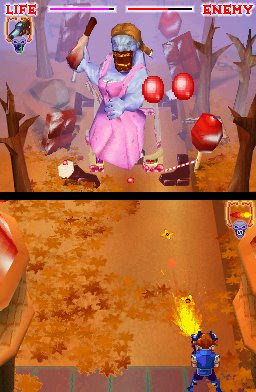 As if the title itself wasn't enough to clue you in to what sort of experience to expect, this screenshot sort of says it all. Jeremy Zoss of Destineer gave a short demo of gameplay, and it was looking good. Red hangs out at the bottom of the screen while the environment auto-scrolls to bring zombies, monsters, and all sorts of baddies to be blasted. 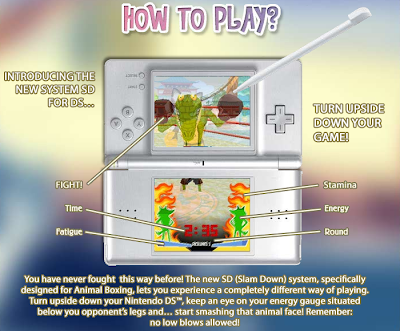 Another in Destineer's stable, Animal Boxing is the first game to play with the DS inverted, meaning that the touch screen is held at the top. All punches are thrown via the stylus, and the art style was bright and attractive. When I asked whether or not there would be anthropomorphic hook-ups between matches, Zoss declined to comment. 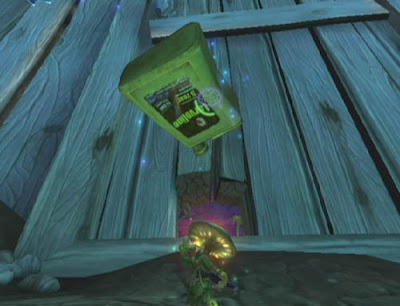 Looking much more interesting and attractive in person than it does in screenshots or in previews, Mushroom Men appears to be a quirky adventure game with a great sense of weirdness and dark overtones. After her hands-on, I'm much more interested in this title than I was before… I think knocking a box fan onto a rabbit with my ‘spore powers' and chopping it up into bits of fur may have had something to do with that. 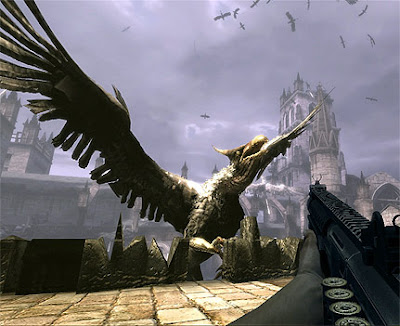 This one's been getting a lot of coverage lately, and with good reason. Going after mythological creatures with heavy-duty fire arms seems like a can't-miss. The demo looked very solid to me, so I'll be giving this a closer look when it hits. 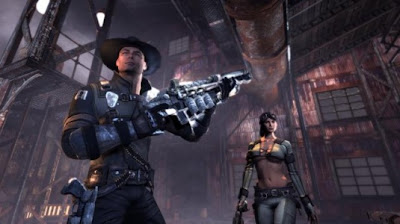 illed as a shooter with vertical elements, Damnation reminded me strongly of Gears of War blended with more open levels and some light platforming. The brief demo consisted of starting on a cliff and making my way to a bridge in the distance. The rep on hand stated that there were several ways to get to the objective, and that scaling buildings and finding your own path are part of the appeal. I liked what I saw. 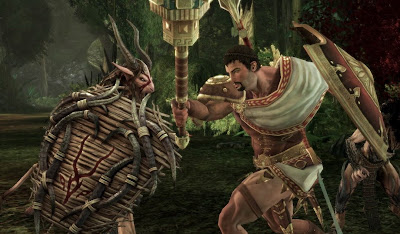 More than anything else I saw today, this game stands out as one I'd be fairly confident buying new, and at full-price. Taking some brutal combat and combining it with Greek mythology and some streamlined doses of RPG structure, I was getting pretty excited to get my hands on the title as Liquid Entertaiment's Andrew Rubino gave an outstanding talk-through and demo. Actually reminiscent of BioWare's console efforts, the ship used as transport between the islands serves as a ‘home base' of sorts where you can chat with your teammates and access various resources. Also sporting dialog trees and outcomes in the game which are greatly weighted by the player's choices, the developers seem to have made some great choices in their design phase. 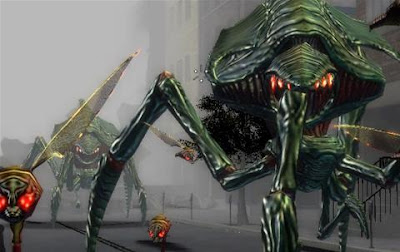 Eric Nofsinger of High Voltage Software was a great ambassador for this anticipated Wii title. Graphically, it looked a cut above any other action title on the Wii, and some of the weapons looked interesting. When asked what made his game more than just a standard shooter on a system lacking them, Nofsinger commented that the title has a very deep back story and history tucked away for those who care to seek it out, in addition to Wiimote-specific twists on weaponry.

The Rest of Day One's Games:

Darksiders must have been running a very early build, since it was quite choppy and tough to play. The character design was nice, but it was hard to get a good sense of what the action would be like.

Puzzle Quest: Galactrix, the sequel to the incredibly addicting Puzzle Quest: Challenge of the Warlords was looking good despite a lackluster presentation by the rep. New features include variable gravity to affect the refresh patterns of the gems, and a wealth of different spacecraft to use in "battle."

Nintendo's booth (except for The Conduit) was looking quite sad and pathetic. I can't help but think they must have some secret weapons up their sleeve for the holiday season, because what was on display was less than impressive, to say the least. A snowboarding title, Wii Music, a Mario baseball title, a Wario title, and Animal Crossing which looked exactly the same as the N64 version. None of the above had the sort of star power associated with Nintendo's top franchises, and I can't help but think that many Wii owners are going to be disappointed come Christmas time.

Onechanbara: Bikini Samurai Squad was only on display as a video trailer running on a monitor, but it was enough to set off my fringe-o-meter. From what I can tell, this game has been tagged for a while as one of the most outlandish examples of Japanese wackiness, so I was little surprised to see it on display. Then again, zombies, swords, and girls in bikinis… what's not to like?

The Maw, for Xbox Live Arcade, was looking quite fresh and interesting. From the video I saw, it appeared that two aliens escape from captivity; one with brains and one with a mouth. The player seems to control the smart one, and feeds enemies and obstacles to his companion in order to give him a new powers and grow him in size. For an XBLA title, it was impressive.

The cinematic shown for Warhammer Online: Age of Reckoning was one of the most impressive pieces of CG I've ever seen, easily eclipsing 99% of anything Hollywood's ever turned out. I've got no interest in the game, but I definitely recommend viewing the trailer online.

At about this point in the afternoon, my schedule was telling me that it was time to head over to the main theater and get ready for the keynote address, given this year by Ken Levine of Bioshock fame. 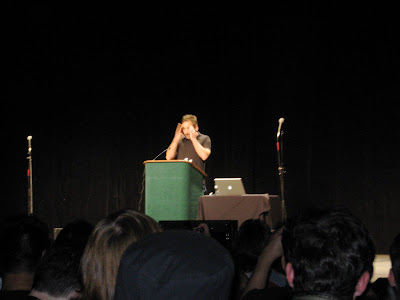 Starting thirty minutes late and after attendants had filed into the hall haphazardly and disorganized, Levine launched into his presentation which was quite amusing at times, supported by some hilarious visuals on PowerPoint. I must say, his speech with tons of D&D references was the first time I've ever heard anyone refer to his birth as "parents rolling his character." The gist of his time was about nerds and geeks (as he called himself) finding their tribe, and it struck a chord with most of the audience.

Following Levine was a symphony heralding the arrival of Holkins and Krahulik onstage for part one of their traditional audience Q&A. Always amusing, their back-and-forth banter seems more like a polished comedy routine than two comic strip creators on a stage. 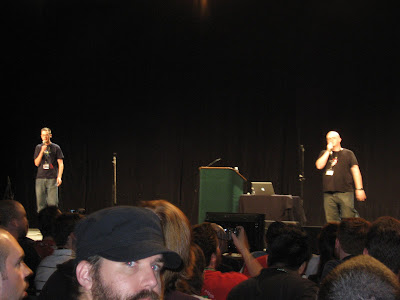 Dude, I'm NOT looking at you, I swear.

Highlights of this segment included everyone in the audience cracking their knuckles simultaneously (the result is an incredibly horrific and disgusting sound), a brief snippet of Holkins' song "Are You Really A Woman", and the announcement that there will be a PAX occurring on the East Coast sometime in the year 2010. Although no specific date was nailed down, it was confirmed that the East and West shows will not overlap. After that, general hilarity ensued. 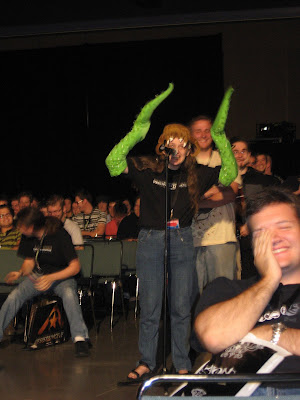 In what can only be described as the most pathetic display of fandom I've ever seen, this girl clad in tentacles and what looked like a headcrab waited in line to get her chance at the mic… only to grunt, groan and flail before skulking off into the crowd.

That's it for Day One coverage, check back tomorrow for Day Two.