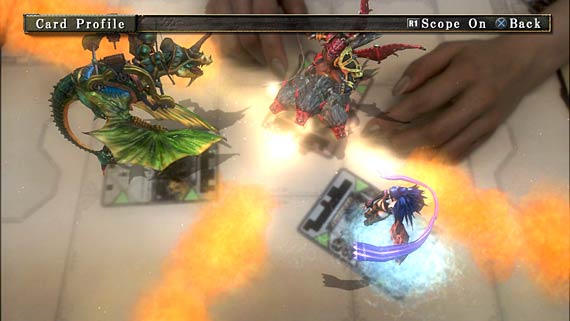 I don’t know if anybody’s been following this (I know that I haven’t), but one of the new things that I saw in the exhibition section of the PAX was Eye of Judgement for the PS3.

It’s a new hybrid of trading card game and videogame where players have a match on a 3 x 3 grid. At one end of the grid is Sony’s new Eyetoy-ish camera, mounted on a little stand and pointed down onto the grid. Wizards of the Coast is a partner in this, and the cards they’ve produced can be played without the PS3.

The point of this is that when a card is placed under the camera, the camera recognizes which specific card it is and generates a 3D image floating above the card on the TV screen. It’s a little hard to explain  but it’s an amazing effect the first time you see it. You can hold the card in your hand and tilt it, and the animated character will move and tilt properly along with your hand. Pretty trippy stuff.

The cards get laid down on the 3 x 3 grid, and then the PS3 generates these characters on screen according to where they are, which direction they’re facing, and what type of “land” they’re sitting on. From there, it plays out like Magic or Culdcept and I’m sure most of you will get the idea. Card game nuts (like me) might want consider buying the console to play it. 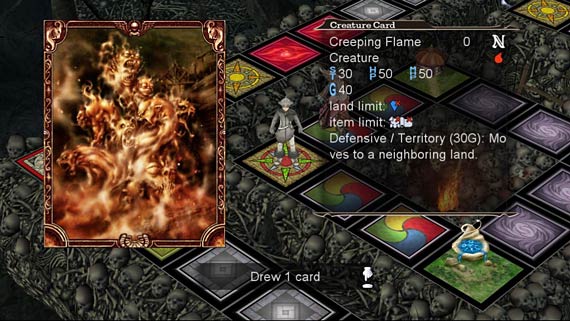 Speaking of card games, I saw Culdcept Saga on display and it looks good. I only saw little bits of it, but it seems exactly like the first game except for some added 3D characters and improved visuals, nothing major. That’s actually just fine with me, since I thought the first game was unbelievably fantastic. (anyone who hasn’t played it, go out and get a copy for the PS2 immediately.) the rep said that it was definitely confirmed for later this year, but no hard date. I can’t express how much I’m looking forward to playing this game, especially now that online functionality has been added… if it had been included in the first one, I think that Culdcept on PS2 would have been the first game I gave a perfect 10 to.

I was just thinking this morning about Culdcept Saga and how I can’t wait for it to come. The addition of Live multiplayer is the only thing that game needed and I foresee my winter being spent playing it daily. As for Eye of Judgment, the guys at Penny-Arcade have been gushing about it for a while now. I played it at E3 last year for a couple minutes. It seemed pretty neat, but it didn’t work very well and seemed more like a tech demo than a game. Based on the PA praise, it sounds like they’ve added some… Read more »